The Great Quadriceps Contusion of 2014

The fateful day was Monday, July 7, 2014. The time was 13:00h. My daughter and I had just taken my son to daycare, and were going to the local grocer to buy bread and lunch supplies for the day. The day before, when I had gone to the grocery store, it had suddenly begun to rain while I was doing my shopping, and I was without an umbrella. Because they are just such nice people, and our daily relationship is so good, my grocer friend, Andrés, lent me an umbrella to take home for the day. So on that fateful day, I had returned it. As I was leaving the store, I turned around to catch Andrés' attention to make sure he noticed that I had returned the communal umbrella to its spot. He acknowledged it, and I turned to continue walking, with the shopping bag in one hand, and my daughter's hand in the other. That's when it happened. 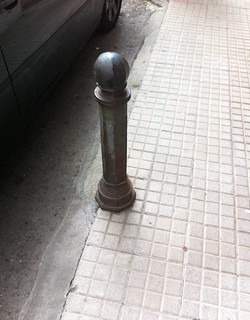 At a very slow walking pace, I had slammed my leg into a bollard jutting out from the sidewalk. My American readers may not even know what a bollard is, since they are not used very often in the States in suburbia where cars and pedestrians don't often mix (since there are none of the latter). A bollard is either a bulbous piece of iron on a dock for boats to tie themselves to, or an iron stake that juts out of the ground on the border of a sidewalk primarily used to keep cars from trying to park on the sidewalk. In my town, it is pretty obvious that whoever manufacturers the bollards made a pretty sizable donation to the election campaign of the local mayor a few years ago, because we have them everywhere, including where no one has ever tried parking on the sidewalk, like in front of this particular store.

Whenever I accidentally come across an immovable object while I'm moving, e.g. stub my toe, bump head on low ceiling, walk into glass door, I'm always amazed at just how much force I'm using to move my body around doing just the most simple non-energetic movements. Like those other accidents, it hurt quite a bit at the moment of impact, and some words other than "Ouch!" escaped my mouth, but I was able to walk it off and wasn't even limping 50 meters later. We dropped off the groceries at home and went out for a walk to get a wine and a grape juice at a local bar. At the bar, however, I sat down for about three minutes, and when I stood up again, it was obvious that something was wrong. It hurt to put pressure on my leg. I was, however, able to limp all the way home. When I got home, I immediately filled a bag with ice and lay down on the couch to ice the knee. When my wife arrived home an hour later, she immediately saw how much pain I was in. My leg had swollen to twice the size of its counterpart. We decided it might be best to go to the emergency room.

The question was, how to get me to the emergency room. At this point I couldn't put any weight on my leg, and my wife and daughter couldn't carry me. I figured out, however, that I could use a dining room chair to support my weight while I took each painful step. Thank goodness we have an elevator! My wife pulled the car up as close to the door of the apartment building as she could, and I managed the three meters to the car in about a minute. While she put the dining room chair in the trunk, I screamingly squeezed myself into the passenger seat. 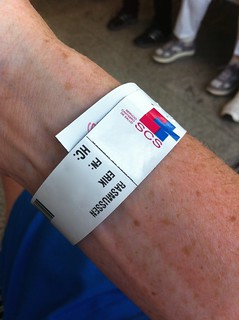 At the ER, a nurse rolled out a wheelchair for me, but it wasn't one of those wheelchairs that lets you have one leg up and straight, so I was constantly having to hold up my leg, which would no longer bend. It turns out that a weekday (especially Monday?) afternoon is a terrible time to be at the ER with a non-critical injury, because I was thrust into the waiting room with people who were complaining about being there for three hours. We quickly decided that my wife should take my daughter to "help out" at daycare for a few hours, as children would not be let through to the examination room later, so she'd have no one to be with. My daughter didn't like it, but she understood. While they were gone and I was there all alone with people who were clearly in no pain whatsoever, a nurse rolled in another patient and rolled over my foot! I involuntarily screamed in pain, which garnered looks from everyone else in the waiting room. On her way past me, the nurse apologized in a manner that I found insincere, but it may have just been my mood at the time.

Eventually my name was called, and I went into the examination room. The doctor was clearly exhausted. She didn't even have me get out of the wheelchair. She took one look and told me to take some ibuprofen and to rest, precisely what I had been doing before deciding to come to the ER to see if it was more serious. As she wrote my prescription (you can get ibuprofen over the counter, but with a prescription, it's slightly cheaper via subsidy), she joked with her nurse companion, "This must be the thousandth prescription I've written today!" 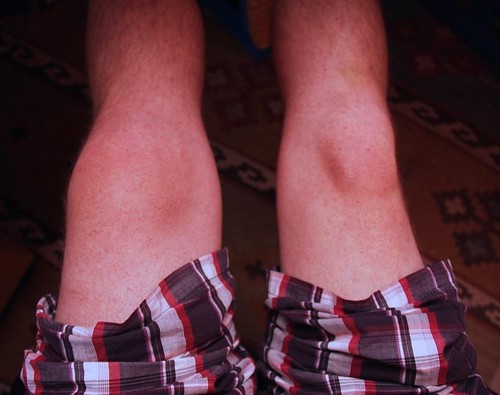 Immediately it was obvious that I would be unable to meet my child care responsibilities the following morning, so we called for reinforcements, my in-laws. Having caring, selfless grandparents willing to care for your kids only 90 minutes away is priceless. The arrived at our house shortly after we did. It also quickly became obvious that I would be better without the kids at home at all. No matter how careful you tell a five year old to be about not hitting your foot that sticks out over the end of the sofa, you're going to get hit. So the next day, they packed up the kids and took them to their house.

This is how I got around the house.

By Thursday, I felt well enough to hobble around the house using only a cane. I even sat at my desk a little bit to do some work. Unfortunately, the following night and day, I paid for my actions. My leg was worse than ever. On Friday, July 11, we decided to go back to the ER early in the morning, right after the shift change brought in fresh eyed staff. What a huge difference that made. They were attentive and examined me thoroughly. They gave me an x-ray, which they said showed no bone damage. Despite the superior attention, the treatment was the same. Lie down, with the foot raised, and don't move. Thus I was sentenced to my couch prison. 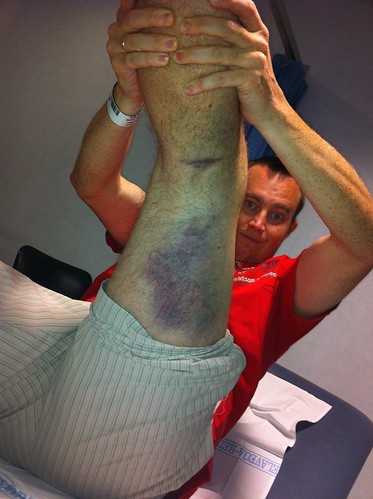 We had been confused as to why there was no bruising on the front of the leg where the accident had happened, but while I was at the ER on Friday, I lifted my leg and we discovered where all the internal bleeding had gone. "Just like what happens to cadavers!", my wife chimed in helpfully.

Any improvement was negligible the first week. I went from using the dining room chair to push my way around to using some borrowed crutches which were too short and too rusty to be adjusted. Later, we decided to buy our own crutches, which were cheaper than we'd feared. But now we have crutches to use for all the accidents that our future surely holds in store for our family.

I saw my personal physician on Monday, Wednesday and Friday of that second week, and she confirmed the treatment of reposo. I got good and sick of lying on the damn couch. I did some reading and consumed vast quantities of television and movies, which sounds like it might be fun, but the lack of freedom was pretty exhausting. 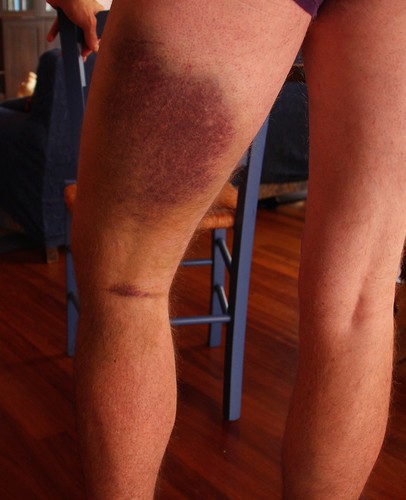 During my extended free time, I did some reading on the injury. Apparently quadriceps contusions are quite common in sports, particularly rugby, and the sports physicians have learned how best to treat it. Ice and rest and elevation, mainly. There's even a nickname for the injury, "dead leg", which seems pretty accurate. The websites about it all say, "The athlete shouldn't play again for twelve weeks." Ugh.

Finally, on Saturday, July 26, after almost three weeks of being sentenced to the couch, I was able to take a walk, slowly and on crutches, with my wife to go have a pizza. The fresh air and freedom was exhilarating! 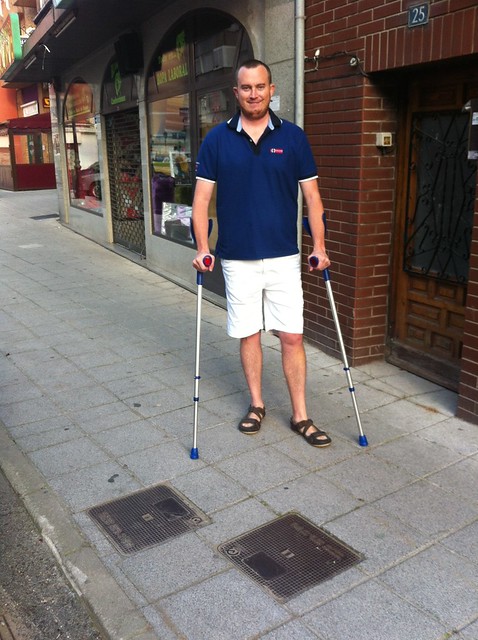 Out about town. To my American readers, the standard crutch design in Europe is one where you support all your weight with your hands, with supports at the back of your forearms, not the armpit style that is used in the States. This is strange to American tourists sometimes, because in America the forearm-support style is usually reserved for people with permanent disabilities.

Since then, I've gone for not-too-short walks every day. As of the time of this writing, I can limp a few steps without crutches, but feel pretty good about walking a kilometer or so with them. 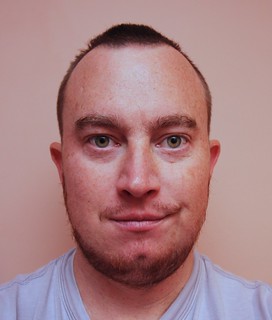 I normally shave in our upstairs bathroom, but I haven't been upstairs for weeks now. Initially that was the excuse for not shaving, but then it became more of a representation of how imprisoned I felt. I don't think I've ever gone three weeks without shaving, since there has been a reason to, and my hermit life made my self consciousness (I don't think I look very good with facial hair) easier to bare. The truth is that many men could grow my three-week beard in about 48 hours, but I'm happy to be on the slow-growth end of that spectrum. Apparently I have little to no hair follicles between my mouth and my chin. Were I to attempt a goatee, it would be two separate patches. Some men weren't meant to have beards; luckily my hair growing abilities are in line with current societal fashion standards.

Now that I'm finally feeling better and seeing the light at the end of the tunnel, I decided to shave it off, but it was an interesting (to me) experiment while it lasted. I'm pleased that I didn't see any gray facial hairs, and many of them were almost reddish. I was quite surprised at how hard it was to shave off. It felt a little like using scissors to mow the lawn, but I managed.

I suspect I still have several weeks before I can walk normally, and even expect to have a bit of a limp for the beginning of September, but I hope to be fully operational for October when we travel to the States for a family visit. Injuries are tough, especially stupid ones, but patience and listening to your body are the way back to health.