State of the Offspring Address - April 2014

I've only spent half of April with my beloved offspring because they have been on spring vacation with their Spanish grandparents down in Extremadura for two weeks. We do talk to Nora every day on the phone, and her ability to switch languages is even more highlighted, I feel, than when we're in the same room and she turns to address a different language speaker. She tells us about her adventures, where they went that day, etc. 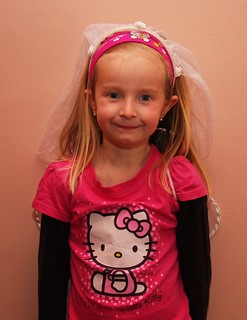 The one thing that made me really glad that Nora is down there was when my wife told me that, during the two days she was down there, too, Nora really enjoyed going out into the fields to participate in the southern Spanish pastime of picking wild asparagus. She told me that Nora was running, nay, frolicking in long grass up to her chest. Those are the kinds of experiences that a life well lived should be full of.

Another exciting milestone was how Nora walked with her grandfather to the store, around the block (no streets to cross), and then, while he was still at the store, walked by herself back home and back to the store a half dozen times. She's really capable of that sort of independence, and we're happy to encourage her. She's very proud of herself for those things. It's pretty terrifying as a parent to decide when your child is capable of crossing a street by herself, as the consequences of a careless wrong move can be so grave, but we think that Nora is almost ready, especially in our small town.

You know how, in cartoon physics, when a character runs off a cliff, but doesn't realize he's done so until he looks down, and only then does he fall? That's about where Ian is with walking. He is completely capable of taking five or six steps by himself without falling over, but he only does it when he forgets that he "needs" someone to help him. When you bend over to help him walk, he refuses to hold two hands, since he wants one free to interact with the world, but he really doesn't want to let go of the last hand. I haven't seen him in a fortnight, so I'm really looking forward to seeing his ambulatory progress. 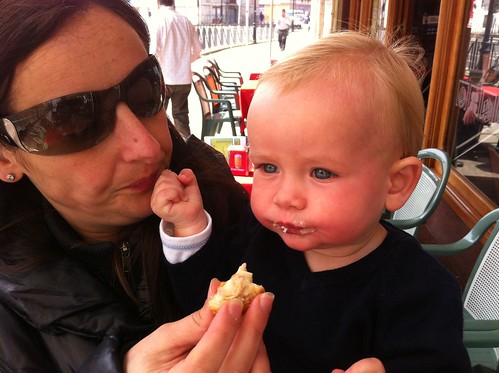 Ian has also started to get some upper incisors, but I don't really know the extent of his dental growth, so you'll have to stay tuned for that in May. He is getting a bit tired of pureed vegetables and his milk bottle, though.

That's really about all I've got for this month, since we've been out of contact so much. Here are some photos and videos I took earlier in the month.

Walking is hard! They look like a pair of drunk friends on their way home from the pub late at night. Ian was okay, by the way.

Bumper cars. Nora often uses a sort of mispronounced Spanish with her brother. She does the same thing in English, sort of a "baby-fication" of the proper words. 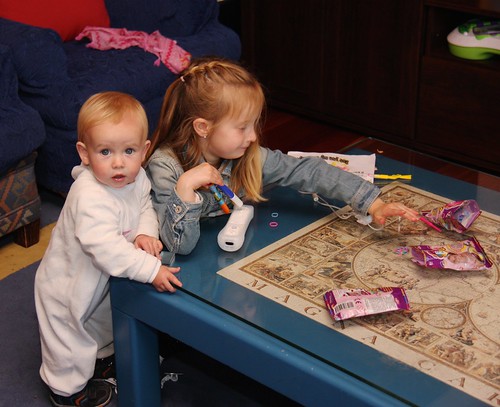 Ian is "helping" Nora make bracelets out of little rubber bands, a huge current fad among her generation. 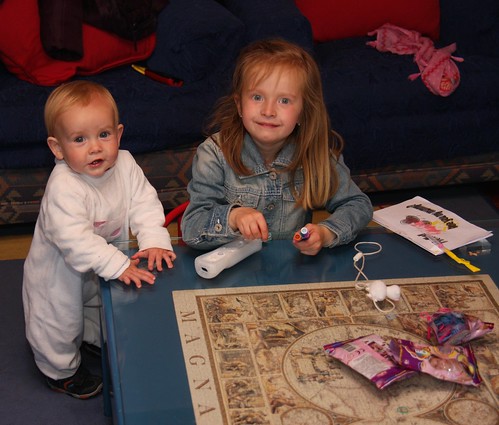 They do look related. 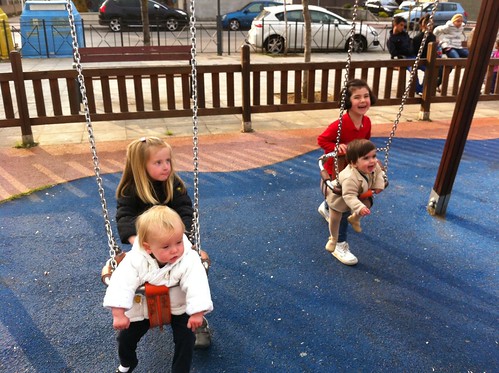 Nora and Ian with Claudia and Mara, both just a month apart in age. 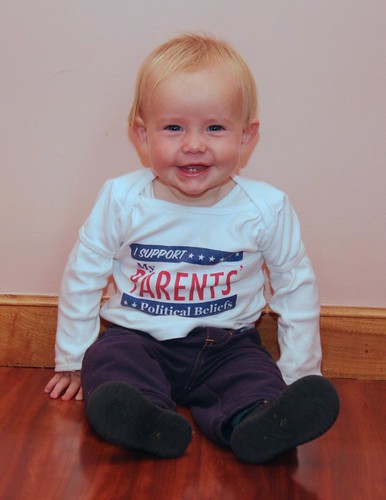 Ian supports his parents' political beliefs. Nora did, too. 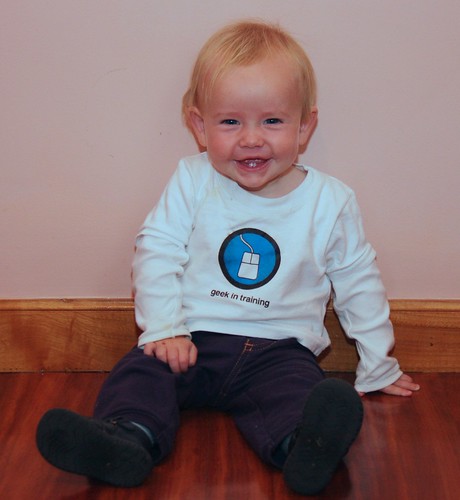