Seven long years ago, I participated in this event and won a trophy. In the years since I have been unable to attend either with travel or childrearing conflicts, but this year, with the kids at their abuelos', I was able to participate again. There was a constant drizzle throughout the whole event; one of the organizers said that it was the second worst weather they've had over the fourteen years, which is pretty amazing considering the Cantabrian spring. Like Easter, the lunar cycle plays a big role in determining the date of the tournament every year, as it has to be in the early morning, finishing before 11am, before many beach goers flock to the beach, and it has to be at low tide. 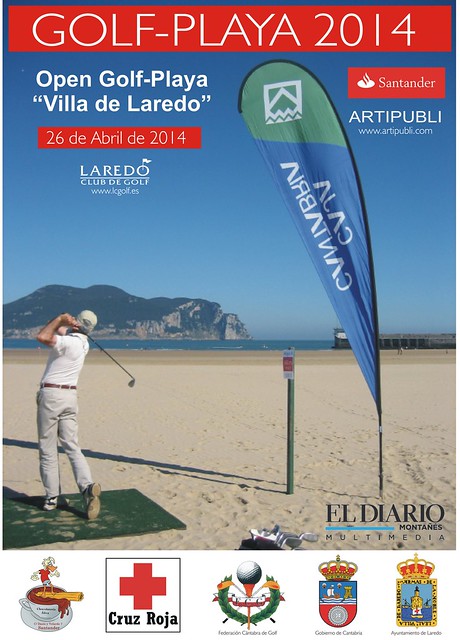 The week before the tournament, Pedro, my friend and the tournament organizer, posted a video on Facebook of some stunt they did at ESPN with a pro golfer putting on glass. When a golf green is really fast (low friction so the ball rolls very far before stopping), we use the simile, "It's like putting on glass." So it was interesting to actually see someone putting on actual glass. I made the casual comment on his video, "I wonder how this compares to the beach at Laredo!"

I never expected anything to come from my comment, but the following day, Pedro posted a video where he had actually measured the speed of a the beach. The way that dimension of green speed is measured is with a special apparatus called a stimpmeter. It's an inclined plane that you raise to a certain angle, controlled by the point that a golf ball gains enough potential energy to roll over a ridge, and then it rolls on the green some distance, and you measure how far it rolled – in feet, because it was invented by Americans. The greens at Augusta National, where they play The Masters, are widely known to have some of the slickest greens in golf, and they usually measure 12 - 13 on the stimpmeter (that's feet that the ball rolled off the inclined plane, so bigger numbers are faster). Pedro's measurement for the beach was 13.6. If you're still curious, check out How to use a stimpmeter.

One of the things that most amazes me about beach golf is just how similar the experience of putting is to that of putting on real grass. I think that, due to the rain, they weren't rolling at 13.6, but they were still pretty quick. Obviously you always know that the ball will break (curve) towards the sea, but there were some tricky breaks left or right when putting directly towards the sea. Luckily, my ball only plugged once on one of the really short holes where my wedge went really high. Then I actually had to use my sand trap knowledge of what to do with a plugged ball in the sand. The rest of the time it was a matter of using putting strokes.

Oops, my foursome allowed ourselves to mark and clean our balls on the green, which even the strictest "grass golf" rules allow. But we did have to shout at another foursome to leave the flag in the hole. That rule is there because if the sand is moist – and it definitely was on Saturday – it's very possible that the act of pulling out the flag can remove the entire hole, which pretty much ruins that hole for everybody behind you. There was a big difference in putting debris from the first hole to the later holes that we played, just from all the footprints. Some of my putts were pretty wobbly. 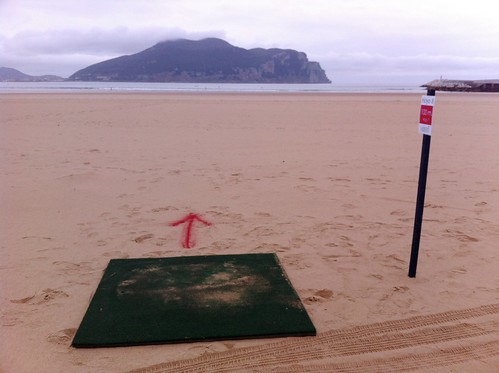 Each tee box was a matt to hit off of with an arrow specifying which hole to aim for. Another aspect of beach golf is that the holes all look much further away than they really are due to a lack of depth perception clues, similar to how the moon looks further away when it's high in the sky compared to low on the horizon. 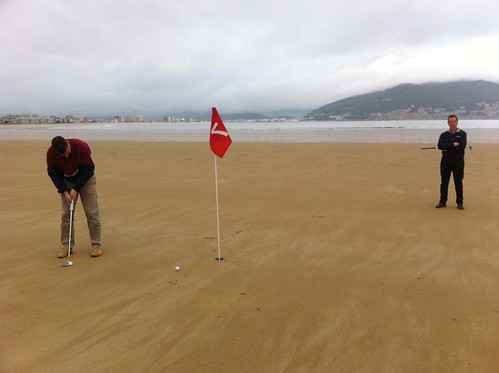 Two of the golfers in my foursome were better golfers than me. 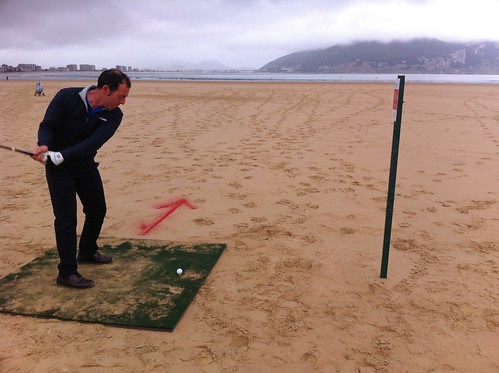 This is Michel, who won the whole event. 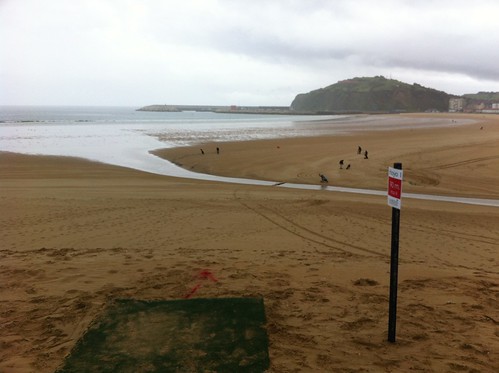 The view from the first tee was spectacular. It was way up high on the highest dune on the beach, hitting down over a little creek that feeds into the sea, bisecting the beach. 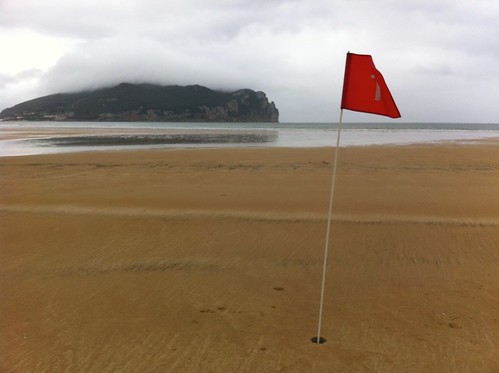 The holes varied in length from 80 meters to 160 meters. I had printed out a little spreadsheet conversion table, because I can only think in yards on the golf course. That's 87 to 175 yards. All par threes, of course. 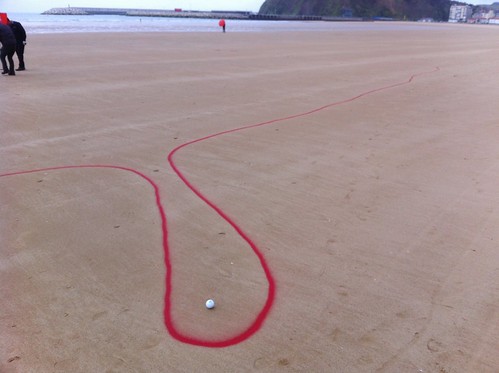 Whoever came out at 6am that morning to measure the holes and draw the greens had a sense of humor. 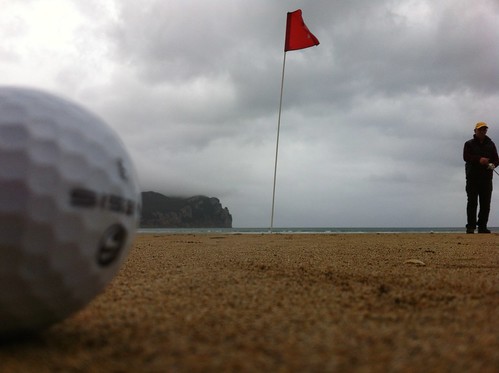 The beach is really nice and flat. 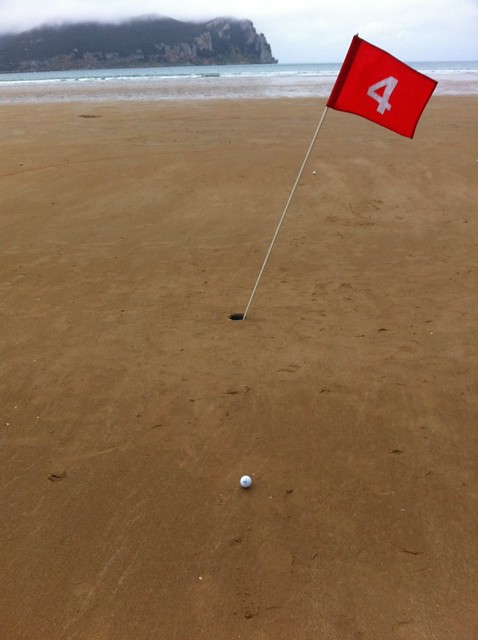 This was my drive on the last hole my foursome played (we started on #5 and there were nine holes in total). I sunk the birdie to register a score of four over par, which was -1 with my 5 handicap. I'm not sure how they determined handicaps. This was the only flag that succumbed to the wind.

The following day, I got a call from Pedro saying that I had tied for first in the "scratch" (no handicap) competition, and that I was fourth in the "under 18 handicap" flight, but due to some technicality, I was due to receive a third place trophy and a coupon for a free round of golf at a nearby course. Yay!

Playing golf on flat hard sand is very interesting. It's an amazingly close facsimile to real grass, and it's an interesting genre of "novelty golf" that manages to capture most of the challenge and dopamine thrill of real golf. I hope I can play in this tournament more often.