State of the Offspring Address - March 2014

This March has been a pretty big month for the offspring, not quite as big as the one five years ago, but pretty huge. Nora turned five years old! It still sounds amazing when I say it. She's been with us for five years, the majority of the time we've been living in Spain. Crazy!

Ian has hit some milestones, too, as he completed his eleventh month. He can now pull himself up to standing on the coffee table and take one or two tentative steps between outstretched adult arms. He's found that he loves little pieces of bread, and can usually entertain himself in his high chair while the fully teethed members of the family eat by grabbing and eating little bits of bread we break off for him.

Last night I let him suck on a pen for a minute while I read an email. Oops... 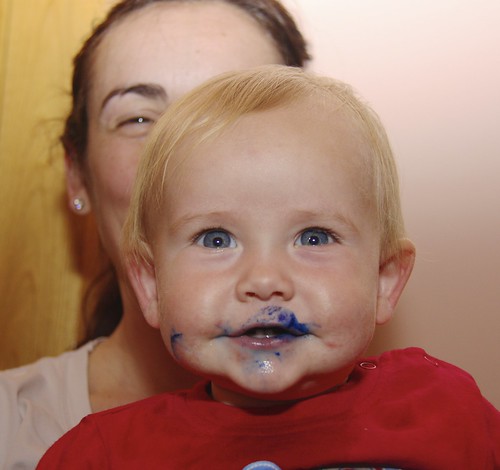 When Nora was a baby, she was absolutely terrible in the car. If you've never had a child that hates riding in the car, it might be hard to comprehend, but we would often decide that it was just not worth it to go five minutes to the neighboring town because the car ride would make us all so miserable. Ian, on the other hand, is orders of magnitude better in the car, usually falling asleep or playing quietly. As a result, we've decided that we need to do more family excursions on the weekends. This month we went on three, the first was up to the Nacimiento del Asón, the place where the river that runs into the ocean where we live is "born", springing forth from the high rocky cliffs. 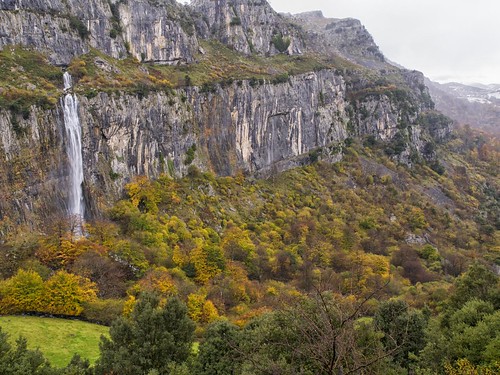 The photo is not mine. Since this was our rookie attempt at a daily outing, I left my good camera at home. 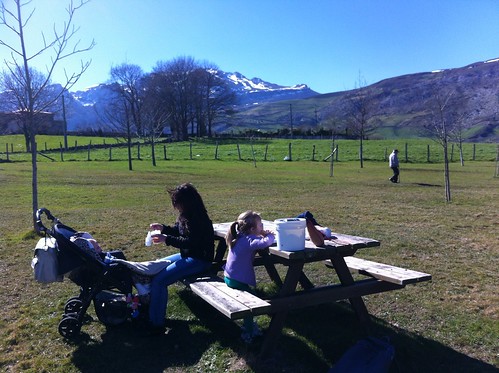 We did have a lovely picnic up on the mountain, though, beneath snowy peaks.

Our second outing was to Bilbao, which I've already written about, and our third was just yesterday to a nearby picnic site by the River Asón near Ramales de la Victoria, where we had a lovely walk, got to pet some baby goats, and had a fun picnic by the river. We took Nora's little scooter to let her use on the walk, but she quickly tired of it. We've yet to find anything remotely athletic that she enjoys doing. Even if she had perfect balance and riding a scooter or bicycle well didn't require any practice, I think she'd still be uninterested. 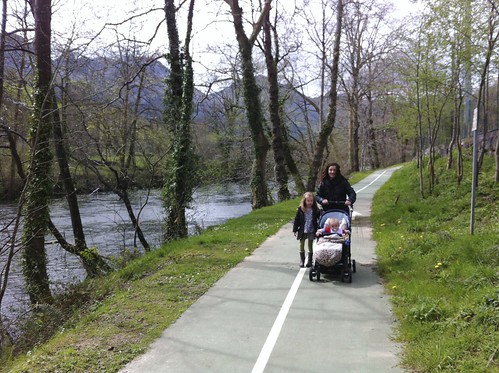 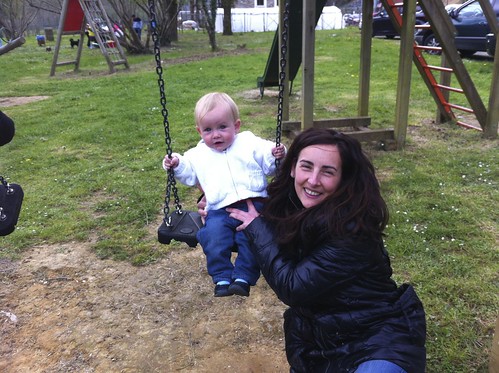 We've discovered that we're all a lot happier when we're out together. It's a lot easier to give your kids your undivided attention when there's not housework that you could be doing or the temptation to let one parent nap.

We look forward to many more family excursions in the future, as we explore the area around where we've been living for nine years. 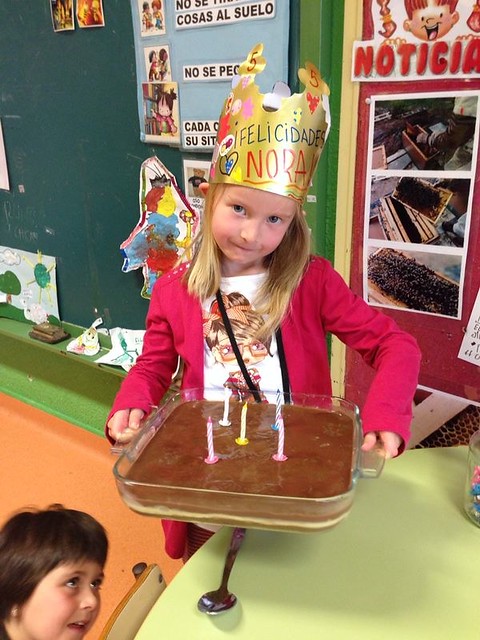 Nora had a great time hosting her birthday party at school.

One day this month I took the offspring to a common play room full of kids they don't know. It literally looked like it was populated by two different species. The girls were quietly thumbing through books or drawing on a chalkboard, and the boys were bashing each other over the head with cushions. Noraï»¿ headed straight for the chalkboard, and Ianï»¿, pulling me in tow for ambulatory assistance, made a beeline for the corner of the room where the wrestling was going on. To the boys' credit, not only did they ignore the girls and not bother them, but when Ian arrived, they calmed down and played peek-a-boo with him. Eventually one of them handed him a little toy Ferrari, and Ian stood up and ran through the various doll makeover activities over to a corner where he could zoom the car along the ground between attempts to swallow it whole.

I've done my best (short of telling beloved family members where to shove that pink crap) to raise my kids as gender neutral as possible, and Ian's never had a masculine toy (a hammer or truck) at home, but it's startling how stereotypical they are in their gender identities. If it's spherical or got wheels, Ian's interested, and if it's pink or related to babies, fashion, makeup or housework, Nora's intrigued. They are both, at the moment, more masculine and feminine than their respective parents.

That's What They Said

Some verbal exchanges we had this month.

One day, I saw some bizarre news footage on TV (I can't remember what), and I said, "What the heck!?" Nora, added, very seriously, "Yes, what is that heck?"

One day Nora asked, "Why do grown ups not use pretty band-aids like kids do?" Excellent question, that.

I instructed Nora to go draw a picture of "a house and a rainbow". The latter instruction got dropped, but what I got was a tree with a beehive, inside the house was a bee asking a bear (I was asked to draw the outline of the bear) if he wanted some honey. She signed it at the top left, and got one word into the sentence "Claudia didn't do this" (I was asked to complete it), ensuring that her best friend, whom we haven't seen for four days due to vacations, would not be taking any credit for this masterpiece...a technique Dalí­ used, I think, regularly scrawling "Picasso didn't do this!" on his works. 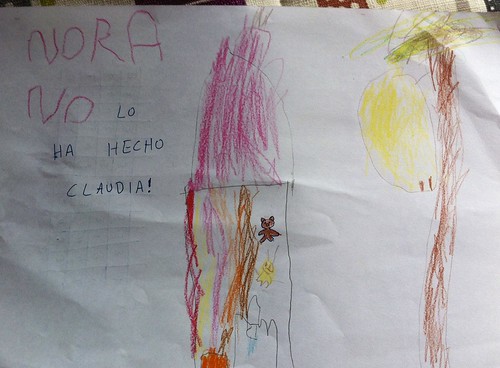 Some photos from Nora's birthday and Ian's 11-month birthday... 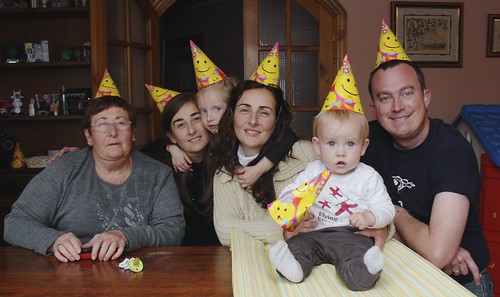 Abuela, Tí­a Belén, and us. 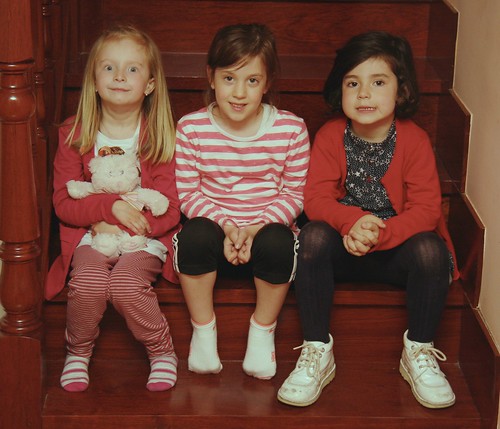 Nora had her two best friends over for her birthday, Carmen and Claudia (the one who didn't draw the artwork above). 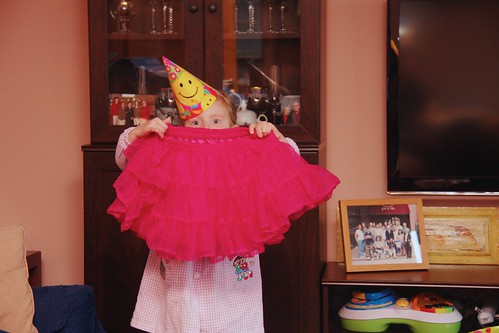 Pink mustache, or excited about a miniskirt?

Every year, for the Cultural Week, Nora's school decorates around a theme. To be honest, almost all the work is done by Nora's teacher and her husband. The kids and parents are encouraged to go help out, but the only ones that go are from Nora's class (despite there being many more classes). Nora loves to go during these times because she and maybe one or two other kids has their teacher all to themselves and they can help out (but mostly just follow her around) as she goes about organizing the decorations. We took Ian for a little bit, and he got a lot of one-on-one time with the teachers and other helpers. 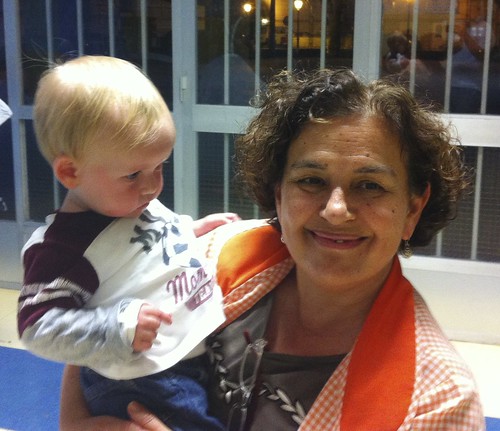 Nora's teacher, Viky, with Ian. She said she'd been wanting to hold him for months, but restrains herself from doting too much over her students' siblings to not cause favoritism envy. 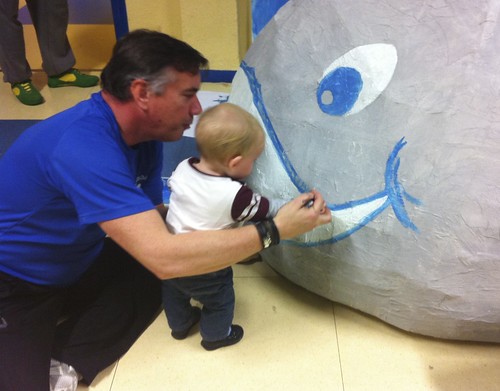 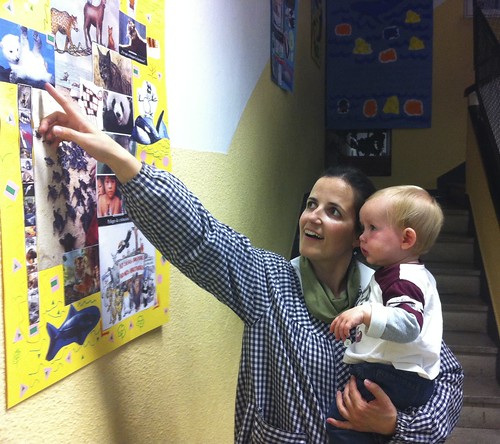 This is Ian with his future preschool teacher, Carmen. They're on a three-year cycle, where each teacher stays with a class for three years, and this year Carmen's got the youngest kids, so in three years, when Ian enters preschool, she will again. I look forward to showing this photo to them in the future. 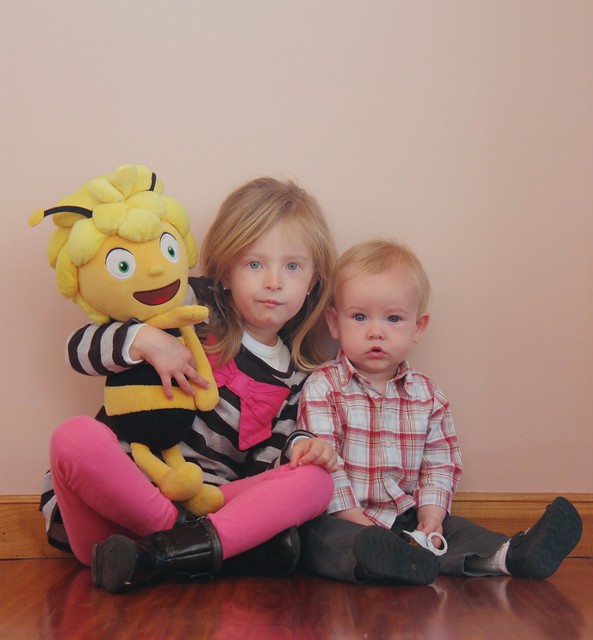