The Guggenheim in Bilbao

I'm a little embarrassed to admit that it's only as we're rounding out our ninth year living in eastern Cantabria that we have actually entered Frank Gehry's incredibly unique building that tops all guidebooks to the lovely Basque city of Bilbao. But we did it; with two kids in tow nonetheless!

As a child, Nora was completely miserable to travel with in the car, so we became very town-bound. Ian is considerably better at riding in the car, so we've decided that we need to start doing more things on the weekends as a foursome family unit. As we're still new at this, it took us a while to get out the door, and we arrived in Bilbao at around 1 pm, with plenty of time for a walk before looking for lunch. We lucked into a sweet parking spot less than 200 meters from the Guggenheim museum itself.

After a brief walk along the river, we headed into town, but quickly got lost meandering around the commercial streets full of closed shops (it was Sunday). Friend of the blog, Bawa, had suggested we find a place named El Globo (this is the state of web design in Spain), but there was a huge bicycle race taking place on the street adjacent to where she said, so the area was overrun with spandex-clad people. Not to mention, the place that Google said it was didn't seem to have a bar with that name. Soon we were getting desperate to feed Ian, so we chose the first place we found, a little bar called Planchaditos, which served up some pretty mediocre pintxos (tapas, in Basque), but they heated up Ian's puré. 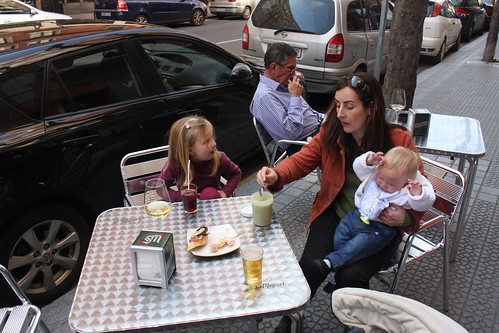 As you can see here from the look of exasperation on mother and son, Ian wanted nothing to do with his puré, so he got to skip right to the yogurt course. 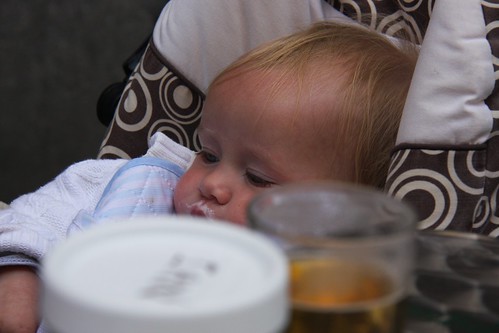 This was more acceptable to him. 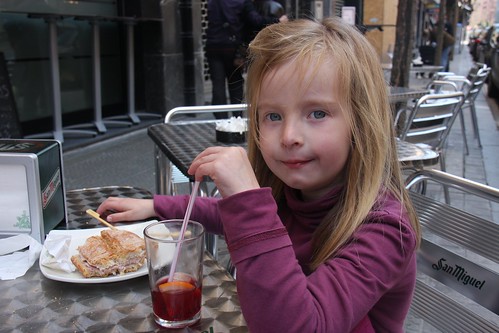 Nora enjoyed her mosto (grape juice), and I – when in Rome... – had a Txakoli, a Basque white wine.

After Ian was fed, we finally found a little nook that was packed with Bilbainos enjoying pintxos and wine, Calle Maestro Garcia Rivera. There was not a tourist in sight; they were all locals. 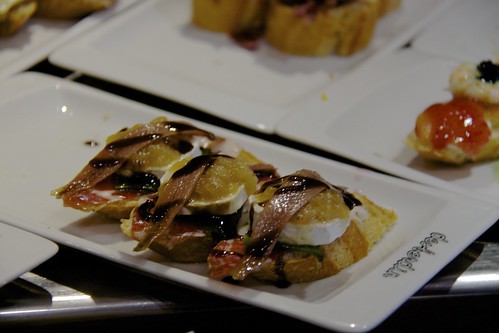 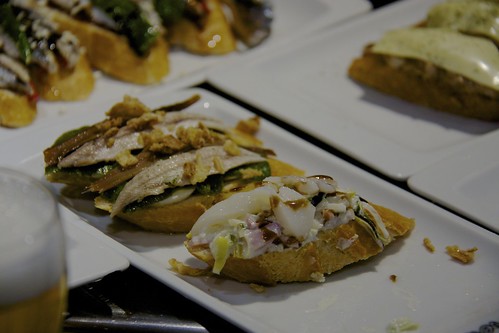 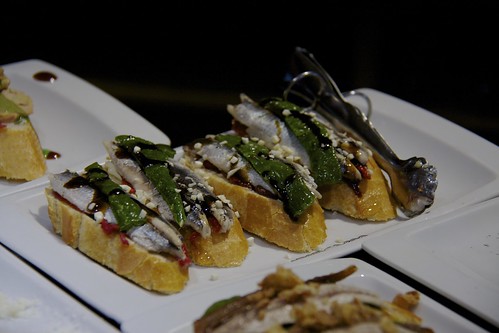 I could've stayed for another hour sipping Basque wine and eating pintxos, but Nora was getting bored, so we headed towards the museum we came to see.

It was 13€ per adult to enter, with the kids being free. One of the reasons we'd been drawn at this particular time was an exhibition by the most famous person whose name is 57% the letter "O", none other than the Beatles breaker herself, Yoko Ono. Her exhibition was on the third floor, but first we explored the first floor. The most prominent display on the first floor was the only one I'd heard about at the Guggenheim, which was Richard Serra's A Matter of Time, a series of enormous steel spirals that you could walk through. It was a good introduction to "modern art" and how much sense it makes.

The works definitely evoked an emotion (which is the goal of artists, I think), and the emotion was a sense of suspense and intrigue as you walked deeper and deeper into the spirals, only to have a tremendous letdown upon arriving to the stark nothingness at the center. I was amused that when I attempted to vocalize my frustration at the anticlimax, my brain came up with the sentence, "They should have some sort of cheese platter here in the middle.", unconsciously evoking the rat maze nature of the work.

Ian never, ever, ever wants to sit or lie down, always preferring to stand or walk (with assistance) whenever he can. So imagine our confusion when, upon being set on the ground to walk around inside one of these spirals, he immediately sat down and then laid down on his back. We assumed he must be onto something. 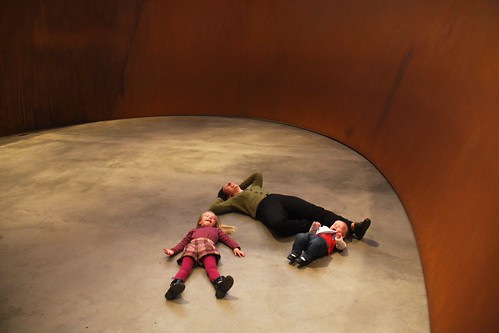 Perhaps this is the way the piece is meant to be enjoyed? 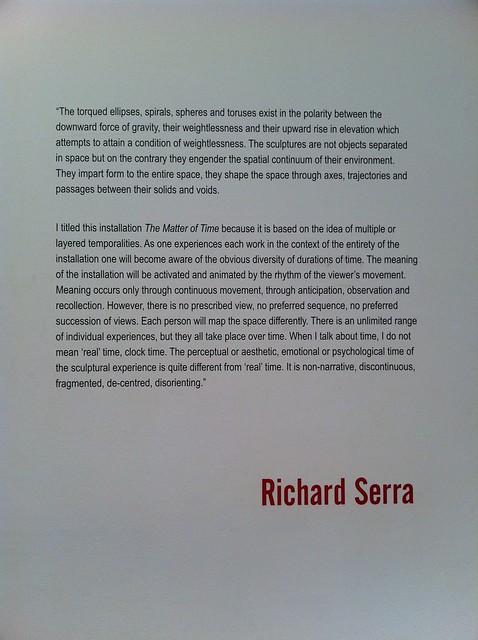 The torqued ellipses, spirals, spheres and toruses exist in the polarity between the downward force of gravity, their weightlessness and their upward rise in elevation which attempts to attain a condition of weightlessness. The sculptures are not objects separated in space but on the contrary they engender the spacial continuum of their environment. They impart form to the entire space, they shape the space through axes, trajectories and passages between their solids and voids.

I titled this installation The Matter of Time because it is based on the idea of multiple or layered temporalities. As one experiences each work in the context of the entirety of the installation one will become aware of the obvious diversity of durations of time. The meaning of the installation will be activated and animated by the rhythm of the viewer's movement. Meaning occurs only through continuous movement, through anticipation, observation and recollection. However, there is no prescribed view, no preferred sequence, no preferred succession of views. Each person will map the space differently. There is an unlimited range of individual experiences, but they all take place over time. When I talk about time, I do not mean 'real' time, clock time. The perceptual or aesthetic, emotional or psychological time of the sculptural experience is quite different from 'real' time. It is non-narrative, discontinuous, fragmented, de-centred, disorienting.

Total. Absolute. Bollocks. This is the kind of shit that makes me despise modern art. I mean, who's to say that these gigantic steel mazes even exist, man, on, like, the contours of my consciousness, man! 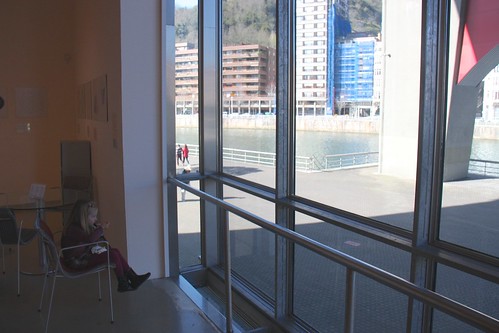 Nora, probably bored, got pretty insistent that it was time for her to have a yogurt, so we let her eat it here (once we decided the chairs weren't an exhibition piece) with this beautiful view of the Nervion River. 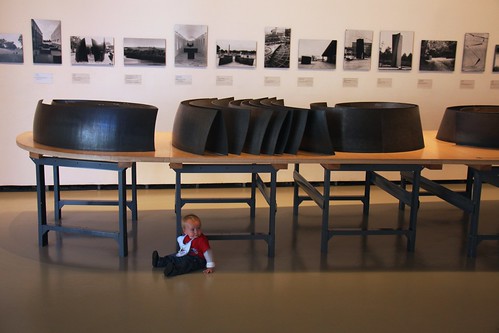 Ian was not impressed with the scale model of Serra's giant spiral things.

Oh, speaking of bollocks, here's the main lobby of the museum, announcing its contents loud and clear. 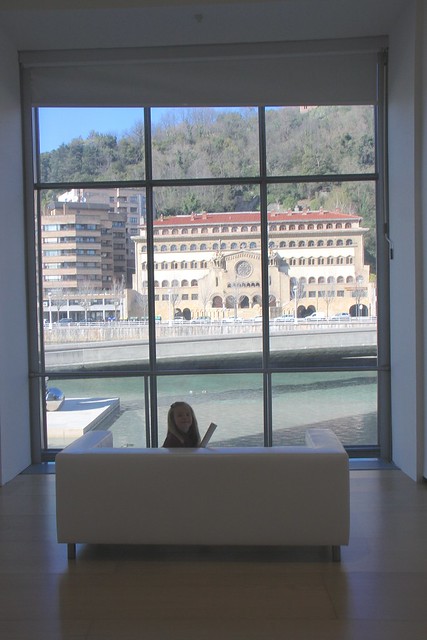 Another gorgeous window that Nora found to sit in front of.

So, it was in this "WTF?" mindset that we took the elevator up to the third floor to see the work of known "avant garde" nutcase Yoko-freakin'-Ono... 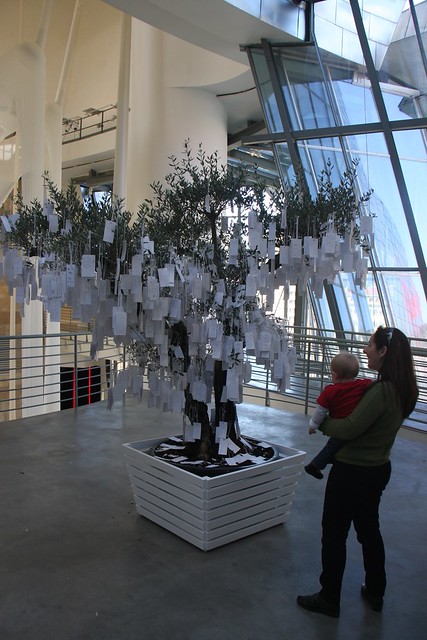 The very first piece of the Yoko exhibit was the coolest of them all. It was a "Wish Tree" where visitors were encouraged to write a little wish and place it on the tree. Some of them wished for silly things like their favorite sports team to win or for World Peace, but others actually had wishes for sick loved ones to get well. We left a card that Nora filled out that said "NORAIAN" on it. 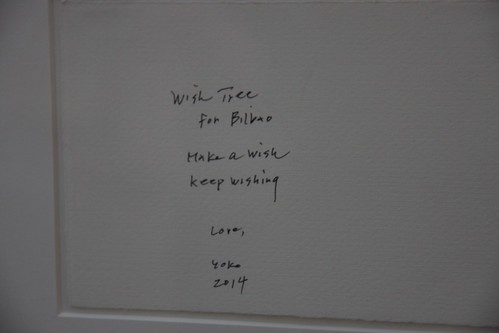 The security guards were extremely vigilant to stop camera usage inside the Yoko exhibit, but it lived up to my WTF expectations of modern art, with piles of trash cordoned off on the floor, etc. Two disturbingly memorial items were videos on repeat, one of a housefly on a woman's (Yoko's?) lips, and then on her nipples, just sitting there scratching its legs together, doing what flies do. The second was a video of closeups of human buttocks, just two cheeks filling the screen. Umm...? 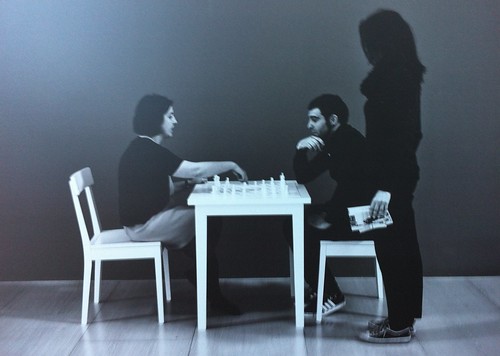 By far the most thought-provoking thing inside the Yoko exhibit was one of the only items labeled "Participate!" – another one was a set of gumball vending machines selling "little capsules of air" for 0.50€ each...ugh! – this chessboard where all the squares and all the pieces were white. I took a photo of the photograph out in the hall. The teenagers playing at the actual table in the exhibition could only get three or four moves into the game before confusion set in. I thought it was a pretty clever way to raise the "Imagine there's countries" way of looking at the ridiculousness of war.

After exhausting first our interest, and then the content of the exhibition, of Yoko's work, we were ready to head down to the second floor to see the strange crocheted work of a Brazilian artist named Ernesto Neto. Now that I think about it, both Yoko and Ernesto's surnames are perfect for them. The Brazilian made some pretty crazy stuff out of netting. 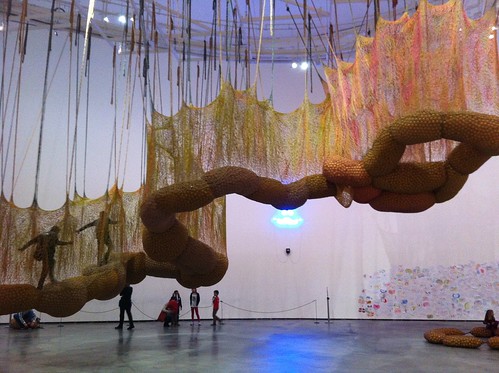 Without a doubt, the coolest thing in the whole museum and the coolest thing I did this week was this suspended net full of rubber balls. My wife assumed they represented intestines, but the audio recording said it was a sperm and egg. Whatever. Either way, if you were over 13 years of age, you could climb up into the thing and walk around. It was awesome! The audio recording described it very well in saying that it juxtaposed a real sense of comfort of soft rubber balls underfoot with one of discomfort of suspension at great height and the generally wobbliness that went along with that. It was very cool. 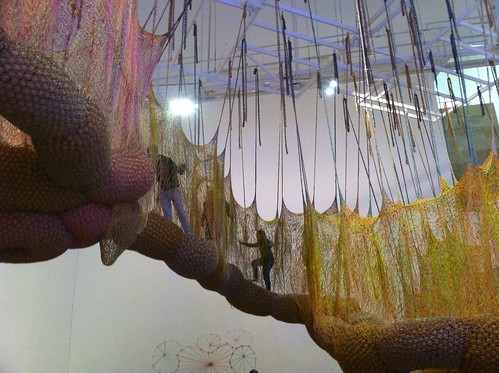 That's Marga making the climb. The netting along the sides could not have been easier to hold onto, making falling down an impossibility. Very cleverly, they had some little sausage links of the netted balls on the floor for kids under thirteen to play on. Nora had a good time on them until some other rougher kids came along and she lost interest.

Then we went to a section where Neto had made a sort of shag carpet of different colors. Part of it was marked with "You can take your shoes off and run around here", and no one was doing so, so Nora enjoyed running around on the soft stuff. When it was time to go, we were on our way out, and there was a "piece of art" that was basically a big spill of gray dust. Nora, having just been encouraged by the museum to interact with stuff, went over and touched it, smearing her finger marks in the dust. I tried to stop her, shouting "No!" a little too loudly, but I was only in time to scare the crap out of my poor daughter. The security lady, who had previous encouraged Nora to put her hand through a piece of netting on another exhibit, came over and said, "The rule is that children must be holding hands with adults at all times!" as two children ran by. Meh! I bet they rake that dust every morning like sand traps on a golf course.

On that sour note, we left the museum to walk around a bit, grab and ice cream and head home. 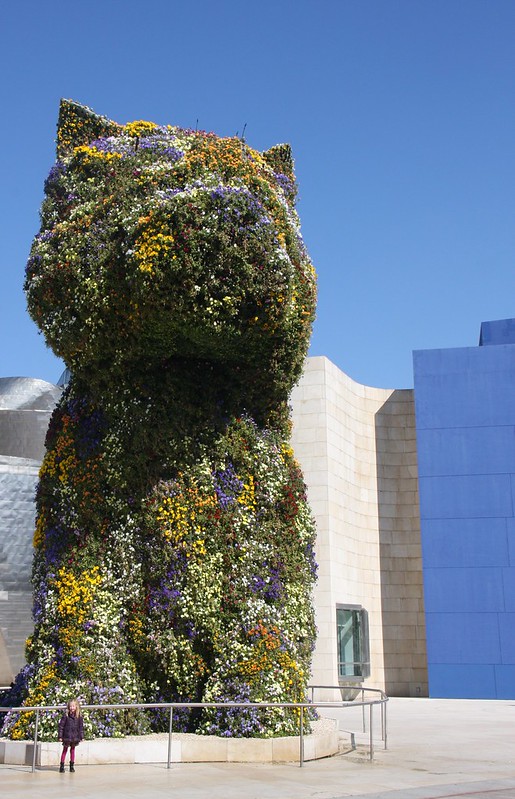 Overall it was a pretty enjoyable day. In retrospect it's pretty funny that we were considering whether or not we'd want to visit the Guggenheim at least three times a year to justify the yearlong pass. I'm pretty sure that, unless some extremely compelling exhibition comes there, we won't be going back. The building and architecture is absolutely stunning, but the pretentiousness of modern art is a little too much to stomach.