Paul Rasmussen's Hole In One

Something truly special happened during my annual February golf trip to Myrtle Beach, South Carolina, this year. Normally we have pretty good luck with the weather, but this year we had some fairly heavy rain on Saturday, February 8, 2014. We were playing one of the nicest courses we've ever played, over the decade we've been going there, TPC Myrtle Beach. Fortunately, most of us have pretty decent rain gear: water proof pants, jacket, shoes and gloves that both keep your hands warm and also somehow don't slip on the club grip. Golfing in the rain is considerably less fun than golfing in the sunshine, but, if you have the right attitude and equipment, it still beats most activities. It rained pretty steadily for the entire front nine, and began clearing up on the back. I was playing with my father, Paul, and our friend Dennis. Some of the less avid golfers in our group gave up after only a few holes, so our friend Jeff, who had been in a threesome behind us, joined up with us to make a foursome for the back nine. By the time we got to the seventeenth hole, most of us had taken off our outer waterproof layer of clothes. 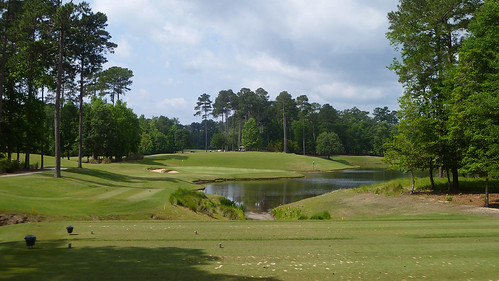 The 17th is the signature hole on this Tom Fazio course. We were playing from the white tees, making it a 138 yard par 3, with a water carry. 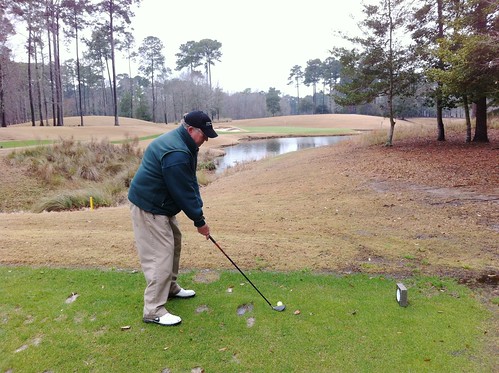 Paul teed up his ball and hit his hybrid 4-iron. 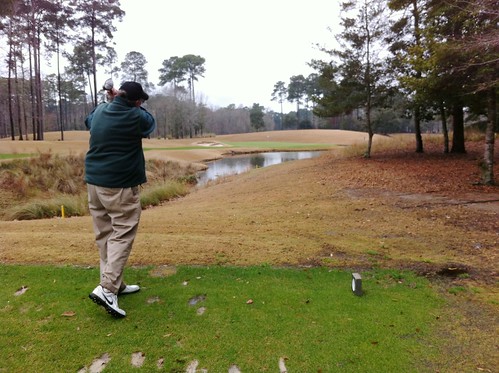 The ball took off with a beautiful trajectory towards the green, headed just left of the flag. It landed on the front of the green and rolled towards the pin, following the contour of the green, which was bending it back to the right, towards the hole. As it slowed by the flag stick, the tension grew on the tee, "It's going right for it!" someone commented, excitedly. And then, just as the ball was slowing to a stop...

Jeff, Dennis and I let out an enormous roar, which our friends five holes away told us was heard throughout the golf course. Hugs were shared, before we got in the carts and drove up to the green. 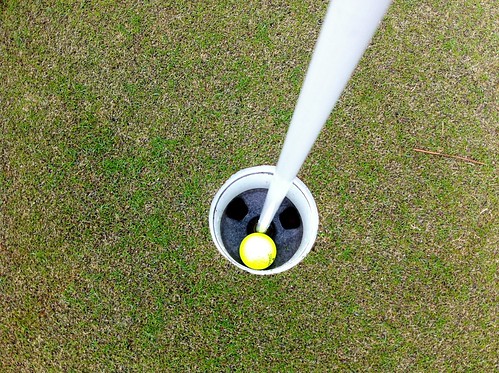 The most beautiful image to a golfer is a ball in the hole with the pin still in, because it means that you hit it in from off the green. You should always take the ball out with your hand before removing the pin, because the rules of golf state that if you pull out the pin and the removal of the pin pops the ball out of the hole, the ball doesn't count as being in the hole. 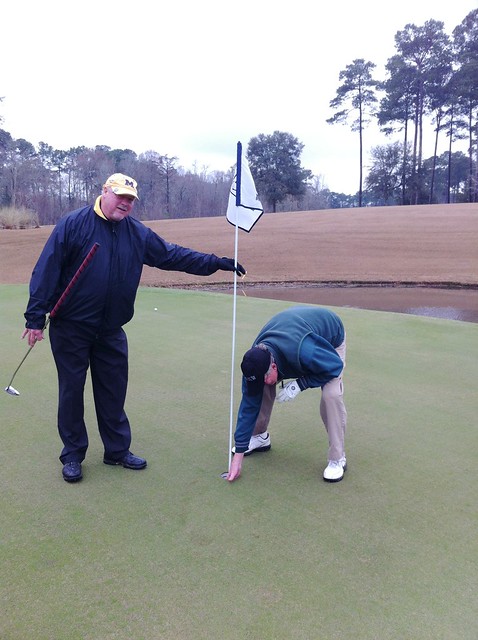 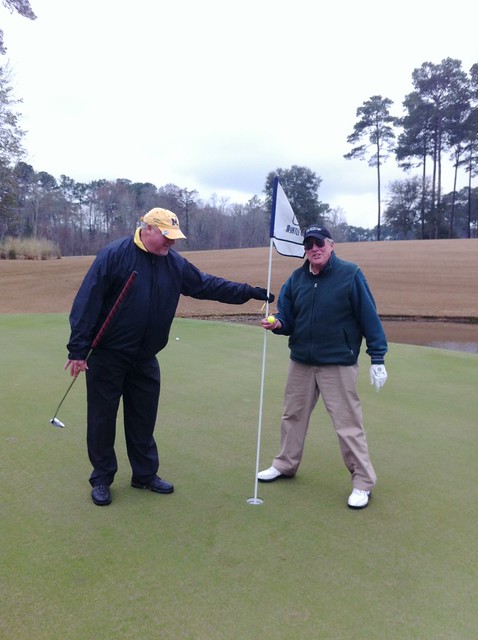 Watching a hole-in-one is a very special experience, because they are so incredibly rare. It's even more special when you can see the ball disappear; many times you don't have a clear view of the hole to see it fall in. One of the myriad things I love about the game is that, unlike in many other sports, every once in a while an amateur can perform a feat that is better than the most hardened tour pro. Tiger Woods could hit that 138-yard shot a hundred times and never knock the ball in the hole...

But my dad did.