My wife and I are some of the worst home decorators I know. Not only do we lack vision and style ("What would look good in this space?"), but we're stingy as hell. Also, due to our expatriate past/present, we feel very comfortable with the idea of packing up and moving very far away. Which is funny since we've lived in our current house for 8.5 years, longer than we've lived anywhere but with our parents. Our false sense of "We could move out at any moment!" makes us terribly unwilling to actually nest in our current home, and make it better. It's been three and a half years since we bought our current television, and since then we've been suffering with the old table, that came with our old giant CRT television, as our sole item of "around the television" furniture. We'd been shopping for living room "entertainment center" furniture for about three years, but nothing had really jumped out at us. Most of the suites we saw were in the 700€ - 1300€ range. The influx of Made In China plastic toys this Christmas finally pushed us over the brink.

On Saturday, January 4, the day my in-laws were due to return the kids back to us after having them for 2.5 weeks (we visited frequently!), my wife and I set out for IKEA. We were shopping for several potential needs, but first on the list was somewhere to hide all these toys. We went through every living room exhibit they had. Those Swedes are geniuses at selling furniture. Everything is perfectly lit without a cable (to any of the lights) in sight. The whole experience makes me feel bad about my home decor.

I've long been a fan of the Bestí¥ line, which measures 74cm tall, and our television just happens to be 75cm off the floor. But they're pretty expensive. A fully loaded model with drawers and stuff came out to almost 400€, just for the under-tv furniture. I'd be fine with plunking down a grand to get a sweet setup, but my wife reasons that for that money, why not go 1300€ and get actual quality (not flatpack "el cheapo") furniture? I'm far from a marital expert, but I've learned it's important not to act unilaterally, especially since my wife is almost always right.

In the downtime between serious consideration of products, I enjoyed doing some people watching. IKEA is full of four kinds of couples: young smiling, hand-holding couples looking to furnish their first abode, pregnant couples high on nesting hormones, couples arguing furiously about why X is a stupid idea for the Y room, and even older couples just browsing aimlessly for accessories to their already furnished home.

Another IKEA observation I have every time I go is this: IKEA could do some really amazing things with smart phones. Rather than giving out pencils and paper to write down product numbers, every item could have a QR code, which could be scanned and even played with in 3D on a smart phone. They could then use GPS to point you to where each item is in the warehouse. The whole experience could be streamlined even further than it already is with some smart tech. Anyway...back to the narrative...

Just as we were about to give up, we came across an unpresuming setup in a dirty white paint that had a vague nautical "beach house" feel to it. It was dirt cheap. 79€ for the under-tv table, with two drawers included. We ventured back through the Swedish labyrinth until we found the same model, the Borgsí¶, in brown. We were intrigued. At that point, however, we got a call that, due to a forecast of high winds, my in-laws were bringing the kids early and didn't have keys to our house, we we had to rush home to let them in.

Later that afternoon, I convinced my wife to pull the trigger on the purchase. We got the under-tv table, and two matching bookcases, with opaque doors on the bottom and glass doors on the top, all for under 300€, way below any halfway-comparable furniture suite we'd seen before. We spent Sunday and Monday, which was Kings Day, or the Epiphany, the primary present giving day in the Spanish Christmas, building the furniture and organizing the house around it. 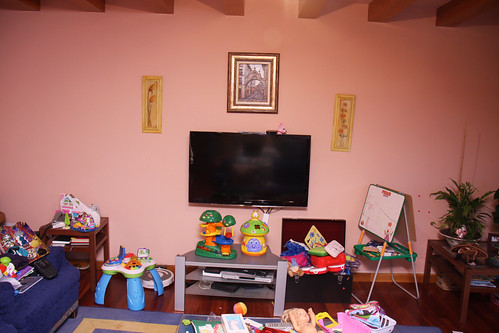 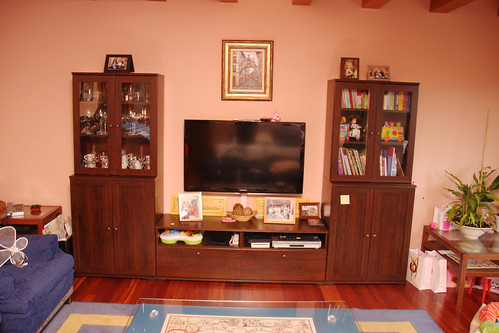 The shelves behind the doors at the bottom are chock full of toys.

The doors were backordered, so I went to get them today. Nora "helped" me install them. It turns out even a four year old can pretty reasonably read, if not act on, IKEA instruction manuals. She insisted that, when Mommy came home, she'd be curious about who made the furniture so pretty, so we'd better leave a note (seen there on the right bookcase door). 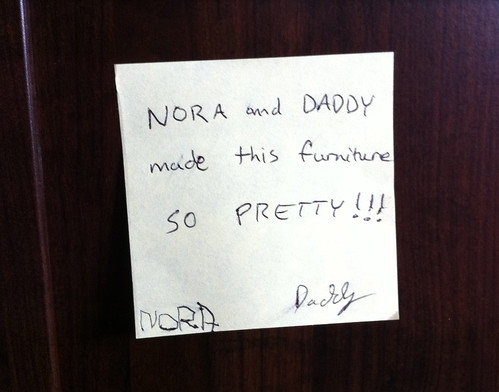 We're quite happy with our purchase.