State of the Offspring Address - December 2013

As we have in past years, we decided to leave the offspring with their maternal grandparents for the last week and a half of the calendar year. I used to think it was pretty liberating with just one kid, but with two, it's exhilaratingly so. All this free time to do whatever we want. Of course my wife and I are pretty career oriented, so we've mostly just been working extra hours, but it's the choice to be able to do so that it's amazing. We began the month in the States visiting my parents, so here are a few cute photos with them. 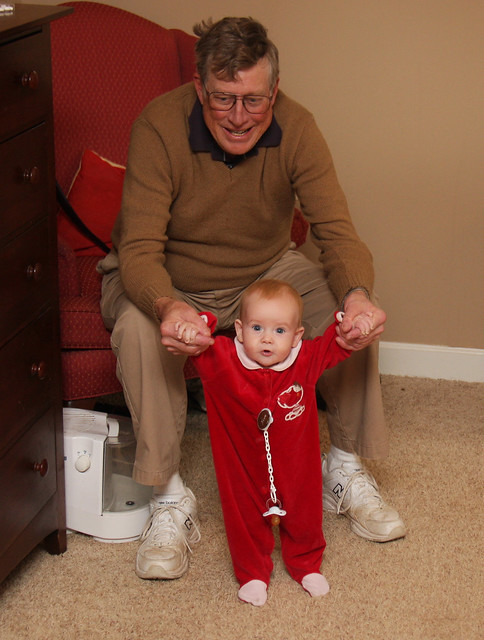 Unlike my father's cowlick, Ian still can't stand up on his own. 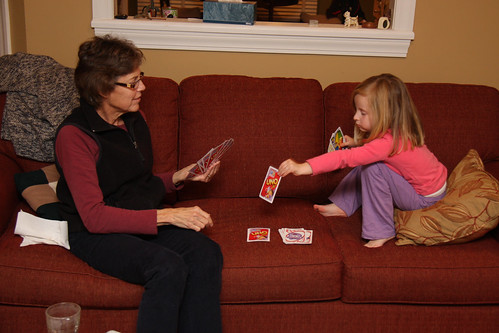 Many, many games of Uno were played between Nora and her grandmother. This warms my heart because some of my warmest childhood memories are of playing games with my grandmother. 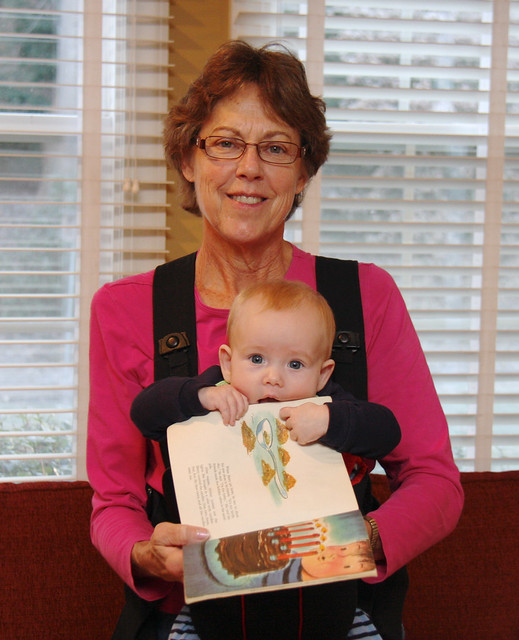 The biggest developmental news of December was that Ian got his first two teeth! Lower incisors, to be exact, and he'll gladly demonstrate just how sharp they are if you get your hand too close. He's spent most of the month exploring his lower gums with his tongue, trying to figure out what those sharp things are. 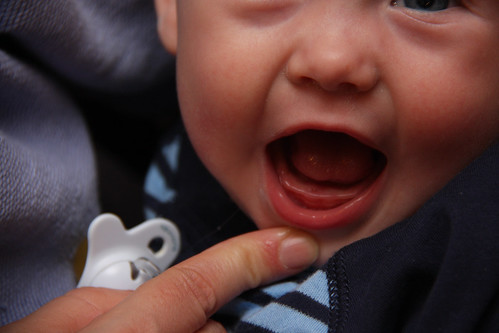 No teeth in November. 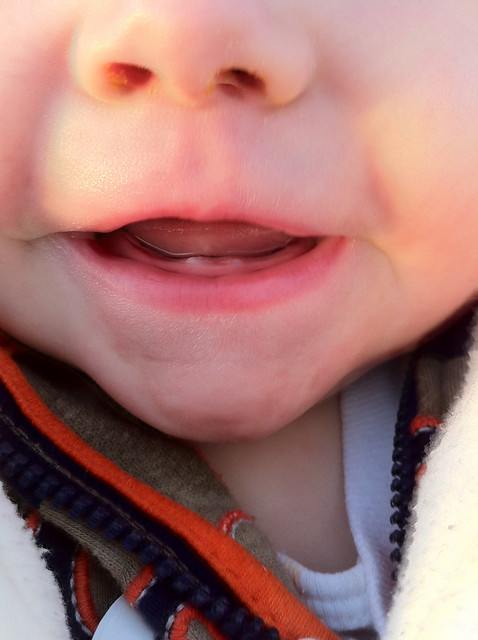 Nora's school did their annual Christmas performance thing. Since she's a preschool sophomore, her class this year are "bears" (last year was "turtles" and next year is "elephants), and the theme chosen for the festival of performances was Music From Around The World. Nora's class was split into two groups. Half of them were "panda caretakers", and the other half were "polar bear caretakers". The former dressed up like the vets they've seen in the YouTube videos of baby pandas being born in captivity, and the latter dressed up as Inuits. Here is Nora's group. She's the fifth from the left, in case you couldn't tell.

In my wife's hometown of Mondragón, they celebrate Saint Thomas' Day in December and it's customary for people, especially kids, to dress up in traditional pastoral garb. 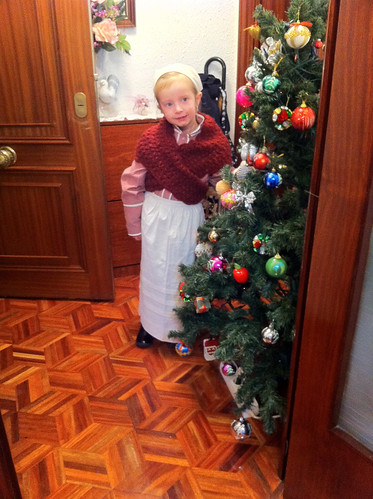 By the Christmas tree. 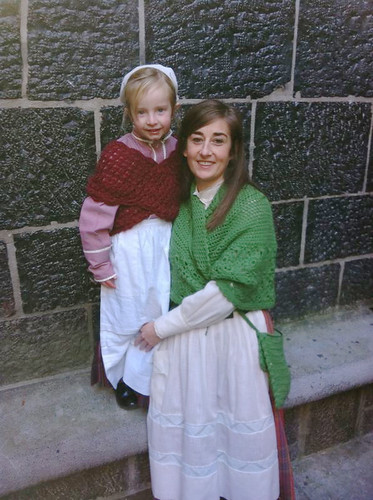 In the Basque Country, presents on Christmas morning are said to be brought by the Olentzero, a mythic coal mining charcoal-making figure pretty equivalent to Santa Claus. The primary difference is that all the presents come from the Olentzero. There is no attribution given to the giver at all. It's the same in the rest of Spain for the Kings who come in January. I'm not sure which way the causality flows, but it makes sense that saying "thank you" is much less common in Spain than in America. It makes the myths way harder to believe, since children cannot help but observe their parents doing Christmas shopping. 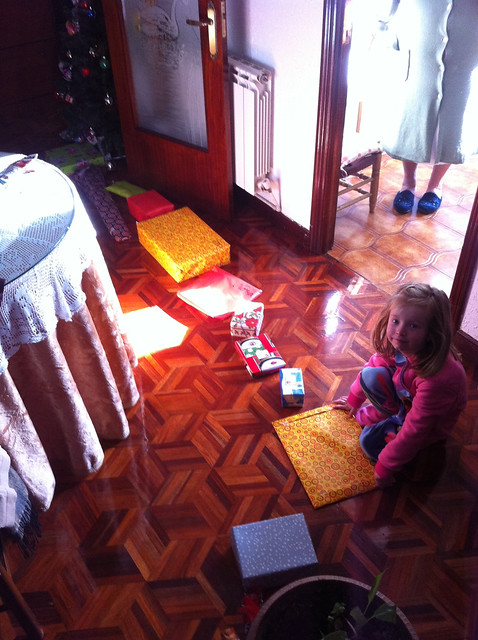 Luckily, it's a small flat. Let the unwrapping frenzy begin! 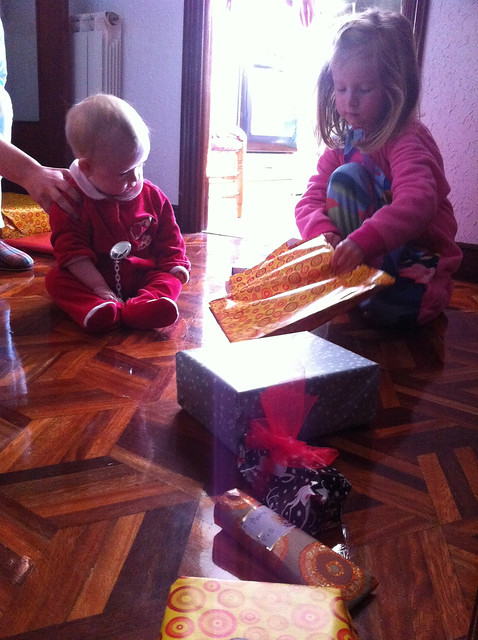 I'm guessing this is the last year that Ian will let his sister open his presents for him. 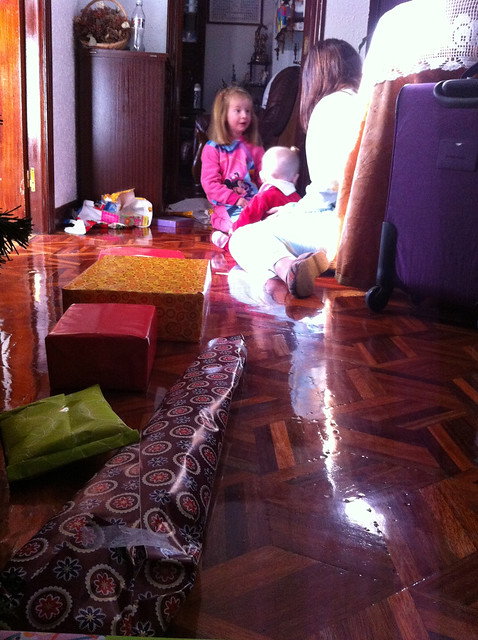 Nora amazed me on Christmas morning with the following observation. "I wonder how the Olentzero knew how much I liked this toy we saw in the toy store in America?" "I don't know, that's amazing," her mother responded. After that, we had to go around to all the aunts' and uncles' houses to find the presents that the Olentzero had inexplicably left for Nora at their house (or in their car, in one instance). For their trouble, the aunts and uncles received no kisses or thank yous, despite my best efforts.

Ian had been going to bed around 9:00 PM most nights, but on New Years Eve, he sensed that it was a night for partying and he stayed up, relatively contentedly until 2014. My wife had the idea that it might be fun to make the celebration a bit more festive with balloons, so during my post-meal-pre-champagne walk with Ian at 10:45 PM (I've never seen the streets so empty, at any time of the day or night!), I stopped by the only open store, los chinos, and bought some. They turned out to be a huge hit to fill the time until the champagne and grapes. 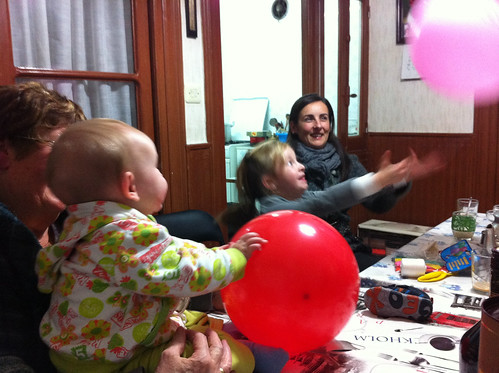 Ian cannot get enough of his sister. Whatever she does is the best thing he's ever seen. 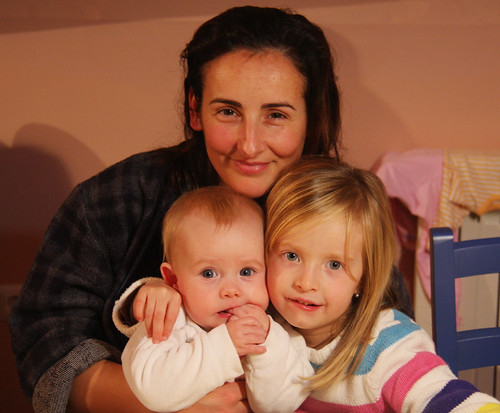