State of the Offspring Address - October 2013

Ian is six months old! How did that happen? He's no longer a newborn and has firmly entered babydom. He's made big strides in manual dexterity and hand-eye coordination, being able to see something that he wants to hold and grab it successfully. No crawling or sitting yet, but he can pull his knees up under him if the surface is slippery enough. His babbling has gotten very word-like, as well. While he continues to breastfeed a few times a day, and once at night, much more of his sustenance is formula than ever before. We've even begun giving him pureed fruit, but he remains largely unconvinced that it's something worth keeping in his mouth and swallowing. It's a process, and we're not rushing it. 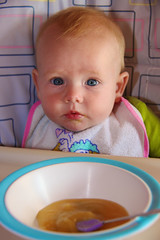 The decision to take Ian to daycare has been a wild success. The very week we took him, he became much more independent, i.e. able to be left alone in his play area for 5 - 10 minutes without screaming bloody murder, which has had a very relaxing effect on the rest of the occupants of the house. The daycare providers said that he's had a few moments where they had to carry him around in their arms, but that he's been much happier than we'd warned them he'd be.

I've been taking him in at 12:00 noon, and Marga has been picking him up at 4:00 pm, before collecting Nora at 4:30 pm. This allows me one hour of quiet for cooking before getting Nora for her 1:00 pm to 3:00 pm lunch break from school. It allows me to spend much better quality time with Nora during those two hours without having to worry about Ian's needs. It also gives Marga some peace and quiet in which to eat her lunch upon returning home from work at 3:00 pm. Before daycare, she would walk in the door, and I'd be standing there holding Ian, ready to pass her the baby like a baton on my way to work.

As this post was still a draft, I received a message from another daycare mother, who had gone to pick up her daughter:

I regret to inform you that your son, still so little, has you both completely fooled. It's so nice to see him sitting there so happy at daycare.

The other important event this month was my parents' third visit in 2013. Nora was very excited about it, and has a much better understanding of time – although she does still, frustratingly, interchange "before" and "after" in conversation – which allows her to look forward to future events like never before. We didn't make a calendar, but she talked about it right up until they arrived. 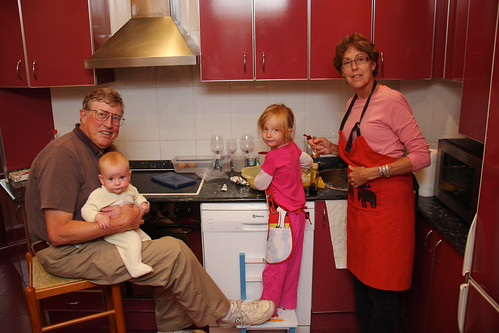 Due to a cocktail of openness to foreign culture, our fantastic hosting skills, and grandchild-triggered dopamine, they had a wonderful time. The bond that Nora has with my mother is extremely special. 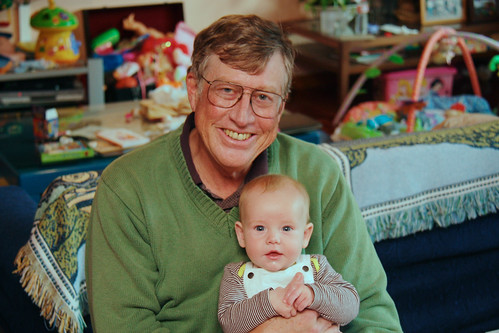 The Smell of Independence In The Morning

The following is a video that Nora's teacher sent me from when it was Nora's turn to, timidly, do the morning role call. Her teacher titled it, "Nora and her hair do role call".

The weather here in October is always quite nice, but this year has been unseasonably warm and sunny, rivaling any of the summer months. One day I was dressing The Offspring in two of their best outfits, and I noticed that they both were yellow with denim! Seemed like a photographic opportunity, so I plopped them both on the sofa for a shoot. Big Sister thought that Little Brother needed some help looking towards the camera. 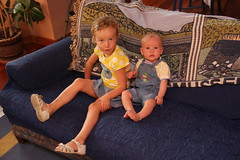 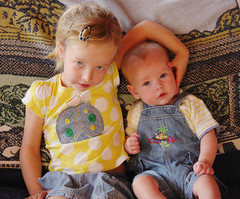 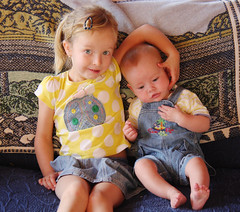 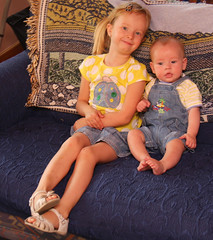 Ian continues to be quite a cutie, smiling at anyone willing to bend over and dote at him, but he has one sun that outshines all others. When his sister, Nora, is in the room, he only has eyes for her. She needs to do very, very little to make him burst into joyous laughter. Sometimes he even eggs her on with fake laughter, as if to say, "Entertain me!" Luckily, the adoration goes both ways, and she's happy to comply.

Some of his best laughter was lost before leaving the elevator because it took me so long to start recording a video. 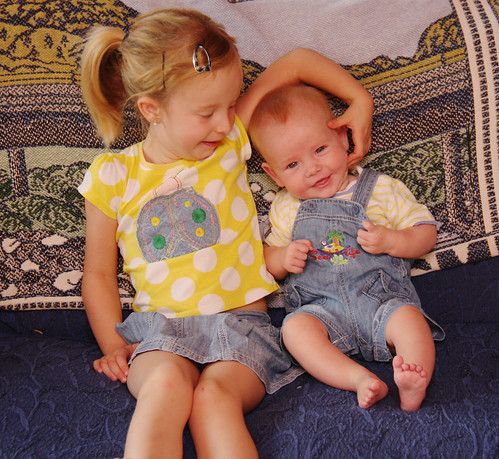