The following is a document written by my father, Paul Rasmussen, about his trip to visit us in Spain in October 2013.

October is my favorite month for visiting my son and his family in northern Spain. The weather is always comfortable, neither too hot nor too cold. Daylight begins around 8:00 am, and lasts until almost 8:00 pm. It is a convenient time to be away from home.

And then there are the birthdays. My son's birthday is on the 12th, and my wife's birthday is on the 16th. In Spain it is customary to take your friends and extended family out to eat on your birthday, often at a restaurant a bit classier than the norm. Some of my most memorable restaurant meals have been in Spain. To make the week even more worthy of celebration, October 13th is Erik and Marga's wedding anniversary, and not coincidentally the anniversary of the best party I ever attended. So we flew away from America on October 8th, and flew back on the 18th. 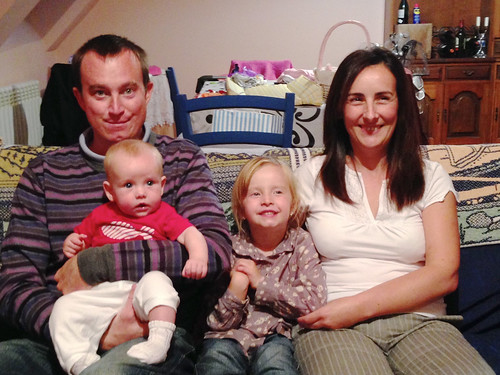 We left home on Tuesday, and arrived in Bilbao Wednesday morning at 11:30, where we were met by our smiling son and his smiling son. Ian is now five and a half months old, and full of smiles and laughter that he can't contain. Some think he is a good looking baby, but I don't see that many of them, and am withholding my judgement.

I did, however, notice several good traits in my grandson. Most importantly, he wakes up happy every morning. He considerately waits patiently until someone notices he is awake, then he smiles broadly at whomever discovers him. Most likely having been given a breast or a bottle in the early hours of the morning, he now waits for thirty minutes or more, allowing those older than him to break their fast before he vocalizes his desire for additional sustenance. 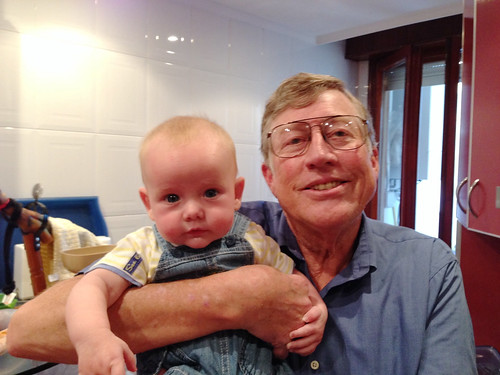 Ian enjoys hanging around the kitchen, watching things get done

Perhaps because he is the youngest, Ian almost always gets his way. And his way is being carried with his back pressed to your heart and his head right under your chin. This makes sense to me, as it is reasonable to assume that the human host is pointing at the most interesting thing in the room. Erik and Marga seem to be able to carry him like this for hours and still multitask. Betsy also does pretty well. When I carry him though, he gets heavier by the minute, and it becomes apparent to me while 64-year-olds shouldn't have babies.

Marga's maternity leave ended in September, so she was back at work full time. As Quality Control chief at an anchovy plant, there are high-volume times when she must work 14 hour days, and the day of our arrival was one of those. We were in bed before she got home Wednesday night, and she was back at work Thursday before we got up.

Last time we visited, the game Nora wanted to play most often was "Two policemen and a bad guy", with me, of course, playing the part of the bad guy. Since then, she has talked of it often, and I knew we would be playing it again, so when I saw the opportunity to buy some $4 handcuffs at the Ingles grocery store, I took it. Adding a simple prop to Nora's favorite imagination game turned out to be a good idea, as Nora had great fun using her key to handcuff me to the rocking chair, and I had fun pressing the secret release button and changing locations when she and her partner Betsy left the room. 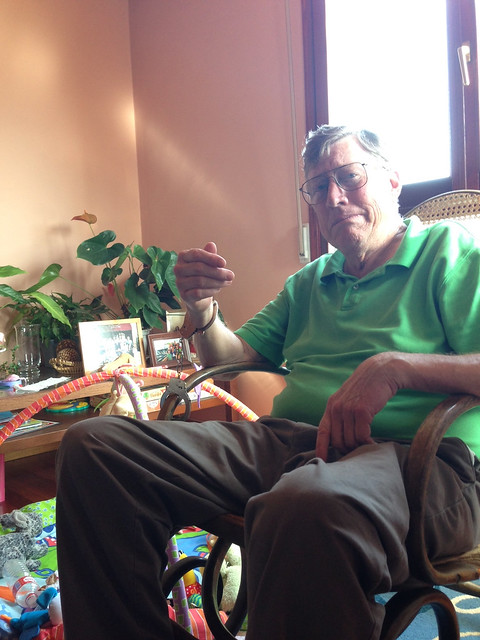 Nora enjoyed playing with the handcuffs

During the nine days we visited Colindres I never rode in a car, a post-college record. I did however, do a great deal of walking. It started with my daily 8:00 am walk to the Bar La Mar for a café con leche. Then down to the cruasanterí­a for the breakfast pastry. At 9:25 I walk with Betsy, Nora, Erik and Ian to Nora's school. We watch her class of 4 year-olds line up against the school wall and be led by her teacher into the building, and then we walk across the street to Susinos to buy the day's food. Around 11:00 we head back out to the street, pushing Ian in his stroller. We walk fairly slowly, in deference, I think, to the 64 year-old leaning on the stroller and using it like a cane to keep his balance. At noon we swing by Ian's Day Care program, and leave him and his stroller there for 4 hours.

The walk from 12:00 to 1:00 is the most fun. We stop 3 times for a small glass of Rioja and (usually) complimentary tapas. Each of the three of us buys one time. When it is my turn to pay for the round, the cost is usually 3€. At 3 minutes to 1:00 we gather on the school playground with a hundred other parents and grandparents waiting for our kid to erupt like a spray of water from the school doors. We usually go back to Susinos for two loaves of bread before going home for lunch. After lunch Erik puts on his PJs and heads for his office, and Betsy and I play with Nora. A few minutes before 3:00 Betsy and I walk Nora to school for her 90 minute afternoon session, and then we go home and collapse for an hour. 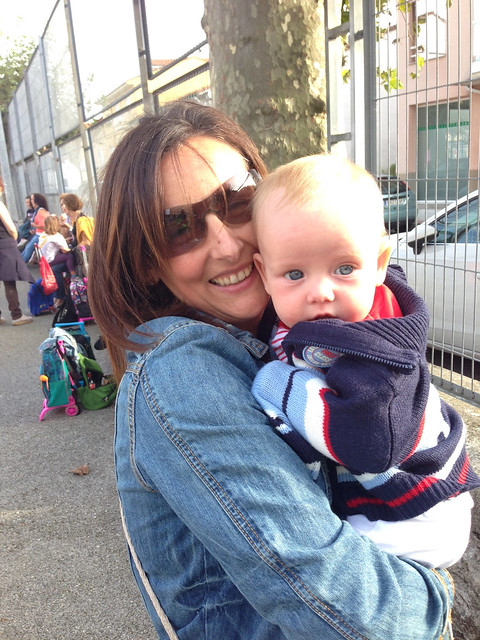 Ian is happiest when held by his mother

At 4:00 Betsy and I walk to Ian's daycare, and, with Ian in his stroller, take a 30 minute stroll through town, arriving at Nora's school just before she emerges promptly at 4:30. Like all the other parents and grandparents, we always bring a sandwich. Nora eats this slowly during the first 10 minutes of the hour or so she spends playing with the dozens of other kids choosing to play in the school playground after school, and then the four of us go for a walk.

Since my granddaughter is a barfly, we usually don't get far before Nora turns us into a bar. Sometimes it is the El Tablón, where they give us a free bowl of peanuts with our Rioja. Sometimes it is the Radio Café, where Nora usually is offered a complimentary mosto (grape juice), and their tapas is often bread, ham and cheese. Usually we end up at the Montecarlo, where Nora shows off climbing up and over bar stools and railings. Eventually, usually sometime between 7 and 8, depending on how long we are able to keep Ian either dozing or happy, we head home and dump a hungry baby who needs changing or his mother. Only then can I take my shoes off. 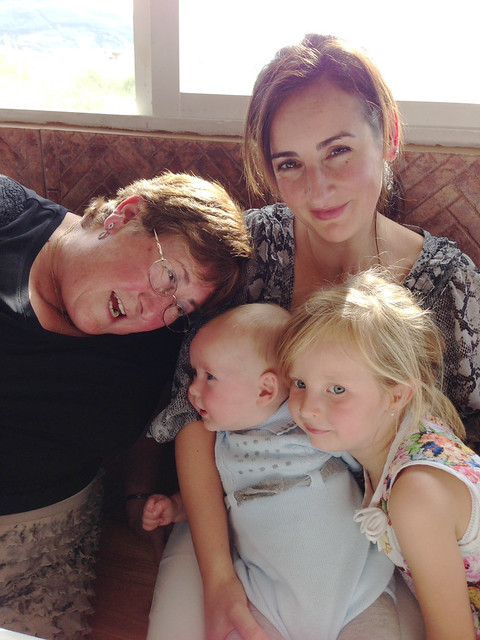 Marga, with her Mom and kids

I did the most walking on Saturday, because of Juan, Marga's father, who is a walking fool. It is not uncommon for Juan to take a fast five mile walk before breakfast. For all I know he did so Saturday morning before making the 90 minute drive from Mondragon to Colindres. He arrived at noon, along with his wife Marce and his other daughter, Belén. At 1:00 we all headed out to the street, where we walked around town, making a few bar stops along the way. Around 2:15 we headed to the restaurant Erik had selected for his birthday meal. Along with other things, two chunks of ox, each on its own super-hot stone, were placed on our table. Since one was placed directly in front of me, I managed to cut off some of the best pieces and cook each to perfection turning it as necessary on the hot stone. 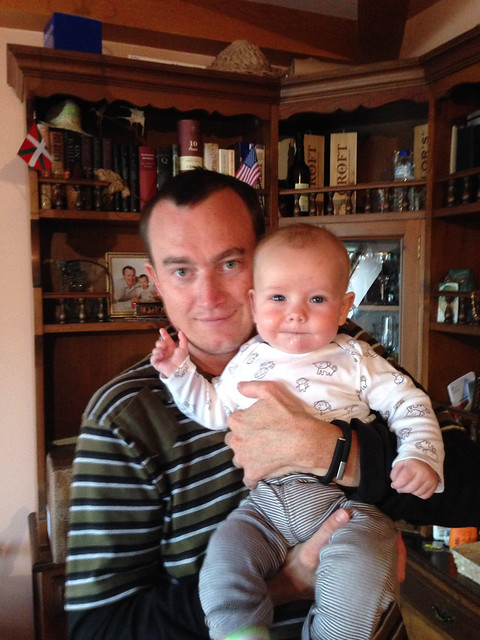 This is Ian's preferred way of traveling

We left the restaurant a little after 4:00. After being fooled many times on past such occasions, I knew this time we were not going home to flop on the couch and sleep off our lunch wine, and sure enough, we turned left instead of right, and went down to the waterfront. Past the large moored fishing boats and the city park, 45 minutes and two miles later, we walked back into town and stopped for a drink at a bar close to home.

As we left, I wasn't surprised when the women and children turned left to finally head for home, and the three men turned right. There were literally dozens of appealing bars within a five minute walk, and when Erik translated what Juan said, I was expecting a few ideas along those lines, so I was surprised that he wanted to walk to the far end of town and then down along the seafront to go the fisherman's bar by the pier. I wanted to point out that it would be at least a mile and a half shorter to turn left instead of right, but instead I put on my life-is-fine game face, and made sure I wasn't the laggard. After a wine at that bar, and then another close to home, I was surprised again when we walked past home to go to an Irish pub run by a friend of Juan. I think we made one more stop before heading home, but I don't remember. I didn't go out any more that day. Belén, Marce and Juan left for Mondragon shortly after dinner. Belén drove. 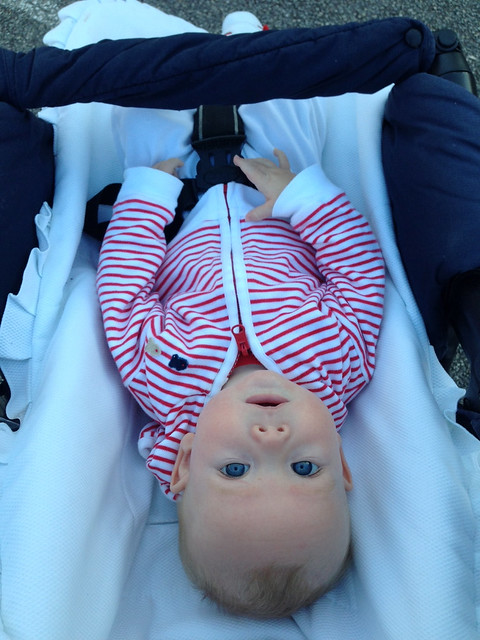 Watching Ian, in his stroller, watching me

On Sunday we all went out for lunch at Sakura - my favorite Colindres restaurant. I won't bore you by listing all the things I ate, but I would like to give Honorable Mention awards to the sizzling king prawns in Japanese sauce, the Maki Sushi, the Udon noodles with peanut sauce, the fried chicken ball, and the skewered quail.

Betsy and I were very impressed with Nora's memory. She talked about things we had done together a year ago when she visited us in America. She reminisced about the treasure hunts, recalling many of the places clues had been placed. She played games of Memory using cards laid out on the table, and won most games. 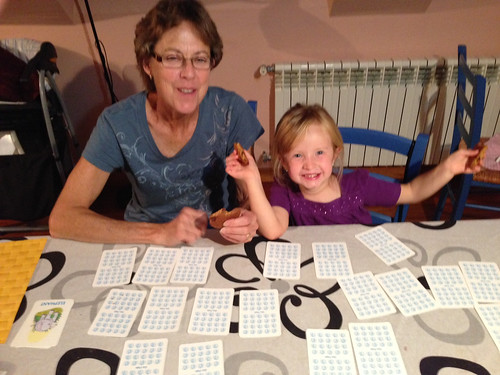 Nora's vocabulary has been growing, and she does a good job of asking what a word means when she doesn't know. Ian also vocalizes a great deal, experimenting primarily with motor boat sounds and siren sounds. 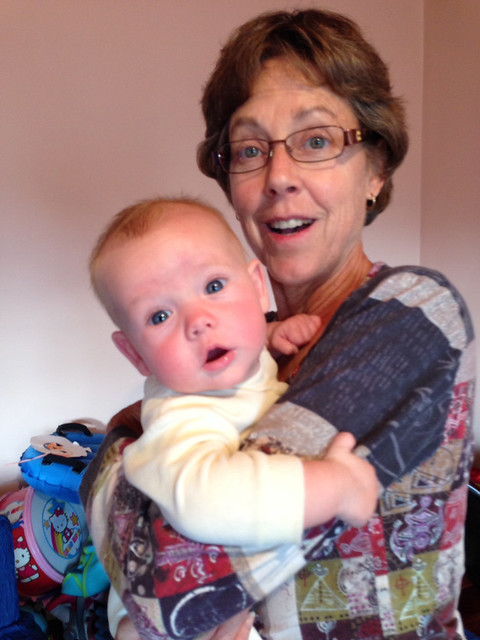 Wednesday was selected as our tapas lunch day. Instead of going home after picking up Nora, we stopped at bars both here and there and ordered a plate of food at each. Best was the hot calamari topped with super-thin fried onions.

Later on Wednesday Betsy chose Willy's as the location for her birthday dinner. Shortly after 8:00 we all walked there. Betsy and I shared a plate of various fried foods and a green salad, followed by Willy's special flan. 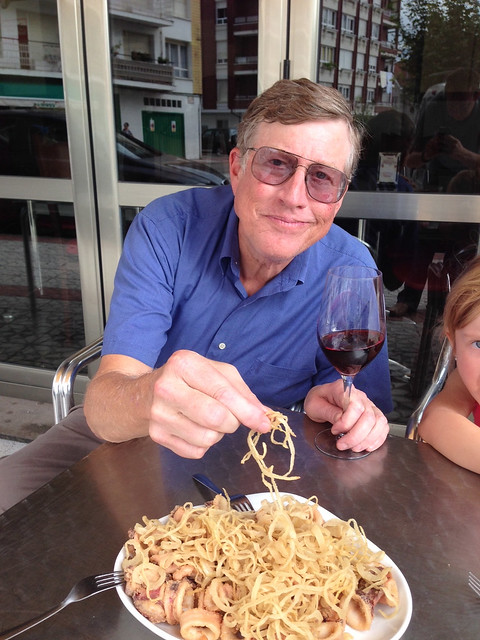 Fried calamari and onions at Willy's

On Thursday morning, around 11:00, Betsy asked Erik if we had time to walk up the hill to the church in Colindres de arriba before dropping off Ian at noon. Erik pointed out that we could drop him off late with no problem, and off we went. The weather was perfect, and the scenery fantastic. We stopped near the top and watched a couple of dogs playing together in a valley two hundred yards away. Behind the church I watched an old man raking hay and forking it into a wagon hitched to a horse. He uttered one word and the horse dutifully moved forward two steps and stopped. 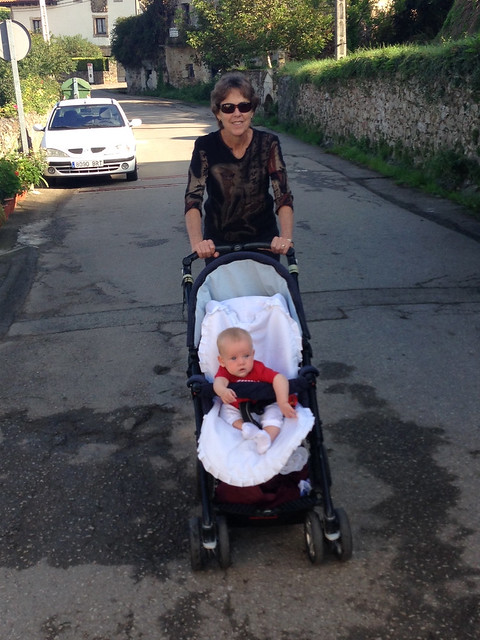 Walking up the hill to Colindres de arriba.

Nora has a great relationship with her Spanish grandparents, but her relationship with Betsy seems unique. They unite and cling like magnetic opposites, separating only at bedtime. Even then you can't pull them apart without twisting one while you pull. They are hand-in-hand almost very minute of all our walks. So, on our way to the airport, when Erik told me the last thing Nora said before she drifted off to sleep, I didn't waste one second feeling sorry for Betsy. 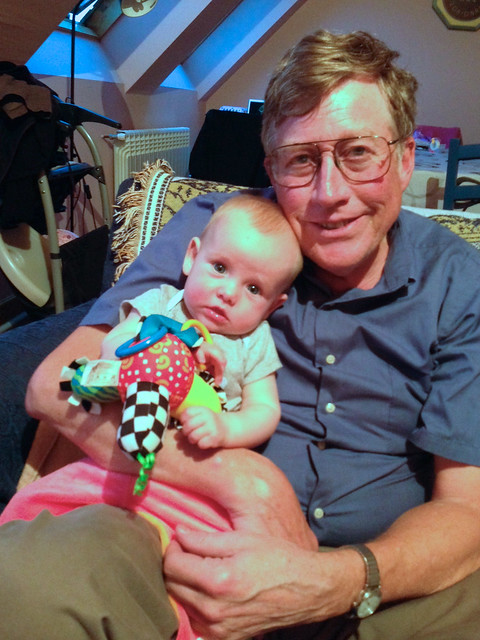