State of the Offspring Address - September 2013

This month saw Nora's triumphant return to school as a preschool sophomore. While it's true that she was the only kid in her class to begin crying three minutes before school started and begged me not to make her go to school, once her teacher promised that I could go in with her, she calmed down and fell right into the role of student, so much so that she didn't notice that I didn't go in with her. Last year she was a "turtle", and this year, she's a "bear", as each of the three preschool grades have a nickname and mascot. The mascot last year was Tomasa, and this year it's a panda called Chu-Lin, named after the panda that lived in the Madrid zoo while I went from kindergarten through high school. 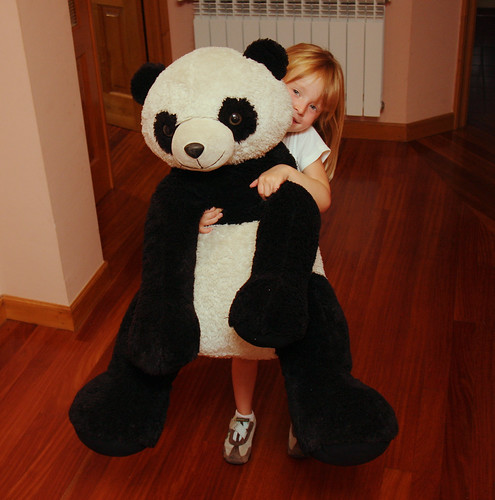 On the fourth or fifth day of school, it was Nora's turn to bring home Chu-Lin. Of course I chose that day as one of the rare times when I went to go pick her up carrying Ian in my arms, not in the stroller, so Nora ended up carrying this enormous bear home with her all by herself.

She's been learning a lot about bears in school. She knows about polar bears and panda bears and brown bears. The other day, she and I were sitting at the dining room table, eating lunch and discussing issues of the day, and she said, "Daddy, did you know there are bad people in China?" I didn't even know she knew that China existed. I suggested she continue, and she informed me that she learned in school that there are people in China that kill panda bears. "Yes," I nodded, that's very bad. 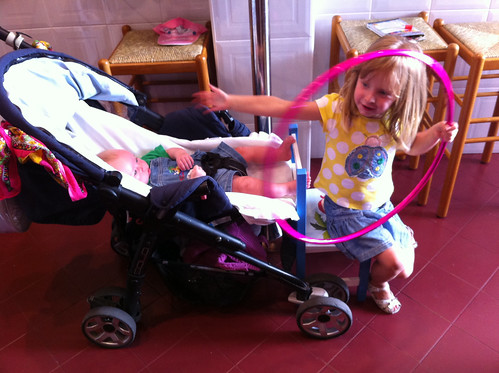 Believe it or not, I actually managed to take care of both Ian and Nora all morning long all by myself for the first few days of the month, and then, when school began on September 12, managed to consistently get Nora to school every morning, back from school, and fed, every day. There were definitely times when I just had to let Ian wail by himself while I cooked lunch or bathed Nora, but Nora did a good job of helping me entertain him while I cooked. One of her favorite games was to put a chair against his stroller, and, with her hula hoop, pretend to drive a bus.

I was quite surprised by her level of detail in her imaginary bus driving game, considering that she has only once used a bus as public transportation, when she was two years old. She would occasionally arrive at various towns and announce that everyone that wanted to get off here at Salamanca should exit the bus, and anyone from Salamanca who would like to go to Colindres should wait patiently for the other passengers to get off before boarding for Colindres.

We try not to let Nora watch too much television, but she can be really clingy sometimes when you're trying to do some chore, like cooking or cleaning or laundry, and the television is a handy way to occupy her for brief periods. She's a fan of several Nick Jr. programs, such as Dora The Explorer, Team Umizoomi, and Little Bill. We always have that channel set to English, so she watches all her television in English. She has learned a lot of general knowledge, e.g. what dinosaurs or spaceships are, from television that we have not taught her. And, because of the language situation, we can see exactly what concepts she has learned from television, because she knows them in English, and which concepts she's learned at school, because she knows them in Spanish. It's fascinating to observe. The bus driving game, for instance, developed in English, so it must have been from television. 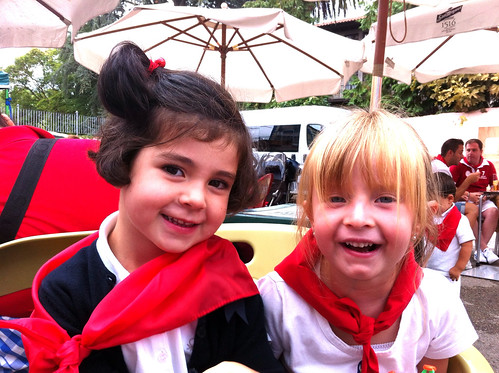 This is Nora's best friend Claudia, at the annual San-Fermin-like festival in Ampuero. Both of them are quite introverted and shy, but when they are together, they become chatty and active. 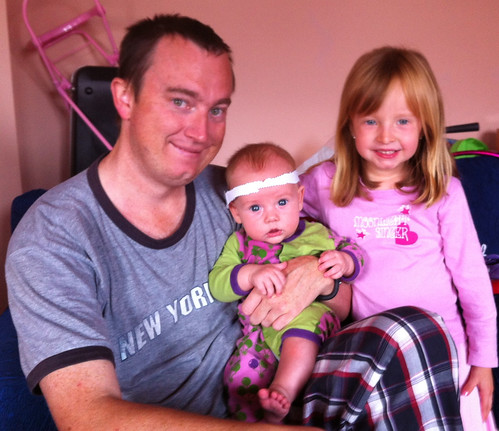 We bought Nora these bizarre scissors at IKEA that cut a sawtooth pattern. Her first idea was to ask for some "sticky tape", so she could make her brother a crown. 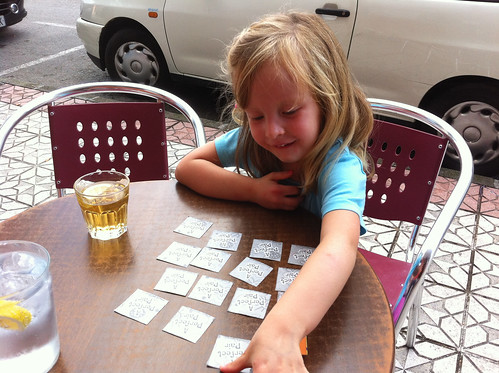 One of Nora's Dora-themed coloring books had a back cover that could be cut up into sixteen paired cards to play Memory. Nora is just the right age for such a game, and we've been playing it a lot. Her memory for card locations is quite good, but her search strategy for exploring the gamespace is terrible, as she will often turn over a card she just saw first and then guess randomly at the unknown cards looking for a lucky match. …but then the whiskey she has to sip when I match a pair doesn't help. 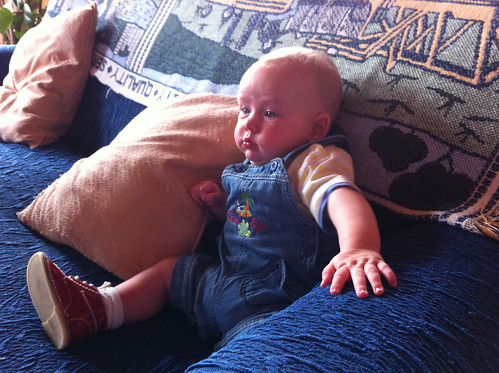 Ian is doing very well. He had a bit of a rough time with a cold and fever after his 4-month vaccination, but he's all better now. He certainly is a happy baby…as long as there is at least one person giving him their undivided attention and cooing at him.

My son uses variable ratio reinforcement to get people to coo at him.

The psychology of Behaviorism teaches us that the very best way to train an animal, humans definitely included, to perform a certain task is to give them what is called Variable Ratio reinforcement, where you randomize how many times the task must be done before a reward is given. If a slot machine gave out coins on every fourth pull, no one would play it. My son uses variable ratio reinforcement to get people 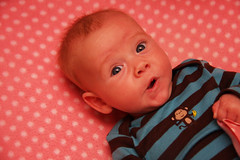 to coo at him. He won't smile or giggle every time you talk to or tickle him, but he will at least once in every twenty things you say to him. It amuses me to no end to observe whomever he is conditioning, myself included, respond to his reinforcement by trying to repeat the exact last thing, they did, the tone and actions, to get more of his sweet, sweet laughter.

Previously, on State of the Offspring Address… There was some equivocation about our daycare plans. We didn't take him to daycare at all during September, but will begin in October, although we haven't nailed down the exact hours. Stay tuned for further updates. 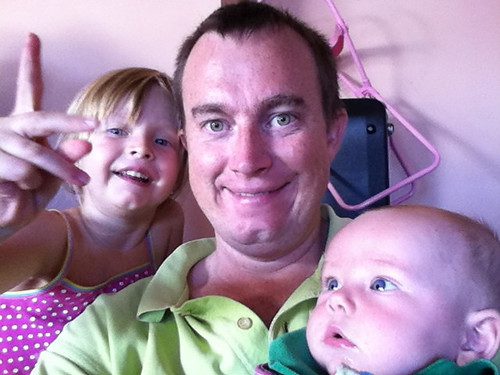