When you learn a second language, apart from the grammar rules, you obtain a very thinly spread vocabulary of a variety of subjects. But when you're living in a country that speaks that foreign language, and you delve into a hobby, like camping or sailing or carpentry, you realize that there is a whole new fractal universe of domain-specific vocabulary, words for all the nouns and verbs associated with a specific activity. One such example of a new domain that they don't teach very deeply in textbooks is all the vocabulary that goes with having and caring for a baby. I have two fellow Americans In Spain that are pregnant, so I thought I'd write a post outlining some vocabulary every parent in Spain needs.

la pezonera - A silicon "false nipple" that can be placed atop the real nipple to avoid irritation or if the baby doesn't suckle properly. I really hope you don't need one.

mamar - To suckle or breastfeed. Personally, I love this word, as it both reminds me how we are mammals and makes calling the mother "mama" make so much sense.

el biberón – Baby bottle. Often abbreviated "el bibe". At first I confused it a lot with el babero because it started with "bib".

el nene, la nena - An informal way to refer to a baby. When you're pushing your kiddo around in the stroller, people with toddlers will come up to you and tell their toddler, "¡Mira el nene!", or you may be asked the sex of your baby with, "¿Es nene o nena?"

el maxicosi, el huevo - an infant's backward-facing car seat. In our house, we only used "el huevo", but Maxi-Cosi is a name brand, by the Canadian company Dorel Industries, that has been adopted to be the noun, much like kleenex or frisbee.

el pañal, el dodotis - diaper (US) or nappy (UK). Like el maxicosi, el dodotis is a name brand – from Dodot, who pretty much has a diaper monopoly in Spain – that has made the jump into noundom.

la toallita (humeda) - wet towelettes. Never EVER run out of these.

la pupa - boo-boo, an injury sustained by a child. Don't forget to mete out justice!

hacer pis - to pee-pee. Humorous to me because it sounds like a Spanish-accented attempt at the more vulgar English word "piss".

It always struck me as odd how much the word "milk" is used in Spanish slang. 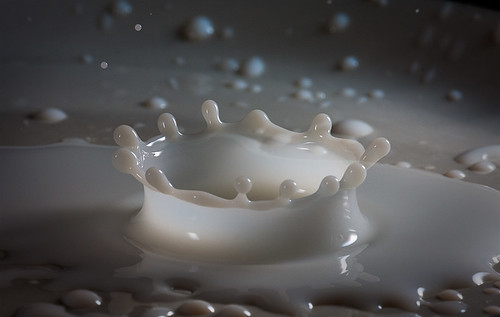 To be from bad milk

To be angry or in a bad mood

To do something of bad milk

To do something with bad intentions

To have a bad milk

To be mean or a complete bastard

To give a milk

This is the milk!

This is the goddamn limit!

I am until the milk

To be the milk

To be the unbelievably good/bad

What milk do you want?

What the hell do you want?

It's really gotten almost as versatile as "fuck" in English.

However, when you've got a baby, and you realize that, for the first few months of our lives, milk is everything! Then all the slang starts to make [slightly more] sense.

One thing you will notice is the Spanish tendency to refer to your baby as something they would like to eat. To say that a parent or grandparent is very fond of their baby, it's common to say "¡Se te caen las babas!", or "You're drooling!", as if the very presence of the child is stimulating your salivary glands to prepare for digesting it.

Another common exclamation about the cuteness of your baby is, "¡Me lo como!", or "I [want to] eat him up!" Put down the fork, Señora.

Everyone and their aunt has explained to me that, "here in Spain, we say:"

When they're little, you just want to eat them. And when they grow up you wish you'd eaten them. 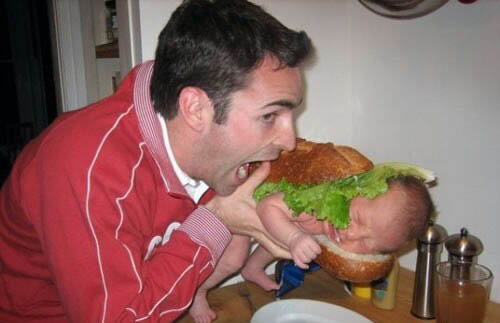 Don't worry, though. The Spanish don't actually eat their young; they just talk about it a lot.

Muchí­sima suerte a mis amigas, Kate and Erin. The pre-parenthood advice I'll never forget came from my friend, John. He said, "This is the most important thing you will ever do."