State of the Offspring Address - August 2013

The offspring have spent nearly all of August away from home, on vacation in Extremadura, a region of southern Spain. It was Ian's first time meeting all the people in Higuera de la Serena, the town that comes alive in August with all the old residents that left to find work. I was only able to go for two of the four weeks that they were down there. Since it's her fifth year going, Nora knows all the customs and traditions of small town vacation life, where all the bars are, etc. She has always had a bit of an Extramaduran accent, but she really got it thick when she was there, much to the amusement of everyone but her parents who wish her to speak a little more correctly. 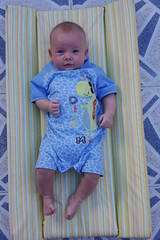 When Nora was a baby, I used to refer to her as "emotional black hole", where we poured in all this love, and she seemed more or less indifferent to everyone, rarely smiling or giving anything back. Her brother, on the other hand, is the complete opposite. Ian is an absolute delight play with. If you make funny noises at him, he smiles and laughs. He reflects it all back to you. It's very addictive, goofing around with him. Pretty much every friend of the family that meets him makes the same comment, "He's so much more friendly than Nora was!" We all nod in agreement.

I'm a little concerned, however, that so much contrast might not be great for Nora to hear. The last thing we want is for her to define herself as "the unfriendly one" and play out that role. So we've decided, at least in the immediate family, to stop saying how much more friendly Ian is than his sister was. Society is so geared towards praising extroverts already; we don't need to add anything to that.

When I went down to Extremadura, I met my family in Zahí­nos, the home town of my father-in-law, where we stayed for a couple days. Nora hit it off immediately with her six-year-old second cousin, Valle. Both girls have grown up as the only kid among a family of doting adults and it shows in their bossiness. I suspect they will grow up spending time together each summer and become friends, much the same way their mothers are. 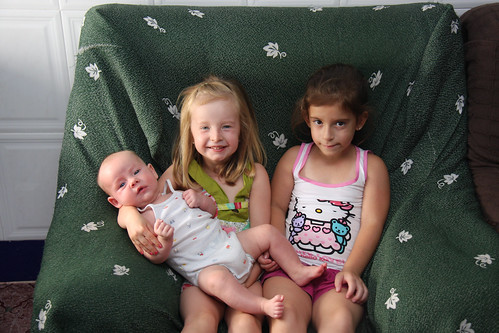 Nora enjoyed showing off her brother.

We also got to spend a very short time with Nora's friend, Carla. Children are really good at picking right back up where they left off a year or two earlier. They seemed like lifelong friends. And in some ways, they are. 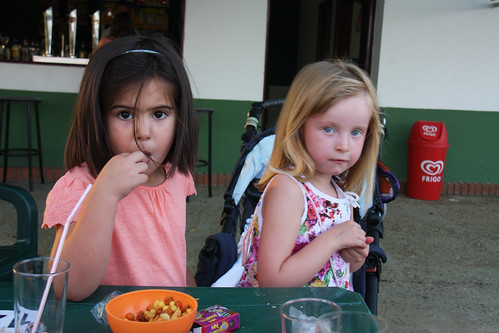 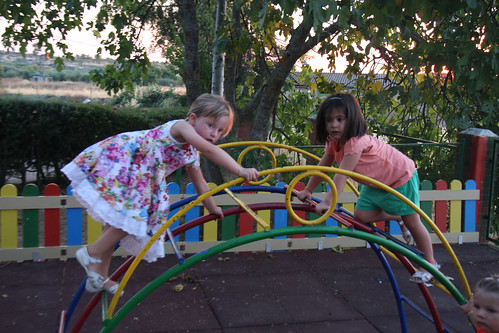 Climbing on the playground.

After a rocky and painful start, Ian and his mother have finally nailed the whole breastfeeding thing. 1) Baby cries, 2) You plug him in, 3) Baby sleeps. It's just like charging your mobile phone, if your mobile phone turned the left over electricity into a squirt of stinky mustard goo every other day. Plus, it's incredibly handy, having two bottles of warm milk in your bra at all times, as long as you don't need to do anything away from the baby for more than three hours. Starting in September, she'll be back at her job (they gave her two weeks of vacation to tack onto her maternity leave), and we've been trying to ease him towards the bottle. The tough part is that weaning is a double-edged sword (two-sided coin? two-way street?), where the mammary glands have to be slowly convinced that they don't need to produce anymore. We'll see how it goes. 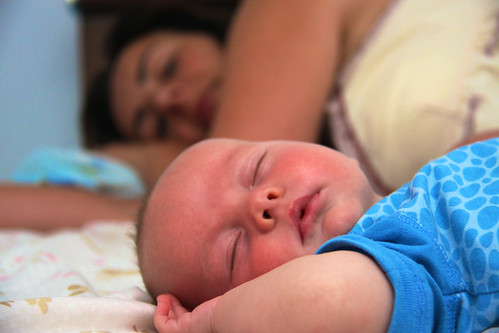 We only have a week and a half to go before school starts on September 12. I think it's clever how they start on a Thursday to make the first week a little easier. Nora's pretty indifferent about it, she's neither excited nor complaining.

Personally, I'm a little terrified about being alone with both kids until 3 PM for the eight weekdays before school starts. I'll manage, of course, but Ian's going to be doing some crying when I just can't give him my undivided attention.

Ian is very high maintenance; you have to be with him, playing with him or walking around with him at all times or he's upset and crying. This means that he will certainly spend almost every single minute at daycare crying. My parenting philosophy has shifted, in the past couple years, from a more typically masculine "It'll toughen him up!" mindset to a more typically feminine "The poor baby needs me!" one. As such, I'm reluctant to submit my child to a scenario that he will very much dislike, even though having a few hours of alone adult time would be oh so precious.

We've spoken with the daycare, and they, as always, are flexible and willing to accommodate us, whatever our needs should be. Since my work schedule and my wife's don't actually overlap, I'd like to attempt not taking Ian to daycare, although I don't know how long it will last. There may just be no other option.

You'll hear about whatever we end up doing here, so stay tuned!

Here are some humorous conversations I've had this month.

Nora: I'm looking at the...estrellas. Daddy, how do you say "stars" in English?

Me: You just said it!

Nora: Daddy, look at all the stars!

Daddy: Yes! Very pretty. Some day we have to talk about what stars are.

Nora: Okay. How about tomorrow when we get up? I'm tired now.

And, after my wife and kids came home from a month away from home and a week away from me…

Me: Did you miss this house?

Nora: No, who I missed was you.

At the end of June, we measured how tall Nora was and marked it on a wall. Then, after she came back from Extremadura, we measured her again. Exactly 60 days had passed. 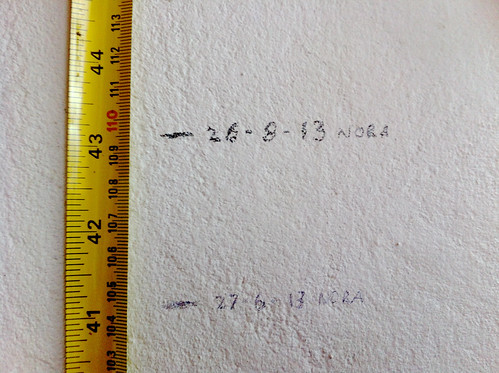 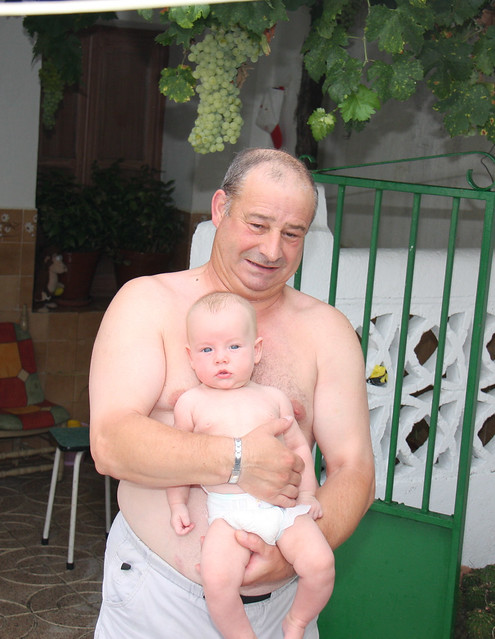 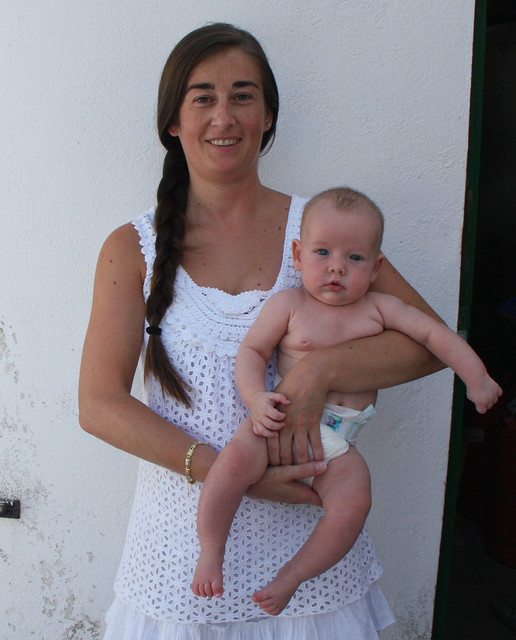 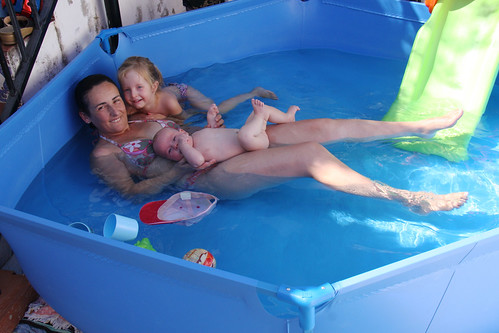 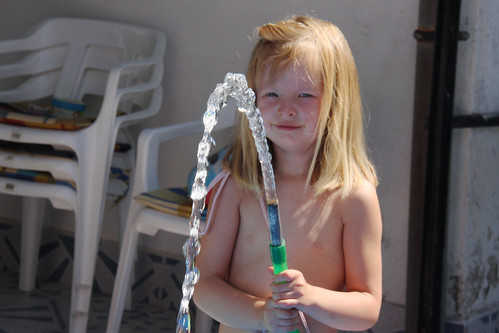 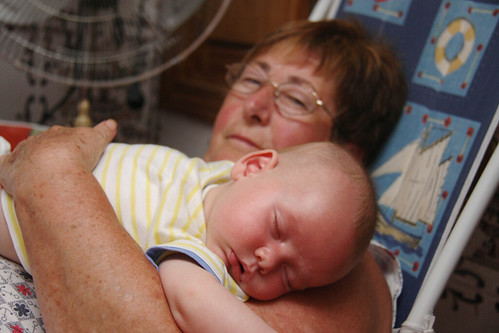 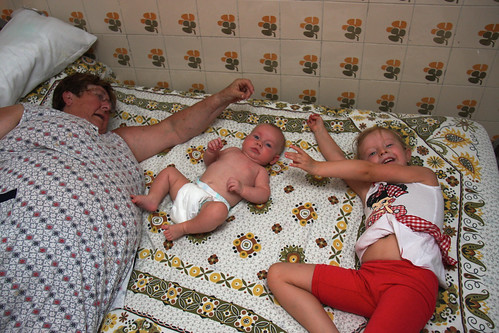 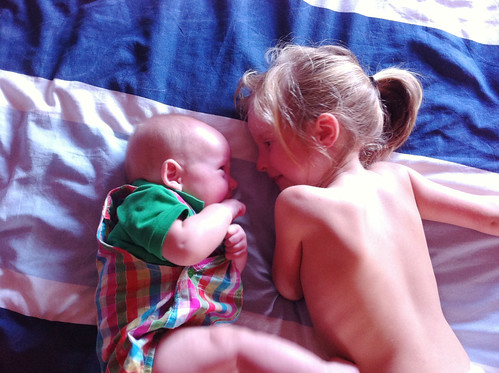