After living in Spain for so long, I have internalized so much of the culture, that I forget what is quirky about it and what seems weird to outsiders. One aspect of Spanish culture that visitors often misunderstand is just how central bars are to Spanish society. When you first visit Spain, you will notice that there are a lot of people in the bars every midday and evening (and even for breakfast), and you might think, "Wait, where's the economic crisis?" There is one simple fact that you need to know to understand almost anything about Spanish social culture: In Spain, no one socializes with friends at their home.

Obviously there will be some exceptions, but as a general rule, it holds true, especially compared to other countries. In Spain, it's very common to be best friends with someone for ten or twenty years and never have seen the inside of their house. What you do with friends is go out to bars, and when you're done socializing, you go back to your own homes.

There are a few causal feedback loops at work. 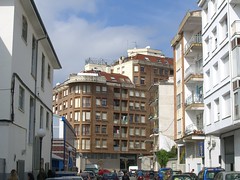 This insight also explains the very dense – tall apartment buildings – living conditions in Spain. I live in a small town of seven thousand residents, and 95% of those people live in apartment buildings that are at least five stories tall. Do people only socialize in bars because they all live so close, or do they all live so close because they only socialize in bars? Both, probably. 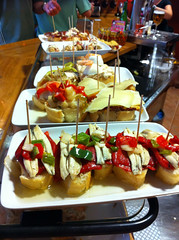 The exception to the rule is family. Space permitting, extended family members do tend to eat at each other's houses, but often space is not permitting.

One interesting side effect of this phenomenon is the Basque txoko (pronounced "choco"). The formal txokos are "gastronomical societies", and are made up of a group of friends that have pooled resources to rent or buy a restaurant where they can cook meals and socialize privately together. More informally, the word txoko can be used to refer to a garage or basement that someone has installed a basic kitchen and bathroom in, where large dinner parties can be held. I have several friends, whose houses I've never set foot in, that have invited me to their "party garages" for meals.

Now that you understand this basic tenet of Spanish society, a lot more things that make Spain so different from other countries make more sense, like why children go to bars, why the bars always seem so full, even in tough economic times, and how a town of seven thousand people can support thirty bars.