State of the Offspring Address - June 2013

June saw many interesting events in our family. First of all, my parents came to meet their grandson for the first time, then we had a visit from Belgium, and Nora finished her first year of preschool. So far her summer vacation has been going smoothly because the local town government has been organizing some "workshops" all week, where kids can go and do crafts or practice juggling or learn about music, which has been keeping her busy. The biggest change in Nora's behavior is her mimicry of her mother. Her older potty training doll, Potty Patty, has been all but discarded in favor of a baby doll that she's had for years, which she treats just like her mother treats Ian. Sometimes she'll suddenly scurry out of a room like a house cat, remarking, "Oh no! My baby is crying!" She's named her doll, who has never before had a name, Lala. Nora likes to complain during dinner that "Lala is crying! She won't let us eat!" She's even been seen mimicking breastfeeding and diaper changing. It's pretty adorable.

The following video pre-dates the final choice of doll and name, with a baby apparently called "Marcos La".

Here she is singing a Spanish folk song to Lala as her abuela does the same with Ian to put him to sleep.

Ian passed his two-month doctor's checkup with flying colors, clocking in at 5050 grams and 57 cm. His weight has increased by 27% in both his first and second month. If he continues at this rate, he will outweigh me after 14 months, will weigh a metric ton shortly after his second birthday, and will have the same mass as the Earth by his 20th birthday. The boy eats a lot, what can I say?

He's a very demanding baby, who loves being pushed around the streets in his bassinet. Sometimes, when we're at home, he'll start crying when all his basic needs have clearly been met; he just wants to go outside. As soon as we're in the apartment lobby, he's happy. It's a bit like having a puppy, actually.

When he's not crying or sleeping, he's kicking ferociously, or, as I like to call it, doing the Gangnam Style dance. It pairs nicely with his sister singing the lyrics… "I'm a gay mustache!"

Here we are on a family outing to the local playground. Nora's not the most coordinated four year old around…

…but sometimes she can be quite graceful, like here dancing sevillanas.

And the girl has some pop-dancing moves, too!

Here is Nora and her friend, Claudia (also newly a big sister), walking their babies in the park:

It's been an exciting month. The state of the offspring is strong! 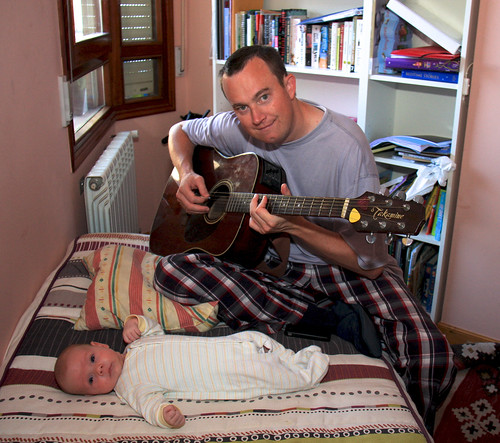