When our friends Simon and Paola were visiting last week from Brussels, we wanted to show off our local cuisine. As you can see from Simon's blog, they are fine dining hobbyists, taking advantage of their location in Brussels to try as many Michelin Star restaurants as they can. After I visited them and they took me out to one of Brussels' finest establishments, the fine dining bug bit me as well. It really is a fun experience.

After I visited them in October, I took my wife out to our local Michelin Star establishment, Restaurante Solana, and we were wowed, especially my wife, who had been dubious about the whole thing. So naturally we wanted to take Simon and Paola to Restaurante Solana to show off what Cantabria has to offer. After writing my previous blog post about Restaurante Solana, I found the chef, Ignacio Solana, on Facebook and sent him the link. He friended me and shared it on Facebook, which got quite a bit of attention from some of his friends – "Ooh! They're writing about you in English!" I enjoy following him on Facebook because he posts news about his restaurant as well as photos when he goes to conferences where all the good chefs get together to talk about…I don't know…cooking.

The week before we went, I sent him a message on Facebook, telling him, "Hey, remember me? The American who wrote about you in English? Well I'm coming back to your restaurant on Friday and I'm bringing my fine palated friends from The European Capital to evaluate you." I got back a noncommittal, "Okay, we'll be there!" response.

As in many aspects of life, choosing a wine from the extensive (470 options) wine menu is all about confidence and looking like you know what you're doing. I found the level of wine I drink at home, and kicked it up a notch, choosing a Marques de Vitoria, Reserva. 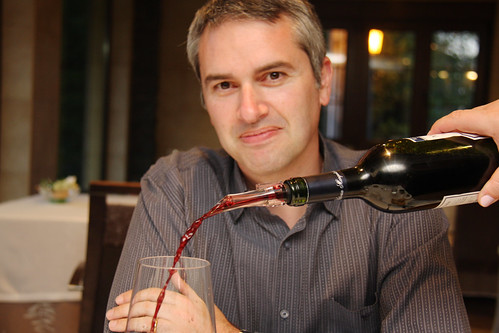 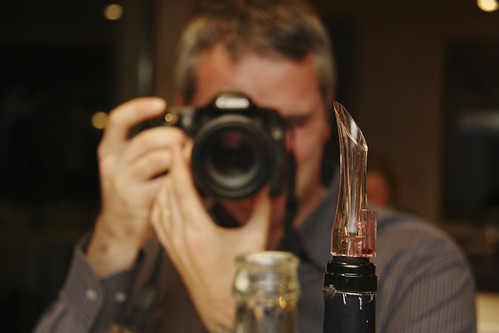 I really want one of these wine bottle aerating nozzles. Simon and I, with our dueling Canon 40D's, took a lot of photos. His are here.

We ordered the tasting menu. Unless you can afford to go every week, going to a high quality restaurant like this and ordering too much of any one thing is a big mistake, if you ask me. You want to experience as much of the chef's repertoire as possible, since that's what you're paying for.

To remember the names of all the dishes, I used my iPhone's Voice Memos app to record my wife regurgitating – bad choice of words? – every word the waiter said after he left. With every single dish, we were reminded to "Mix the flavors with every bite!" which got a bit old after a while. 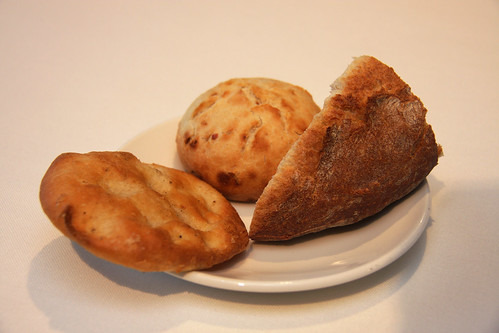 The oil bread was my favorite, but it was very salty. 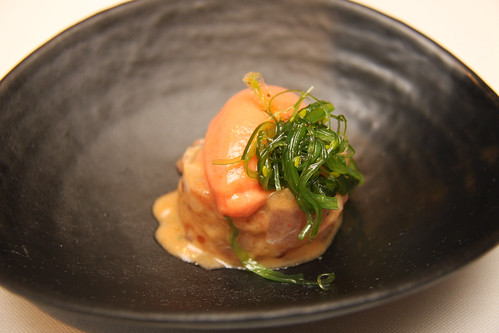 This was a strong starter dish. It was quite tasty. 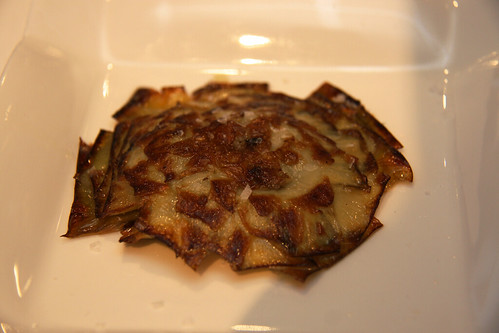 Grilled artichoke. It has been sweetened with olive oil, and you will find that oil in every bite.

This was an excellent execution of a strange idea. It was good, but definitely not my favorite. 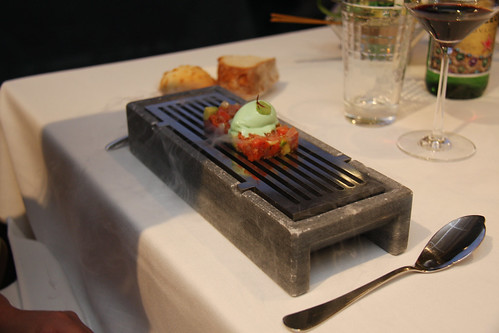 This was the only dish that was repeated from last time. 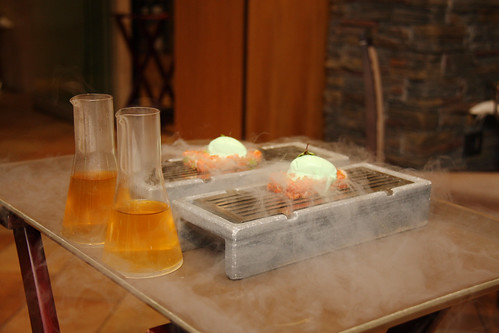 What you see in the beakers is the apple juice that was poured on the dry ice under the food to produce the table-enveloping vapor. 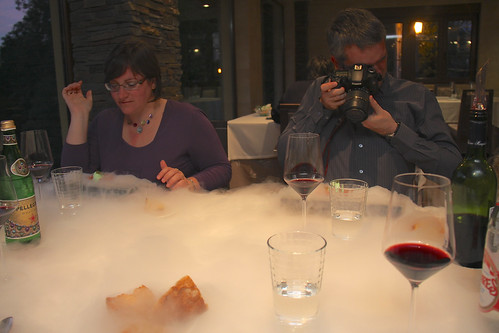 If it were up to me, every dish at every restaurant would be served with this effect. I loved it! The fog was quite appley, too! 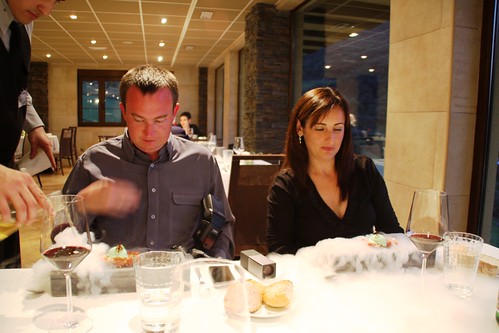 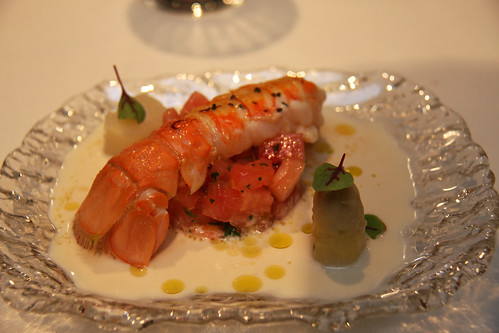 We had just been talking earlier in the meal about how the only food I really dislike in Spain is the white asparagus, and then out it came. It was by far the best I've ever had, but it's still a not-so-great taste with a displeasing texture. Although you can serve me anything next to a fresh lobster tail, and I'll be happy. 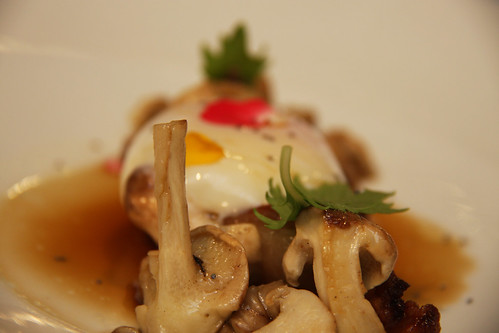 A seasonal dish of sautéd wild mushrooms, a poached egg, and a piece of bacon.

We joked that this was pretty much a "full English breakfast". Bacon, eggs, and mushrooms. All that was missing was the black pudding and a sausage. 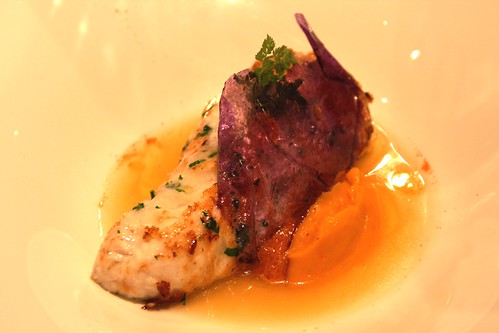 This dish was so good that I forgot to take a photo of it. The photo is Simon's.

Fish is a food that is very difficult to get right, and, in my experience, it's the best place to identify a really good chef. Anyone can cook a pork chop or a beef steak reasonably well, but fish is really easy to get terribly wrong, and very hard to get just right. I'm pretty sure this was the best monkfish I've ever had.

Candied suckling pig with a peach.

I also missed this one (photo by Simon), but I got it with my light field camera (click around in the image below to refocus!). The suckling pig was the only dish that actually made me moan in pleasure. The meat was as perfect as little piglet can get. 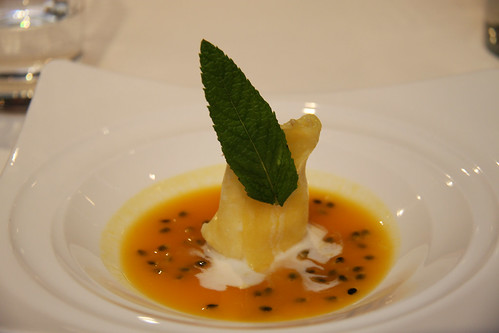 Coconut and pineapple ravioli with passionfruit.

This dish was exciting because it was both very sweet, the ravioli, and very sour, the passionfruit sauce. My wife seemed to feel the sourness more than the rest of us. 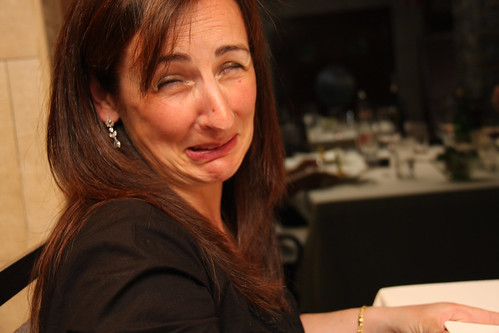 Not a face you really want on your restaurant's review, but, on the other hand, I think a chef might like that his customers have very strong visceral reactions to his dishes, in the same way that painters or authors want to evoke emotions in their audience. 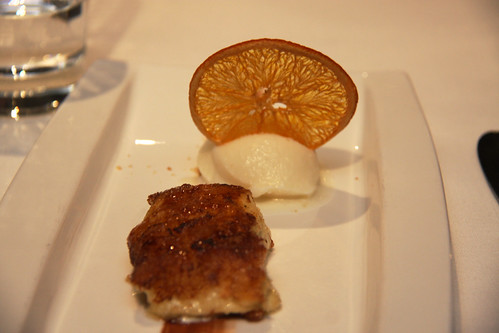 The warm sweetness of the bread was contrasted sharply by the cold sourness of the lime ice cream. The orange was absolutely gorgeous, more so to the eye than to the tongue.

This shot is fun to play with.

That was the end of the tasting menu, but then they brought us a complementary shot of something creamy on a bed of cookie crumbs. 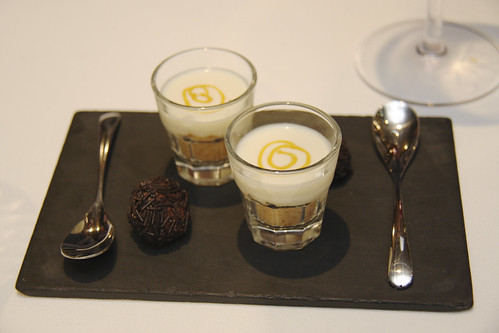 By the time we finished, it was after midnight, and we were the only ones still in the restaurant. As I tried to catch the waitress's eye to ask for the check, I was starting to debate whether or not to ask to see the chef, or just forget about the whole thing.

But just then, out he came!

He walked over to our table, directly to me and shook my hand. He explained that, after I'd mentioned we were coming back, he had looked up the exact menu we had had in December and had made sure to not repeat anything, besides the salmon showpiece. When I reminded him our friends were from Brussels, he said, "Oh yes, I'm familiar with Comme chez Soi," the exact restaurant I'd been to with Simon and Paola!

He asked how we enjoyed it and how it compared to the previous time. I was honest and confessed that we had liked the selections better the first time, and that this time, there had been just a little too much stimulation of the sour taste buds. The meal was still very, very good, but less mindblowingly amazing than the first time. We thanked him and he went back into the kitchen.

Already I can't wait to go back!

The evening was very enjoyable, especially because it was our first night out without children since our child inventory doubled, and for the enchanting company and conversation.