Today was Nora's last day of school for the year; her first scholastic year is in the books. This school year has flown by. Nora has received three report cards (different columns in the same booklet) throughout the year, and it has been interesting to chart her progress. I'm convinced that the teachers intentionally give low marks early on so that they can show improvement throughout the year, but that's understandable. In each "subject", the children receive a grade of either one, two or three X's, with XXX being the best grade. From the very first time we saw the report card, we were curious as to why she only received XX in English, since she's very clearly bilingual. I spoke once to her English teacher (in Spanish) about Nora's performance in English class, and she said that Nora is pretty shy and participates pretty minimally in class. Also, bilingual children learn early on that certain environments require certain languages, and she knows the school is a place to speak Spanish. But, her teacher said, very rarely, Nora will forget that she's in school and will spill out a fully formed English sentence to the English teacher.

Again, after the second trimester, I was disappointed to see only XX for Nora's English grade, but, as I have no concern about her actual knowledge in that area, I didn't bother to speak to the teacher.

So imagine my surprise to see her final report card today. 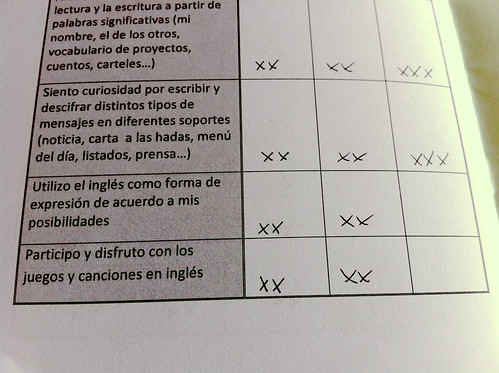 I use English as a form of expression in accordance with my possibilities.

I participate and enjoy the games and songs in English

I'm hoping/assuming that the real explanation is that, either the English teacher wasn't available to give the final scores to anyone, or she specially excused Nora from grading because of her bilingualism. In this case, she really might not "participate and enjoy" the English class, and there's no doubt that she doesn't use English "in accordance with her possibilities", so I can't really fault the teacher for marking her down.

Of course bilingual parenting blogs and groups are full of such stories, of students getting poor grades in their "foreign" language classes, either because they are overconfident and don't bother, or because they speak with less accent than the teacher and get marked down for it. It's a funny phenomenon, and I thought I'd add this post to the pile.