The following is a document written by my father, Paul Rasmussen, about his trip to visit us in Spain in June 2013.

We left Morganton at 1:15pm on Sunday, and landed in Bilbao a little before noon on Monday. It had been just a little more than two months since our last visit, but during that span our second (and probably last) grandchild had entered the world, so we needed to go visit.

I can't sleep when flying overseas, and I find the long flights much easier to tolerate since I stopped trying. The US Airways flight from Charlotte to Madrid did not provide us with seat-back screens, so the selection of movies was out of my control, which explains why I watched Jack the Giant Killer, Die Hard 12, and Parental Guidance. After a three hour layover in Madrid we took a one hour flight to Bilbao. Erik met us at the airport and drove us the rest of the way to Colindres, where we arrived just in time to pick Up Nora as she left school at 1:00pm. After a quick stop at Susinos to buy bread, we walked home and met Ian Rasmussen Matamoros. 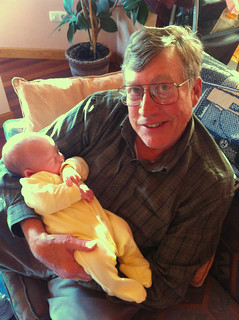 It felt great to hold him. He was beautiful, of course. Muy guapo. Physically, he seemed perfect, with gentle blue eyes, and skin so soft I wasn't sure when my calloused fingers made contact. Behaviorally he was almost perfect. He was content and silent when his needs were met, and when he was wet or hungry he communicated with gradually increasing volume. His single flaw was his fondness for being active between 2 and 5 o'clock every morning (although I never witnessed this first-hand). His parents were patient and attentive, and with the exception of his mother's mammary glands, seemed totally interchangeable. His big sister gave him soft kisses every day.

It was wonderful spending time with Nora. At age 4 she was, of course, constantly testing her boundaries, and often seemed selfish and demanding. She latched onto her Grandma immediately and never let her go. The following scene played out many times. 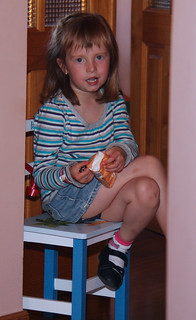 As on our last visit, I was enormously impressed with Nora's multilingual fluency. When spoken to in Spanish, she responds in Spanish; when spoken to in English, she responds in English. While I would guess that her fluency in Spanish exceeds her fluency in English, I have no way of knowing. All I know is that when I speak to her as I would to an adult, she seems to understand every word, and she surprised me every day with expressions like "easy-peasy", and "So there!"

I slipped easily into my Colindres routine. I was dressed by 7:30am, and left home around 7:50am. I stopped at the Bar La Mar for a café con leche grande, and occasionally a zumo de naranja natural. Shortly after 8:00am I stopped in at the cruasanterí­a, where I was usually the first customer of the day. Although a closer bakery sold croissants for three for a euro, I didn't mind paying treble here. For Nora (and me) I usually chose the fresh, hot napolitano de chocolate. Back home by 8:15am I almost always found the table set, and the coffee almost ready.

My Spanish family tends to enjoy breakfast in their pajamas, and to dress afterwards. Nora, attached as always to Betsy, would go upstairs a little before 9:00am, and descend, looking as cute as a button around 9:20am, perhaps with enough time to sweep up the pastry crumbs under Grandpa's chair and elsewhere. At 9:27am, Erik, Betsy and I walked Nora to school. At 9:30am the school's siren sounded, and the older students ran in. At 9:31am Nora's teacher, Viky, appeared at the door, and Nora gave Daddy, Grandma and Grandpa a kiss, and along with her 23 classmates, raced to form a line in front of Viky, each one grabbing the jacket or shirt of the student in front of them, as they had all year. Like a train, they followed Viky into the school. 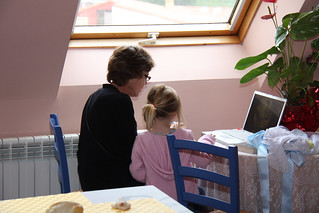 When the students were gone, the parents and grandparents socialized for another few minutes, and then we made the 30 second walk to Susinos grocery store to pick up whatever was needed for lunch that day, except for bread. Back at home, Erik would try to get some work done before preparing lunch. Betsy and I read or attended to Ian. Around noon we put Ian in his stroller and went for a walk, stopping at one or two bars for a wine and tapas. One o'clock found us at the school, ready to meet Nora when she ran out. Back across the street at Susinos, we bought the daily two loaves of bread, and then headed home for lunch. 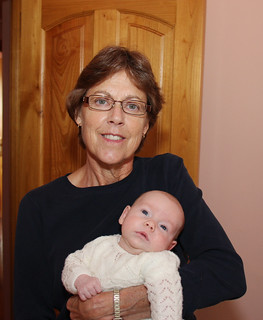 After lunch, Erik goes to his office to work, Marga takes care of Ian, and Nora sets the agenda for Betsy and me. My favorite game was "Doctor", where I got to be the Doc. She would choose one of her five dolls, put it in the stroller, and go sit on the couch (the "waiting room"). From the chair, six feet away, I would ignore her for a bit, then call out "Nora Rasmussen Matamoros". She would then get up, come into my "office", and hand me her baby. I would use the three items in her Doctor Kit that I knew how to use, the stethoscope, the ear-nose-scope, and the knee hammer. Then I would look at her gravely while she looked at me intently, and deliver the news. One baby was perfectly healthy, and one was pretty sick and had to stay with me for a day on the telephone stand which served as my Infirmary. The others all had a problem for which I had a solution, which always depended on Momma Nora making sure that the child took something or wore something which would over time lessen the problem. I stressed to her that the baby would not want to, but that she, the mother, must insist. Neither of us ever cracked a smile, which almost cracked me up. 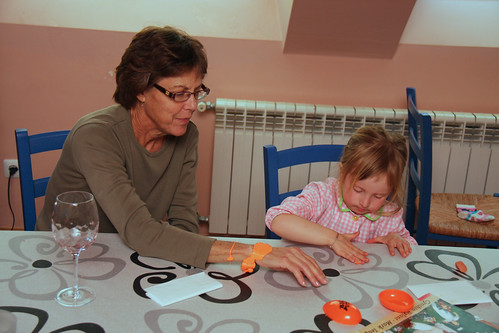 The game I enjoyed the least was "Bad Guy and Two Policemens (sic)". I probably would have enjoyed this game if I had ever gotten to be a cop. I was constantly expected to stuff things into my pockets and my shirt. I never enjoyed more than 20 seconds of freedom before I was detained, searched and incarcerated on the couch. I was expected to escape by stealing the jail key hanging out the back pocket of the jailer as she swept the floor, but I was never able escape for more than 20 seconds before my disappearance was noted and the search of the lower floor (minus Daddy's office) began. 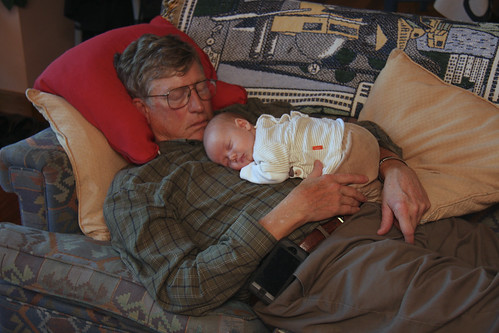 I was amazed at how great Marga looked five weeks after giving birth to my huge grandson. I try not to think about the whole birth thing. It seems too amazing for words, and I can't think without words. I do suspect that if it was a 50/50 thing that determined at conception whether the man or the woman bloated 'til birth, the world overpopulation problem would be solved.

On Saturday afternoon, Marga's parents arrived. They seemed pretty enthralled with Ian, and always bring presents for Nora. Juan and I experimented with an iPad translation app, with mixed results. At 8:30pm we crossed the street to the Catholic Church. There we were instructed by the Priest's assistant what to expect at the baptism portion of the next day's 12:30pm service. Marce, who would play Godmother to my Godfather, asked a few questions, but it all went well over my head. Back home Erik explained that, when asked a question, I, along with Marce should respond "Sí­. Estamos dispuestos".

We shared dinner, then retired, and in the morning we all enjoyed some delicious pastry that Marga's parents had brought from Mondragón. Sister Belén arrived, and soon all the women were applying makeup on each other. I went upstairs, put on my suit, tied my tie the right length the first time, put on my Dad's dark socks and my Spanish shoes, and went downstairs to wait.

Shortly after noon a passel of aunts, uncles, nieces and nephews arrived, and at 12:20pm we all sauntered to church. We arrived with perfect timing, and at 12:30pm the service began with some fine guitar playing and singing. Before long it was our turn, and Marga, Erik, Ian, Marce and I stepped to the front and faced the priest and the 150 or so parishioners. I must fear God, because inside my pants, my legs shook, and the last time that happened was my 1973 wedding. I mean, I've worked bigger crowds, and had bigger parts. 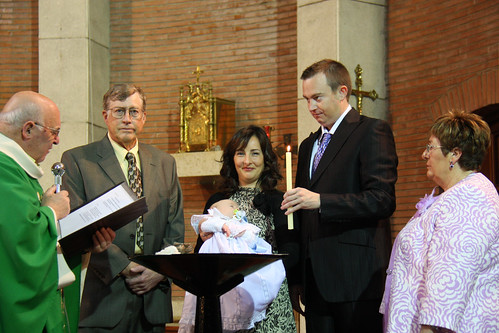 The priest sprinkled water on Ian, and mopped it up with the white cloth Erik had been instructed to provide, and Ian played his part perfectly with a few snorts and no crying. I think when the time came I probably mumbled my line distinctly, and before long we were back in the first pew enjoying the rest of the service, including the collection and the communion. When the service was over, we took a few pictures and then the priest's assistant turned out the lights. 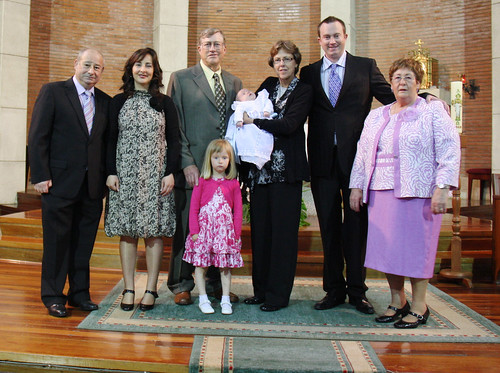 We all retired to the Comarca bar about two blocks away. Some had coffee, and some beer, but the drink of choice was a glass of Rioja. Soon we walked back to the area around Erik's place and organized a caravan to Laredo. There we walked to the restaurant selected by Marga and Erik, and our party of 20 enjoyed a marvelous four hours in a private room between 2:30pm and 6:30pm. The food was delicious. The Rioja was reserva. From one appetizer to another to another; from the entrée to the dessert to the coffee to the liqueur to the liqueur - I enjoyed it all. My Spanish family really knows how to party. 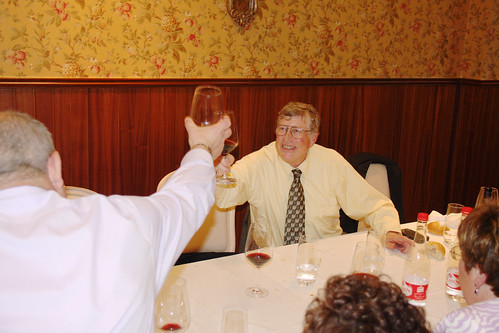 On Monday, Marce and Juan headed home, and Nora went back to school. For me, things went back to Colindres normal, and Tuesday was more of the same, except that shortly after lunch, Erik drove Betsy and me to the Bilbao airport. We had explained for days to Nora that we would be returning to America, but when it came time to leave, Nora became disconsolate. I'm sure she would have happily kissed me goodbye if I had been leaving Grandma there with her, but as it was, she couldn't stop crying. I think Betsy took this for what it was - the highest of compliments. 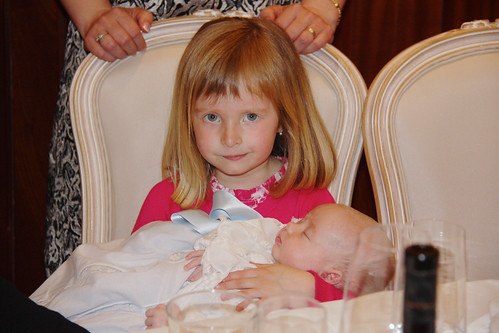 It had been wonderful seeing, holding and cooing over Ian. Erik and Marga are great parents; so patient and responsive. I am very happy being both Ian's godfather and grandfather. I plan to play my roles well. 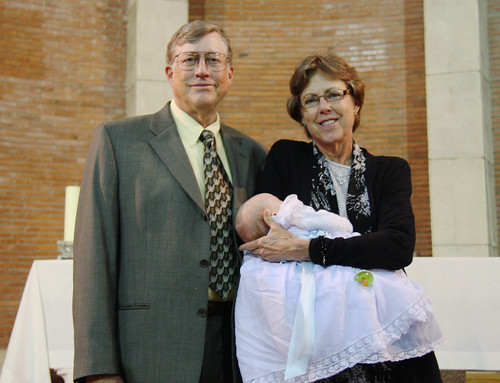