State of the Offspring Address - May 2013

The biggest event this month was Nora going off to camp for three days and two nights. Her preschool has been doing this for seventeen years, and the kids love it. Nora was pretty excited about packing her suitcase, with her stuffed animals and flashlight and bathing suit, and myriad other items on a list we were given. In the weeks leading up to the trip, she kept commenting on how she was really going to miss us, and especially Ian. She also never tired of saying that she was going to pasarlo pipa, a Spanish expression meaning to "have a great time". On the morning of the trip, there was a brief moment of cold feet in which she was crying, hugging her mother tight and saying that she didn't want to go. It was pretty heartbreaking, but we convinced her to just take her suitcase down to the school and discuss her concerns with her teacher. She agreed, but then forgot all about them when the time came.

Normally they start school at 9:30, but our information pamphlet said the bus was leaving at 10:00, so we were still casually at home feeding the baby at 9:38 when another mother called us to tell us that Nora was the only one that hadn't showed up yet. Embarrassed (we are usually one of the most punctual families), we raced down to the school. When Nora saw all the other kids in line, she instinctively got in line with them and followed their teacher, like little ducklings, to the bus. 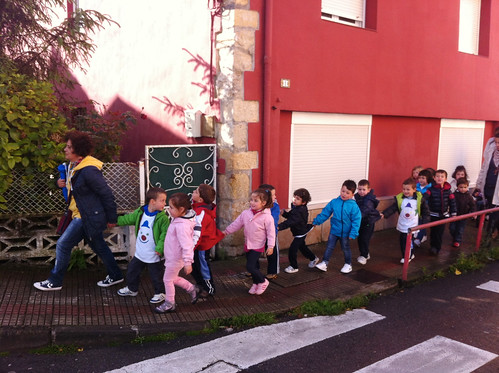 They got the suitcases and kids loaded onto the bus, but for some reason, the bus just sat there for ten minutes before actually leaving, with parents outside waving to their kids and the kids waving back. Unfortunately, this was just too much for Nora, and we watched a slow storm of tears form on her face. Her teacher picked her up and was consoling her just as the bus drove off. I felt pretty certain that she got over it as soon as her teacher started addressing the bus full of kids or leading them in song or something, but my wife was having maternal visions of her sobbing uncontrollably for hours on end. We knew that they only called parents to come pick up their kids (the camp is an hour away!) if the kid has a fever, and that that has only ever happened once. So the first day we spent fairly worried.

There had been some concern that Nora's best friend, Claudia, wouldn't be going to the camp because her baby sister was due to be born on the same day they left. It turns out that Claudia's mother has the same marksmanship as Nora's mother, because she started going into labor just as the bus pulled away. Claudia's sister, Mara, was born that evening.

The first evening they were at the camp, the mobile chatroom of mothers from her class lit up with activity. "Why hasn't the teacher told us anything?" "I thought she was going to send us a message?!" "What could be wrong?" "My husband and I can't sleep until we hear something!" "I've been pacing around all day with nothing to clean or tidy up." "When is [the teacher] going to tell us something!?" It wasn't until just after eleven o'clock that we got the SMS from the teacher telling us that everyone was asleep and had had a wonderful day. The collective sigh of relief in the chatroom was deafening.

When the teacher sent us a direct message the following morning, inquiring about the protocol for changing Nora's insoles the podiatrist prescribed her, we took the opportunity to ask if Nora was happy. We got back a video from her. Apparently, while the other kids were off doing some workshop or another, Claudia and Nora preferred (and this surprised none of their parents) to be with their teacher making the beds. But it was clear that they were both happy in their own ways.

The weather this week (and all year, really) has been terrible. Cold and rainy and yucky. The camp where they went, Albergue Paradiso, is very much a place to be outdoors, with the farm and gardens and activities. Unfortunately the kids this year had to stay indoors the entire time.

We don't have a lot of details about what took place at the camp, but we are getting bits and pieces. There was a clown named Tito, and a magician who kept losing his balls and hat, which the children would find for him. They saw a beekeeper give a presentation and got to touch a honeycomb. One night they had a sock hop which involved dancing on a mat while the six year olds (the oldest group) waved their flashlights around, and she came home with a balloon animal flower. Nora did confess that, on the second night, she snuck into her teacher's bed and spent the night there.

She has three more weeks of school, only in the mornings, and then she's officially a preschool sophomore! 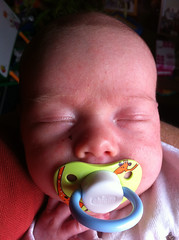 The littlest member of the family is doing well. He aced his one month doctor's checkup and impressed his pediatrician with his strength and stamina of holding his head up and looking around while prone. I'm pretty sure his sister couldn't do that for six months.

After a rocky start, he and his mother have the breast feeding thing worked out, although he usually needs a top up with formula for dessert. He is already very noticeably bigger than he was a month ago, a fact we verified by taking him to see Baby Mara at the maternity ward yesterday. Ian and Mara gazed into each other's eyes quite enchantedly. When it was time for us to go, I decided we should change his diaper, which I did on Mara's mother's hospital bed, and we had our very first diaper-off fecal event, spewing a nice brown puddle onto the clean sheets. He must have been trying to impress Mara… Son, I don't have a lot of knowledge about how to impress girls to impart to you, but I think we can mark projectile defecation off the list. 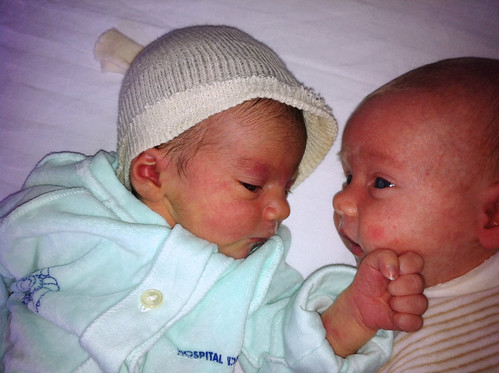 If you ever want your ear talked off, just ask the parent of two or more children about any differences between their kids. When you have a second child, the differences are all you can see. Ian is a much softer crier than Nora was, but he is also very much more interested in being held all the time. He loves nothing more than sleeping on his mother or father's chest. 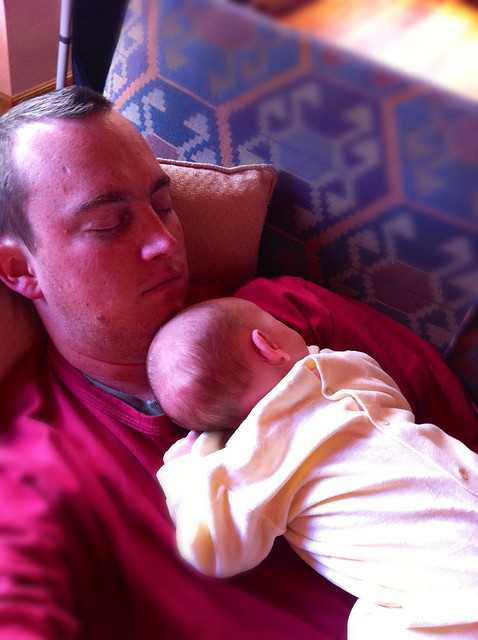 Next month we have several things planned. My parents are coming to meet Ian for the first time. We're going to baptize the little guy, a.k.a. have a big party, and then my friends Simon and Paola are coming to visit from Brussels. It should be fun! 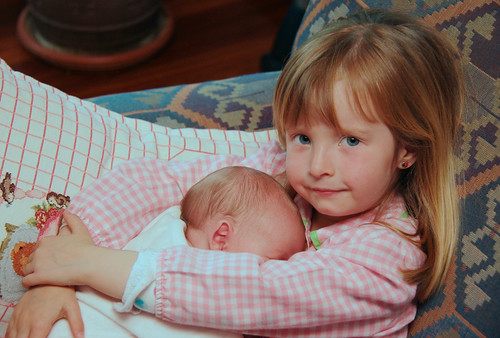