It's really hard to believe, but my daughter is already finishing her first school year. Like in the States, school isn't mandatory until age six, but study after study shows nothing but advantages of a good preschool education. For a post she's preparing, my blogrollmate, the very popular Kaley, from Y Mucho Más, asked me for an interview about my experiences in the Spanish education system. Her questions were excellent, and it felt sort of like an exit interview after this first year.

What sort of schools did you have to choose from?

In my small town of 7,000 people, there are four public schools at distances of 100, 500, 1000, and 1200 meters from our house. The second and fourth of those are pre-school only, funneling into the other two for primaria, what Americans call "elementary school". The second closest school attracts a lot of students by claiming to be bilingual. When I visited and spoke to their principal about possibly taking my daughter there last year (they're the only preschool that starts at 2 rather than 3 years old), he proudly announced that his students learn words like "yellow" and "big". Since my two year old was already speaking entire grammatically correct compound sentences in both English and Spanish, it wasn't much of a draw for us, but it might have been if they were promising a different language.

The other option would be to take her to a private Catholic school in a neighboring town, but my daughter hates riding in the car, and my wife and I live a lifestyle where we rarely use our car, so that was not very appealing.

What were your criteria?

We didn't have many criteria beyond it being easy to take her to school, so the further schools weren't very attractive at all. Plus, the nearby school – It's literally across the street! – came highly recommended by everyone in our neighborhood. My local grocery store is run by a family of siblings that all went to that school and send their children there. When I went to speak to the administrator there, the word he kept using to describe his school was the Spanish familiar, meaning "like a family". The older kids know and care for the younger kids, and since everyone lives in the neighborhood, your kid already knows all the kids playing on the swings on Saturday, etc. It really was a no-brainer. 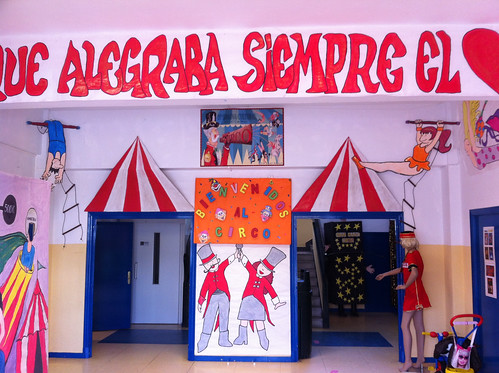 My daughter's school's decoration for a circus themed semester.

What were their criteria? Was there some sort of points system? 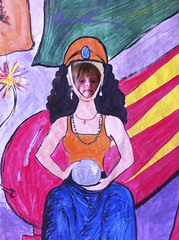 Yes, they did have a points system, but I never learned any of the numerical values. I just knew the order of importance:

How did you apply?

There was an application to fill out: the child's stats, like data of birth, both parents' employers addresses, land and mobile phone numbers, a passport photo, whether or not you planned on leaving the kid at school for lunch, etc. We had to include a certificado de empadronamiento (town registry certificate) as proof of residence, and optionally last year's tax returns if we thought it was going to come down to that.

How do they let you know if you got in? 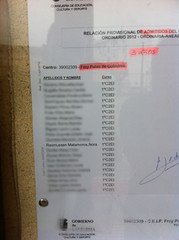 A list was posted outside the school. A friend of mine even photographed it and sent me this picture before I saw it.

We were pretty confident that our proximity to the school would win us a place, but that didn't stop us from being quite nervous. At first they said there were only 20 spots, and then we heard 21, and in the end they accepted 25 kids, one of whom chose another school before the school year started, leaving 24 kids in my daughter's class. I don't know of a single person who wanted to get in and didn't.

I still can't comprehend how one teacher – or even two or three! – can manage two dozen little preschoolers at once, but it sure seems like they manage. That's professionalism!

What are the costs of educación infantil? How do they compare to the US (if you know)?

We're not paying a dime, because my daughter comes home every day for lunch. The kids that do stay for lunch (18 of the 24) pay what seems to me to be an exorbitant sum of 4.50€ / day for lunch. It's provided by a private catering company that won the contract with the local government. Considering that we have restaurants in town that will serve two enormous courses, plus dessert, with unlimited bread, wine and water for only 8€, the 4.50€ for a bowl of lentils and a yoghurt seems steep. 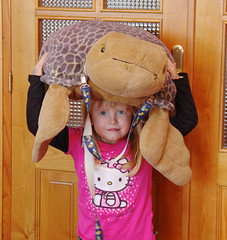 Actually, I lied, we do have expenses. Every day one student in the class gets to be the encargado (the class manager), which comes with such responsibilities as being first in the line to enter and leave school, "reading" (with a list of mugshots) role call, reciting the class rules (no hitting, shouting, pushing; put everything back in its place when you're done with it; etc.), ringing a bell to announce that it's time for morning fruit, and then passing out the fruit to everybody. For the children, this is a huge honor that is looked forward to. The night before your child is the encargado, she brings home the class mascot, a stuffed turtle, and a canvas bag that needs to be returned the following morning full of two apples, two bananas, and two pears for the morning fruit snack the next day. So my daughter's school is costing us about 2€ every 24th day, or 0.08€ a day. Okay, so I guess that is a dime!

When I went to elementary school, our school lunch cost about $1.25, I think, which an online inflation calculator – a.k.a. The Make You Feel Old Engine – puts at $2.65 in 2013 dollars, or 2€. Just like in the States, the poorer Spanish children have their school meals subsidized, but I don't know by how much.

Are you happy with the school now that the end of the year is nearing?

We are absolutely delighted. My daughter's teacher is an enchanting woman who manages to be both extremely loved and respected by her students. I don't know how she does it. And we're lucky, because the school policy is that the preschoolers stay with the same teacher for all three years of preschool before they start primaria at age six. Plus it seems like my daughter's school goes over and above when it comes to decorating and organizing events and crafts and things. My expectations are consistently surpassed.

The convenience of having the school so close is also a godsend. We literally leave our house three to four minutes before the bell rings and have plenty of time.

I don't regret our choice at all. 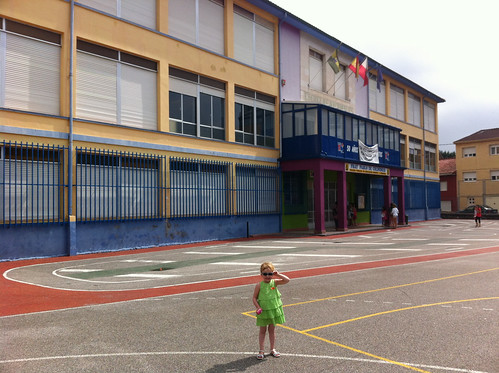