Several months ago, amongst random meandering thoughts, I realized that there would be a day this year that would match three consecutive numbers on the Fibonacci sequence. For those of you who can't remember your math teacher's face, the Fibonacci sequence is the sequence of numbers that starts with 0 and 1, and creates each number in the sequence by summing the previous two. So it goes: 0, 1, 1, 2, 3, 5, 8, 13, 21, 34, 55, 89… You may notice that three of those numbers are 5, 8, and 13, which are today's date. In the United States and nowhere else. Anyway, this sequence is important throughout mathematics, including the awesomeness of the Golden Ratio and its surprising, but not so surprising when you think about it, occurrence in Nature. As a veteran of the internet – I remember telnet, gopher and when you had to capitalize Internet, as if it were a deity – and a regular social network surfer, I had some inclination of the type of nerdiness that is ripe for viral distribution. As I've mentioned before, people really like sharing things that some percentage of their followers are too stupid to understand, so as to broadcast the cleverness of the sharer. That's why I intentionally left the explanation out of the image I submitted.

While a nerdy post such as this won't have the broad "unwashed masses" appeal as, say, Grumpy Cat or laughing babies, it does have that special egotistical boasting impetus for sharing that I mentioned above, which the others do not. 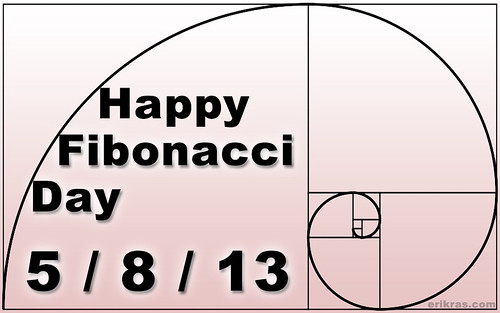 As I mentioned, I had the idea for the meme several months ago, but I created the image several days in advance. It took me well under ten minutes, most of which was spent searching the web for a suitable golden spiral to rip off. Then it was a matter of throwing some text on it in Photoshop with some outer glow and drop shadow, and an "erikras.com" watermark to prove it was mine, and we were good to go. It's my firm belief that gradients are naturally more pleasing to us because that is how we see objects in nature. I'm not sure why I chose pink, but I did.

Unfortunately, in my haste, I forgot to copy the outer glow and drop shadow effect to the word "Happy". Oh well. Don't they say that the master painters deliberately left errors to prove the originality of their works? Or have I been watching too much White Collar?

I had to set a reminder so I wouldn't forget to publish the image at 11pm Spanish time the day before. I'd miss the Asian audience, but the date format used was clearly targeted for Americans. As expected, my first comments were from my pedant friends moaning (as would I) about the idiocy of the American date format. ¡Viva la ISO 8601!

I must admit, and I apologize to those I underestimated for this, that I was surprised the prime delivery vehicle for the meme was Tumblr. It turns out that with some specific tags on a Tumblr post, you can really gain some traction. And with enough people linking Tumblr to their Twitter account, as I do, and often use, it will leak over to Twitter as well. I underestimated the popularity of Tumblr. The ease of sharing media such as images and video, and the lowered expectation of not being "a real blog", with demands for more elaborate content, greatly facilitates the spread of bite-sized awesomeness through Tumblr.

The numbers, as they stand as of 11pm, Central European Time, 24 hours before I posted the meme, are:

120 shares of my original Facebook image, 4250 notes (rebloggings and likes) of my original image on Tumblr, and many, many (how to count?) references to Fibonacci Day on Twitter. Not all of the Twitter references are due to my work, but a fairly big percentage are. Surely some number of nerds would've recognized this pattern on their own and created a stir, but it's hard to tell. Many of the most referenced pages do have my image. That's the thing about image memes, is that there is no way to get good analytics about the depth of social penetration, what with all the copying to Instagram, pic.twitter.com, and Facebook. The latter alone has well over 4,500 shares.

So why do it? Well, it's fun, first of all, but I won't deny there's a sense of "15 minutes of fame" akin to having your photo in the local paper, where you can claim that, for a brief moment, a whole bunch of people read your name and became briefly aware of your existence. For damn sure, it's not for the web traffic, because I've had absolutely zero spike in web page hits of people curious enough to type in the url watermarked at the bottom of the image. Were I to attempt something like this again, with a monetary, real viral marketing, objective, I'd put a more substantial "Come check out Erik's Rugs and Carpets" message on the image. There's no way to keep people from copying it, so unless you achieve the ultimate internet domination of getting invited to The Today Show, like whoever owns Grumpy Cat did (see, I don't even know her name), then you're not really gaining anything beyond ego stroking.

But then, sometimes the ego needs a little fondling…