Somewhere around her second trimester, my wife calculated that if she could hold out until her due date of April 25th, then her maternity leave would butt right up against a five day weekend in August, created by a national holiday and a local holiday and a puente. We had a minor scare a fortnight early, but she made it...right up to midnight on April 25th, when her labor began. She let me sleep an hour from 12:30 to 1:30 before waking me and telling me to go downstairs and clean up some dishes and crumbs from dinner the night before to make the house tidy for our guest who we were about to call. We both showered, and I shaved, and we called Nela, the woman who was Nora's favorite day care worker until she left to open a children's clothing store in town a year ago. They've lost a bit of intimacy when they meet in the street, but Nora knows and still loves Nela, so she was our pick among the various offers we had for the midnight hospital run post. Nela showed up more or less immediately and by then I was having to give Marga kidney massages during her contractions, which were about four minutes apart. We laid out some clothes and told Nela what Nora usually has for breakfast, and we were off.

At the ER, the only door to the hospital that was unlocked, they took Marga's socialized medicine number and plopped her down in a wheelchair. The maternity ward was summoned and they sent someone down to wheel her up to the second floor. The last time we were there, there were a half dozen other women pushing babies out of their vaginas, and we got largely ignored for many hours and told, "you're still green" (in the fruit ripening sense). This time, not only were we about to fall off the vine, but the ward was empty, and we had the midwife's attention all to ourselves.

After a series of technical glitches that had the nurses shuffling between three or four different monitoring machines, each easy to place on the Progress line from analog to digital, they finally had the data they needed to give the go ahead for the epidural. To prepare, she had to take off all her jewelry, and they brought out a big industrial bottle of acetate to remove the nail polish she'd spent an hour carefully applying that morning. Then Marga's favorite hospital employee showed up, the anesthesiologist, who Marga calls The Candyman. He went though three different syringe-depressing machines before he found one that worked, and the sweet bliss of anesthesia descended upon the room.

The midwife impressed me very much. She actually spoke some English after adopting a hobby of going on weeklong dawn-to-dusk intensive English camps where Spaniards pay to stay with a bunch of Americans who have their room and board (but not travel to Spain) paid for and they spend all day talking. The midwife did a pretty good job of explaining everything. The parts that most stuck with me were how Marga had to have her legs out of balance, one extended and one bent, to keep her pelvis twisted, and therefore more open, and how the baby comes out face down and then twists out "like a screw". I managed to block the quip, "Screwing is how we got here!" on its way from my adolescent wordplay neurons to my mouth.

Over the course of an hour the contractions slowly crescendoed. Marga reported a strong desire to push, and the midwife said, "Then push! If he comes out, we'll catch him." Around 5:10 we were moved to the paritorio, the birthing room, this one had a huge photo of the moon on one wall, apt for our full moon birth. Somehow she got moved, between contractions, to another bed with stirrups. Then the real pain began.

Marga switches to Basque when she's really hurting. Once I had to be reminded that I was the hand squeezee, not the squeezer. The midwife invited me to lean over to the other end and said that the head was barely showing. I nodded, but it wasn't clear. But then it started to come out! First the head came all the way out, and then, with a quarter turn, the shoulders appears, and with another push he slid all the way out. He took his first breath and let out a little cry before he was all the way out. It was incredible watching one human coming out of another. He was immediately placed on his very relieved mother's chest, and we got to meet our son for the first time. He looked so healthy and perfect, I broke down in tears. 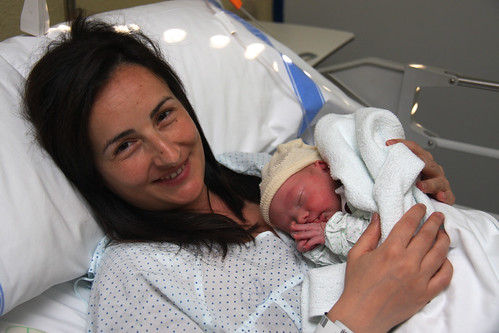 He was born at 5:35 AM on April 25, 2013, measuring 3.3 kg and 51 cm. I got to cut the umbilical cord, and was proud of myself for not being too grossed out by seeing the placenta come out and be held up for us to examine. Unlike his sister, he was immediately interested in suckling and latched on on the first try, a sensation unknown to his mother. 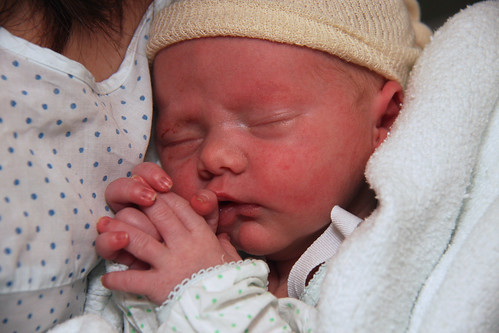 We called the Spanish family, and when they showed up a few hours later, I went home to take a 4.5 hour nap, while Nora's Spanish grandparents and aunt got her from school, fed her lunch, and took her back to school. When Nora got out of school we took her to meet her baby brother for the first time. She was absolutely delighted. I caught their first encounter on camera for them to enjoy for the rest of their lives.

Our newest family member spent his first day mostly sleeping, and his first night fairly awake. He drained both breasts and still wanted more. We called the night shift lactation nurse, who is a long haired young man, and he suggested that, "You really need the stimulus he's giving you for your uterus to reposition itself and for the milk to start flowing. Still guilty from making Nora go hungry the first night, we told him that several hours of sucking was enough stimulus and he wasn't getting any milk and to please give us some milk. He complied and we fed our babe a full syringe of milk until he was satiated.

In Spain, the mother and baby have to stay at the hospital for a minimum of 48 hours, which we did, and when no further complications presented themselves, we were released. Upon arriving home, we found a message that Nora had dictated, word for word, to her aunt for her baby brother. It was pretty adorable. 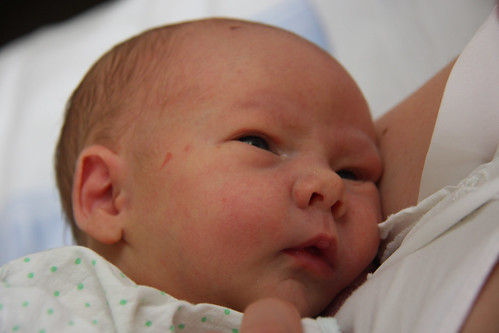 Welcome to the world, Ian Rasmussen Matamoros. Our family is now complete. 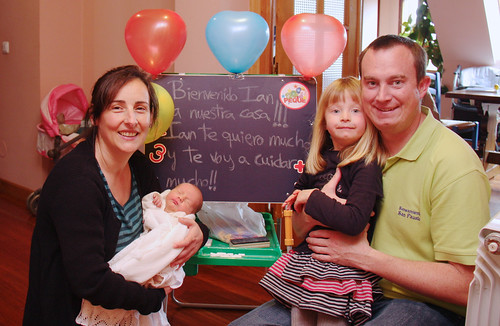