This past weekend, I found myself thinking about two very different kinds of knights, one that seems very old from thirty years ago, and some others from several centuries ago. Both coincided with a visit from my cousin Jeanie and her husband Kit. It's rare that two anecdotes I have to share align with a common word, but in this case, I've got two stories of knights to tell you, and both have to do with quirks of Spanish history.

During my cousin's recent visit, my Spanish family had to ask a couple times to be reminded of Jeanie's name, but not of her husband's. As soon as I told them his name was Kit, every one of them said, "Oh! Like El Coche Fantástico!" That is the name of the 1980's television series, Knight Rider, as it was marketed in Spain.

When I told Kit, he had the reaction most Americans would, saying, "Yeah, I think I sort of remember a show like that…but what does it have to do with my name?" (The sentient car's name was KITT.) You see, Knight Rider is hugely popular in Spain, even to the point of there being syndicated episodes shown even today. I never really understood their fascination with this very mediocre horribly-lame-in-hindsight television program, but I've now developed a hypothesis.

I think that the early 1980's, still in the fledgling democracy after Franco's rule, was the first time that an American television company – NBC, in this case – licensed an American television program for overdubbing and rebroadcasting in Spain, which had only two or three channels at that time. In fact, I wouldn't be surprised if Knight Rider was the very first American show broadcast in Spain. The production quality and writing from the experienced Hollywood producers would've blown Spain away. That's my hypothesis, anyway.

Don't ask me to explain how Hasselhoff can be a pop star in Germany.

During our walk in Laredo with Jeanie and Kit and my in-laws, we came across a very curious sight. Outside of a major community center building, it looked at first glance to be a wedding: a bunch of people standing outside a building dressed very elegantly clearly waiting to either enter the building or for someone important to come out. But as we approached, things got curiouser and curiouser. Some of the men were wearing full white robes from their collars to their feet, which draped about them like capes. Some of the other men wore intricate sashes with an important-looking embroidered coat of arms. Some of the women were dressed in all black with high lace collars towering over the back of their heads. Kit and I were bouncing hypotheses off each other and our initial instinct was that this some some Masonic society. The ornamentation was very special, meant to clearly distinguish members from non-members. This was clearly a brotherhood of some kind.

Finally, my curiosity overcame my shyness and I walked up to one of the guys standing there on the street and I gestured to the crowd and inquired, "What is this?" He seemed quite happy to explain it to me. They were the Caballeros de Yuste, defenders of the Catholic Faith, a monastic order of knights, over four hundred years old, with over two thousand members worldwide. What I was witnessing was the end of an induction ceremony, bringing new monks into the order. Pretty crazy. The local newspaper covered the event and they have more photos.

I had never seen a knight before. They all seemed to be septuagenarians that I could probably defeat in a sword fight, but I suspect most of what they do now to "defend the Catholic faith" is throw expensive fundraisers and lobby legislators. 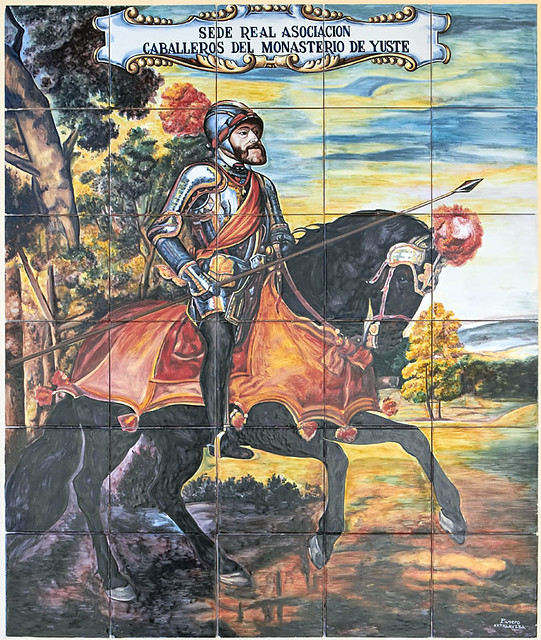