For five weeks, we tracked every day on a calendar to know when it would be Nora's birthday. Also on the calendar was the arrival of my parents for their fortnight Easter visit. Nora was pretty excited about turning four, although she didn't really comprehend that she would be receiving presents. Even on the day, I had to remind her that it was time to open presents. Her Spanish grandparents and aunt came to visit for her birthday, so she had all her most immediate blood relatives with her. There was something about the combination of all the family that made her a bit grumpy in the morning. She refused to speak on the phone to the handful of callers that called to wish her a happy birthday. I commented that one day I'd had a three year old, and now I had a fourteen year old. When it came time for cake and presents, however, things livened up.

My parents got her the one thing she's been responding to "What do you want for your birthday?", which was a Dora The Explorer purse, with things inside! Inside she found some cinnamon chewing gum (a bit of a rarity here in Iberia), some Hello Kitty bandaids and a little flashlight just like her Grandma's, with which they enter dark closets to play "cave". From her Aunt Belén, she received a little basket of Hello Kitty branded perfume and chapstick. Nora is more than a bit of a brand diva. From her abuelos, she received a combination chalkboard/whiteboard, which she loves. As my wife pointed out, it will get a lot more use than some of her other toys because, you know, it's actually kind of fun for adults to play with. Her other big gift was a brilliant idea of

Nora is more than a bit of a brand diva.

her mother's, a nice new doll stroller. Since we're about to dust off our real stroller and go for walks with it, it's a certainty that Nora will want to mimic that behavior with her own stroller, and the ones she's had since the time she was just learning how to walk are all either broken or too small. It hasn't gotten lot of play yet at home, but it will do its kilometers this summer. 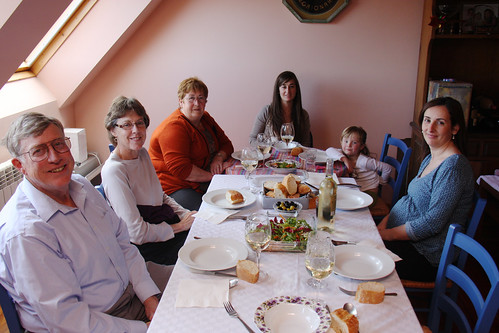 The cake was imported that morning from the Basque Country, and says "Zorionak Nora", meaning "Congratulations Nora". 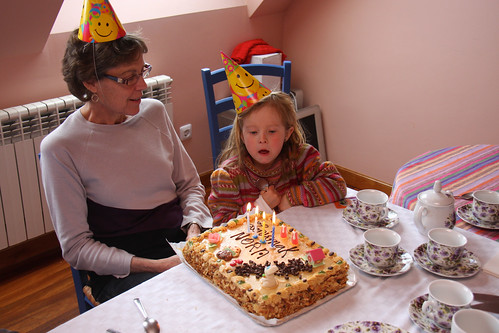 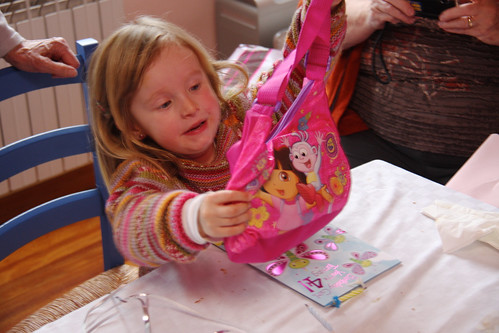 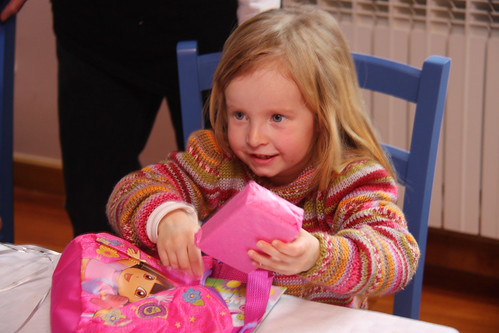 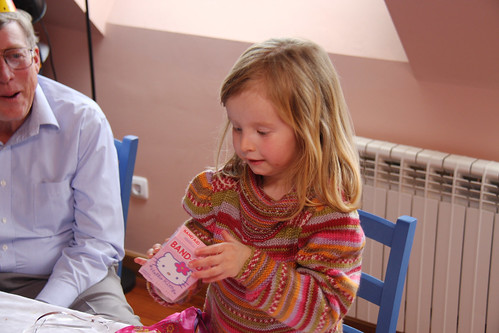 Hello Kitty bandaids, for dealing with owies in style. 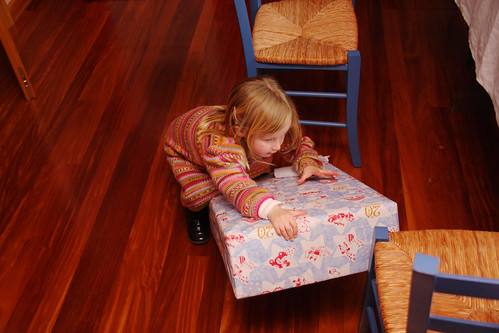 Some of the presents were big! 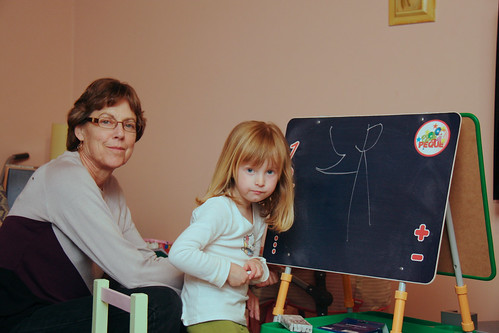 Writing…um…the equation for the circumference of a circle divided by Ï€.

Depicting how strings are curled up in the extra dimensions.

It was a wonderful day shared with family. The past four years have been so much fun.

Happy birthday to my favorite little girl. Your mother and I are so proud of you.