One of the most enjoyable parts about parenting for me is being surprised by my child; expecting her to react one way or favor one thing, and seeing her preference clearly buck my expectations. Take, for example, toys. She's got dolls and stuffed animals and cars and computers and costumes, some of which are very elaborate. But, contrary to what I would've expected, none of them are her most favorite possessions. She really loves playing with small pieces of plastic, items that she can hold firmly in her fist and carry in her pocket, like a tube of Chapstickâ„¢ or a piece of plastic shrapnel that broke off her mother's hairbrush. But her most favorite possession of all is her "iPhone". We think she actually stole it from her classroom at school. We've made her take it back a few times, but it always ends up back at home. She hasn't yet stolen anything else, and I don't think anyone at school misses it, so we're letting this one go as an isolated incident. I think it's supposed to be a baby's teething ring. It had been around, in her possession, for a couple weeks before she dubbed it her "iPhone". Not her "mobile", mind you, not her "telephone"…her "iPhone". She likes to make sure she has it in her coat pocket before going to school and sometimes can be found searching the house frantically for it. 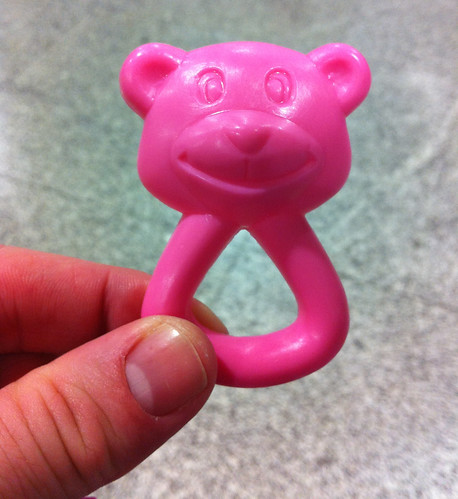 The other day when we were at the doctor's waiting room, I pulled out my iPhone and was thumbing aimlessly around social networking posts and emails as my generation can be seen doing at the first sign of boredom. Out of the corner of my eye, I saw Nora, beside me, pull out her "iPhone", hold it in front of her, and thumb across its surface just like I was doing with my thumb. I asked what she was doing, and she said, "Just using my iPhone." I smiled.

A minute later she asked me, "Do you want me to take your picture?" I consented, and she got up and moved in front of me, held up her "iPhone" and, moving her thumb to exactly where the shutter button would be on a real iPhone, she tapped. She brought it back to me to show me the pretend picture.

But it didn't stop there.

She went on to give me a tutorial on how to use her pink bear of a smart phone, identifying the eyes, ears and nose as different apps, and explained that if you wanted to see pictures, for example, you had to tap here, here, and then here. To use the drawing app required another set of procedures. I was astounded.

Looking back, her behavior is pretty understandable. It's nice to have personal possessions that you can claim as your own, and it's nice when they fit in your pocket. Her mimicry of my personal obsession is a little haunting, but I admit to being every bit as nutty about "needing" my iPhone with me at all times.

The depth and texture and detail of a child's imagination sure is a beautiful thing.