88% of people don't understand this post… (but you probably will)

If you frequent Facebook much, you may have noticed a recent surge – or scourge – of silly little intelligence tests. Most of them start out with a claim that "Most people are unable to do this", and then provide a pretty simple single-digits arithmetic problem or a word find or ask you to count geometric shapes. These things are so successful, especially with the prefacing text, because they reassure the common believe that everyone has, that they are smarter than most of these other Homo sapiens bozos. I'll be the first to admit that they can be pretty fun, and some of them do engage your mind in a way that a silly cat photo does not. Here, try to resist some that I culled in no time at all from my Facebook news feed… 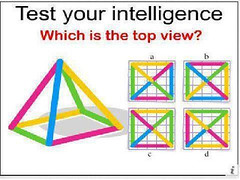 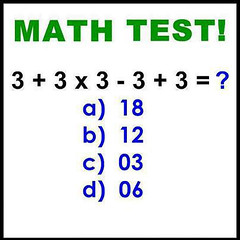 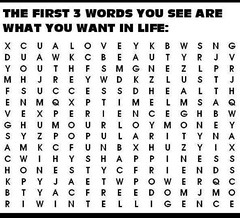 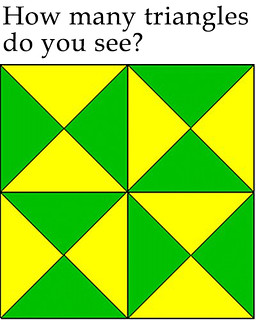 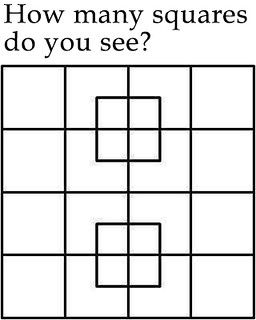 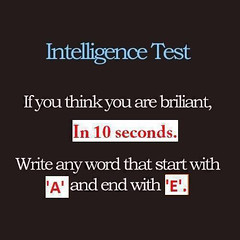 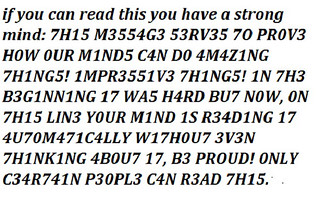 Perhaps it was my training as a computer programmer, but I had the arithmetic order of operations hammered into my brain permanently, so those seem the downright silliest to me. The more recent mutation of this social virus is the "Name a word/town/celebrity with/without the following letters". Meh! The word find ones are also totally daft, as the only hidden words are things that everyone 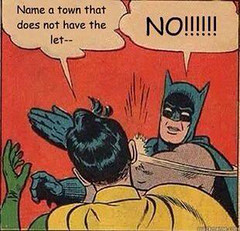 "wants in life" (read horoscopes, much?). It also turns out that everyone can read the "jumbled" leetspeak text, too. Look how clever you are! The geometric shape counting variety are my favorite, as they take a reasonable amount of observation and short-term memory; they are the kind I most often see people get wrong – and yes, get wrong myself.

The thing about these images is that they are really hard not to respond to, especially when you see a long list of comments from people giving the wrong answers. In me, at least, it fires the same "Oh, I know this!" neurons that used to be tied to my hand raising muscles back in school.

But Why Does It Matter?

Facebook and Google have very similar business models and problems to solve. Both have a ton of data that they need to filter down to a quantity that you, their user, finds manageable. The better they can do that to your liking, the more you use their site, and the more advertisements they can show you.

Google uses an algorithm known as PageRank to calculate how authoritative or generally important a given webpage is by how many other websites link to it. There's a huge industry, called Search Engine Optimization, devoted to maximizing your PageRank to make your website show up higher on Google search results. Although you may not be aware of it, the internet is in a constant arms race to find ways to gain PageRank without actually having to have amazingly useful content. SEO hackers find a way to work around the PageRank algorithm, and Google plugs each hole as they find it.

Likewise, Facebook uses an algorithm called EdgeRank, which uses what they call User Engagement to decide what content to display on your newsfeed. Some Facebook users have "liked" hundreds of pages (websites or brands) which gives those pages access to post things onto their newsfeed. Facebook quickly realized that this would be a "drinking from the firehose" problem and had to filter the content down to only pages that you really seemed to care about. Like PageRank, the exact inner workings of the EdgeRank algorithm are a corporate secret, but they generally measure the following interactions with a Facebook post in increasing order of importance: Like, Comment, Share. The more you do those things on, say, the American in Spain page, the more likely it is that you – and other people! – will see subsequent posts. If you fail to interact with the posts from a page, you will cease to see them in your newsfeed. Thus, it is extremely valuable to a page owner that people like, comment and share their posts.

Now, if you're one of the elite 12% who can comprehend such intellectual matters, I think you'll see why these silly little "intelligence" tests are so incredibly popular. Page owners have found a way to get lots of people to comment on their posts, thus boosting their overall reach into the Facebook-verse.

Unless Facebook finds some way to plug this hole (e.g. giving lower weight to single word comments), those of us who use Facebook will be seeing a lot more of these kinds of posts in the future.

Were you one of the super-geniuses that could understand this post? Why not challenge your friends by liking or sharing this post?? I bet they're totally dumber than you.