State of the Offspring Address - February 2013

Nora has always had a bit of anxiety associated with bedtime. When she was sleeping in her crib and could speak enough to request it, she demanded that I hold her hand, through the crib bars, as she fell asleep. Trying to escape from someone's grasp and sneak out of the pitch black room as they slowly lose consciousness is an interesting game. I would've preferred to do more parental negotiating in this area, my wife's schedule means that she has to get up very early in the morning, so I often had to do whatever kept her quiet. I did, however, manage over the course of months to only promise to sit down outside her door as she fell asleep, allowing for smoother getaways. Over the past few months, we took some steps backwards on this issue. There were a couple nights where Nora got up six or seven times to come into our bedroom to ask me to tuck her back into bed and complain that she'd specifically asked me, hours earlier at her bedtime, for me to "sit down and not go away" from outside her door. Since Nora's 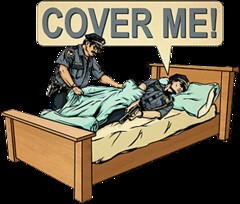 room is also our guest bedroom, in desperation to get some sleep, after about the seventh visit, I just went to sleep in her room. Then the following night she asked if I was going to sleep in her room again. When I said no, she began to cry and complain, and, it being late with her pregnant mother needing to sleep, I had to give in. Some parents might have lied, saying they'd sleep in the same room as their child, but then really not, but I can't bring myself to break promises to my child like that; if I tell her I'll do something, I'll do it. With the pregnancy, sleep became even more important for my wife, so we decided not to fight this battle anymore until our son is born, and I've been sleeping in my daughter's room for the past few months.

A couple weeks ago, Nora brought home a paper from school, as she often does, informing us of upcoming school events, etc. This paper was titled "Habits of Autonomy"; it was a list of activities that a child Nora's age should be able to do on her own. My wife did an excellent theatrical reading of the list as if she'd just brought stone tablets down from Mount Sinai. The list included getting dressed and undressed, brushing teeth, eating with utensils, and drawing, as well as a four point plan for implementing each item: 1) Decide, 2) Explain, 3) Practice, 4) Supervise. Many of them Nora already did regularly, but then, at the end of the list, came the big one: dormir solo.

We asked Nora if she wanted to sleep all by herself like The Paper From Viky (her teacher) had dictated, and after considering it for a few seconds, much to our surprise, she said that she did. We promised an ice cream the following day if she did. That night, she put on her pajamas much more autonomously than ever before and said that she wanted to sleep alone. And sure enough, she did! She got her ice cream the next morning, and has slept alone ever since. Needless to say, we're thrilled. 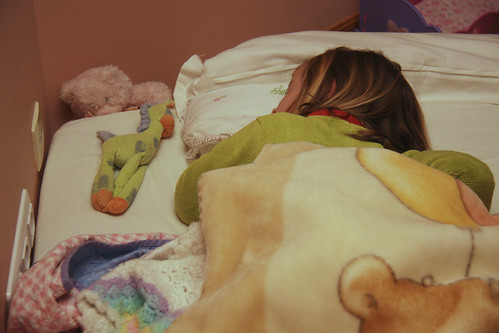 Looking back on the whole saga, I don't think we could've just produced any old paper and reverently read a set of rules. It was really important that the list had come from her beloved and authority-respected teacher. Still, we might have to remember this trick for making future behavioral 180Â° turns.

One day Nora and I were having our discussion we have several times a day about how sometimes you can't have what you want right this instant, and I became aware that I was volleying my counterarguments back to her with the phrase, "Yeah, but…". I'm pretty sure that this isn't a regular verbal tic of mine, but it was just something I was doing during that one argument. Somehow it really made an impression on Nora, because for the past few weeks, anytime she wants to rebut an argument, she says "Yeah, but…" She even does it in Spanish, with a "Yeah, pero…", which doesn't sound as out-of-place as you might think, because Spaniards do sometimes use an anglo-germanic "ya" expression in such cases. 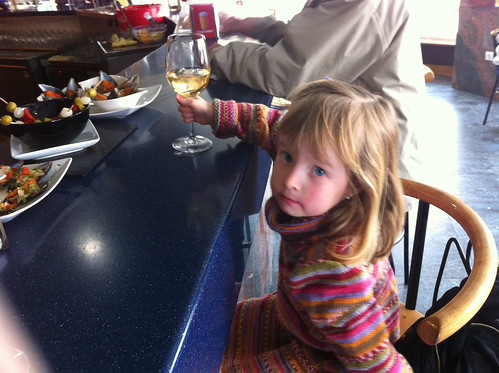 She and I share a common passion for the Spanish pastime of drinking and snacking in bars.

Perhaps we've been a bit negligent on the topic of reading and writing, but Nora's never really shown much interest or understanding as we point to words and sound them out. However, this month, she's started pointing to letters and saying someone's name that starts with that letter. Apparently they have photos of the kids in her class assigned to each letter on a bulletin board or something. Then she started saying, "I can draw that letter!" So we gave her some paper, and sure enough, she can pretty closely approximate some capital letters. 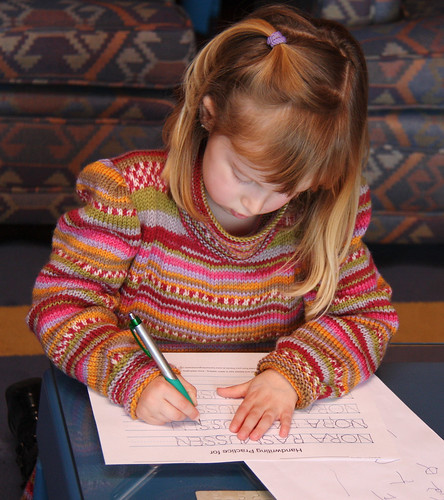 Not too surprisingly, it took me about thirty seconds to find a web site that would let me print out letter writing worksheets with whatever text I wanted. We've been heaping praise upon her when she does well with these, and other, worksheets, so she's pretty excited about the whole thing. 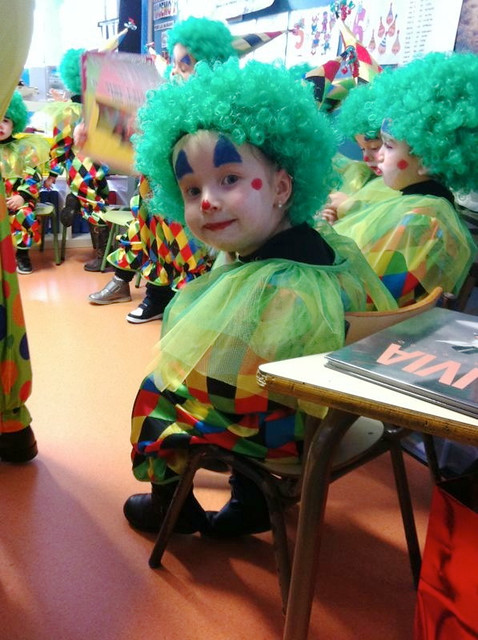