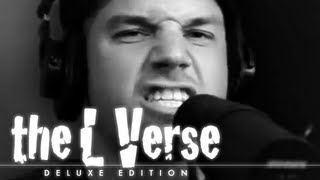 Normally, I try not to blog about my gangsta days in Los Angeles or all the rival gang members I popped caps in, but every so often one of my homies from da 'Hood calls me up to provide cameo cred to a rising rap star, and I take the private jet back to my L.A. stomping grounds. Snoop and I are still pretty tight, but I had a falling out with Jay-Z after Beyoncé found me a bit too fetching. You know how it is… Was that White Boy enough for you? The truth is that I really am in a rap video. One of my never-met-in-person internet friends, a guy that used to comment around this blog occasionally, sent me a Facebook message this morning asking me if it was really me in this rap video he was apparently watching. This video really is rubbish, but I can't judge, because I often watch some pretty embarrassing stuff on YouTube. It's not so much a rap song as a list of words read out in rhythm. Normally rap songs have some semblance of subject-verb grammar agreement, but this is just a list…of English words that begin with the letter L.

Warning, ladies! My appearance in this video is quite provocative. I appear around the 1:42 mark. Be prepared to swoon.

It is slightly annoying that this Epic Lloyd guy didn't at least seek a little permission to use my photograph. I'm normally pretty helpful when such requests come in, and I probably would've given him permission. It's also a bit ironic, given my life story, that the word chosen, for which my photograph was used, was "leer", which is a much more common word in Spanish – meaning: to read – than in English. An image search for it returns little more than books or people reading. Somehow – search for "leering"? – my photo was located and deemed appropriate enough.

The really odd thing about this is that the chances of an internet friend I've never met happening upon this video and recognizing a practically subliminal image of my sexy mug seems extremely rare. This leads me to conclude that, for someone who shares as much photography as I do, there are probably many, many more videos, or other forms of art, that use my work without permission than I will ever find and that will never credit me.

It's also a bit creepy that the 100,000+ viewers (in the first month!) of this video have seen me leering at them, if only for a split second.