Last week I took my annual golf vacation to Myrtle Beach, South Carolina, to participate in the Myrtle Beach Classic, a golf competition among good friends that my father organizes every year in February. Since I started going in 2004, I've only missed one year (2011). Sadly, my good friend Jacob couldn't make it this year, as he was called off on a business trip to Singapore. Careers can be so annoying sometimes! Despite his absence, fun was had, golf was played, music was made, and trophies were awarded. 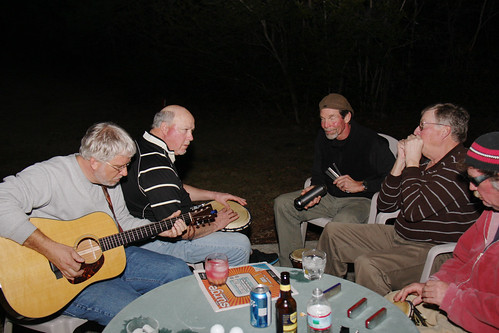 One of the best times of this annual trip is when we break out the guitars, harmonicas and percussion instruments and jam into the night. 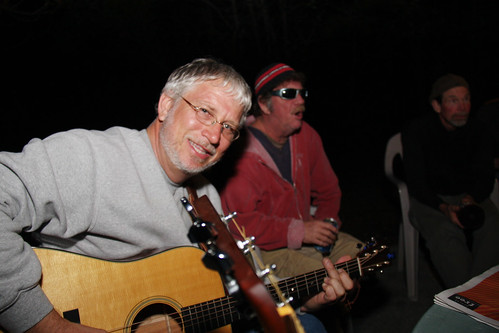 Phil is the actual musician of the group, leading us on blues, country and rock songs. 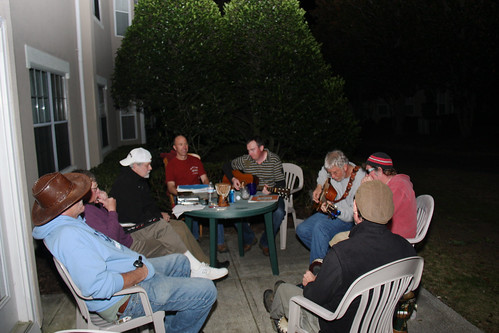 I know just enough guitar and music theory to follow Phil's chords and play up and down some scales in the right key. 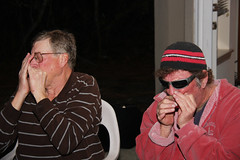 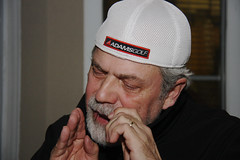 Paul, Al and Dennis play some pretty mean blues harmonica, and Dennis even plays the bizarre Jew's harp, one of the oldest instruments in the world. 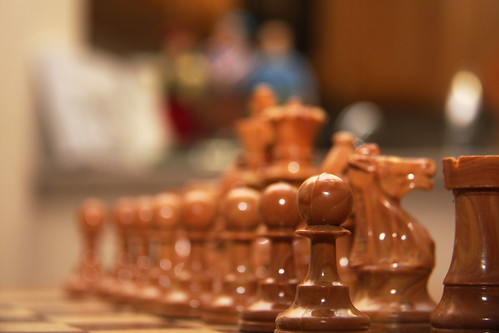 We even play chess. I played a match against Steve Hemphill, who claimed to not really know the game very well, "accidentally" moving his pawn illegally on his second move. This led me to let my guard down a bit and he ended up going ahead by several pieces, not falling for some traps a real amateur would have. I managed to hold him off until we just had kings and pawns, and apparently he didn't know that pawns could be turned into other pieces – "Like in checkers?" he asked – and I got a queen and won.

Now, on to the golf!

We played all four days at the Legends Golf & Resort. On the Thursday practice round, we played the Moorland course, but we played it from the White tees, and it was very long and difficult. Many of the par fours were unreachable and our scores were very high. I did so poorly (a 25-over, 97), in fact, that it boosted my handicap for the final three days from 15 up to 17. We played from the Green tees for the rest of the tournament.

Although it often didn't feel like it, I played quite well the next two days, leading the pack both days. And then came…

The Final Round - Championship Flight Showdown

On Myrtle Beach Sunday, I was leading the Championship flight. I was two ahead of Jeff and four ahead of Keith and Steve. Jeff and I both had the same idea, to go ahead and award Jeff his four stroke handicap difference over me, putting him two strokes ahead even up. Keith was seven behind me, and Steve would have to make up eleven strokes to overtake me. When Keith three putt most of the holes on the front nine, and Steve lost a ball or two, it became clear that the Championship flight was a two man race.

After I parred the first hole to Jeff's double bogey, we were tied.

After the front nine, we were tied. 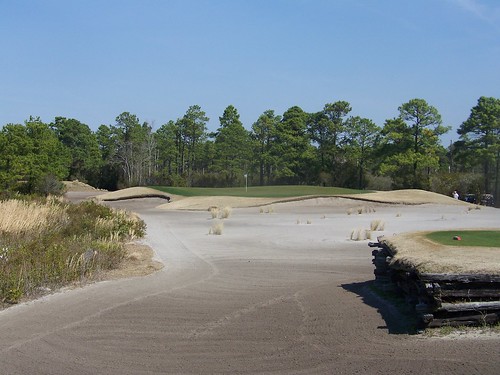 On the 17th tee, I said to him, "I've got you right where I want you." The 17th at Moorland is a par three with a waste area carry and a bunker around to the left of the green. I hit my seven iron, plenty of club to clear the nasty stuff, but it drew a little bit, landing pin high on the left fringe and, much to my dismay, rolled left and down into the trap. It wasn't looking good for team Erik. Jeff teed off next, and his high eight iron did exactly what mine had done, ending up two feet from my ball in the bunker.

Jeff was slightly away and said he could manage a stance without stepping on my ball, so he went first. He caught all ball and his ball sailed over the green and towards the forest waste area on the opposite side of the green, pushed on by Jeff's rhyming ejaculation involving water fowl. Steve and Keith went immediately to look for Jeff's ball, and Jeff climbed out of the bunker to look too, leaving me all alone in the sand, watched only by The Committee – a loving nickname we give to my father, who organizes and referees the tournament every year – waiting back on the tee.

Terrified that I might repeat Jeff's mistake, an error every golfer knows the horror of (I had done it on the previous hole, even), I caught a little too much sand, and the ball went up to where it had originally landed on the fringe and rolled back down into the trap. Grrr!! I really needed that par!

My second attempt was much better. The ball flew just over the hole, landing about five feet away and rolling to about six feet. It came to a stop and, to my amazement, started rolling back towards the hole. I waved frantically at it, with "Come on back, baby!" coaxing. It finally stopped about 15 inches from the cup.

As I finished raking, Jeff came back with news of a lost ball – stroke and distance – which I knew from his gait before he told me. He saw my ball next to the flag and groaned. "It took me two to get out," I confessed. I marked my ball and Jeff dropped his back in the bunker; he was now lying three.

He did the same thing I did the first time, just barely not getting out. Now he's lying four. His third bunker shot was a lot better, but didn't get the lucky roll on the green that mine had. Lying five. His first putt stopped two feet from the hole, and, still flustered from the lost ball, he missed the second one, three putting for an eight. I sunk my short putt for the bogey four.

I had checked the card a few holes back and knew that if we tied, I would win the scorecard playoff with my par on the first hole. It was an historic Myrtle Beach Classic moment, sports drama worthy of a Hollywood movie...or at least a blog post. 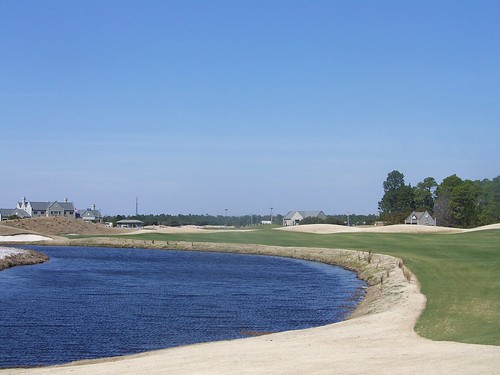 The 18th at Moorland is a daunting dogleg left, with water all down the left side, which you have to drive over, but the hard part is knowing how far left to aim over the water. It's really a lot like the 18th at Pebble Beach in that regard.

Having both parred the 17th, Steve and Keith teed off first, landing safely in the fairway. My drive joined them. Jeff, still hot from losing his four stroke lead, pull hooked his drive into the water. "Well, there you go," he said to me, conceding the match. "It's not over yet," I replied, knowing that he was only lying two up by the water, perfectly capable of getting on the green in four, possibly to make the bogey five, and there was still plenty of danger between my ball and the hole, but his shoulders sunk and he said, "Yeah, it is."

Of course the match wasn't really over until he dropped his ball and slammed it into the water again, now lying four and unable to reach the green. I groaned in empathy for my good friend. I wanted to win by sinking a twenty foot putt for birdie or par, not like this.

I used plenty of club for my approach and my ball rolled just off the back, but I was able to chip up to within three feet and sunk the par. With Jeff's nine, I won the Myrtle Beach Classic Championship flight by five strokes, becoming the only participant in the tournament's fifteen year history to win the title three times. 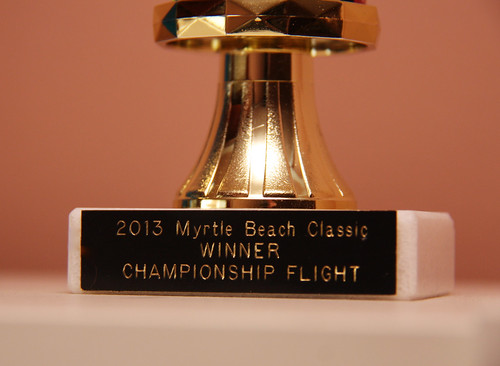