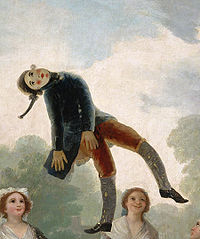 My three-year-old daughter has been instructed by her teacher to bring in some old clothes that no longer fit for the Pelele celebration. According to this Spanish Wikipedia article, the Pelele is a rag doll or straw puppet that is thrown high up into the air by a group of women during the Carnival (Mardi Gras) celebrations in Madrid, while they sing about beating him to death. The doll is later burned. Ritual burnings are common in Europe around the solstices, as an ancient pagan symbol of rebirth. The symbolism of burning your old clothes is pretty straightforwardly similar, however, I suspect that the use of old clothes is more about getting straw into a humanoid shape. The real reason for the doll becomes apparent upon listening to the lyrics of the song. 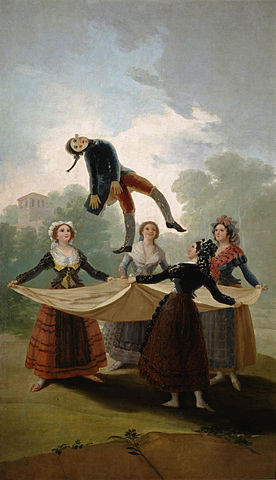 The doll is sick. What should we give him? A beating with sticks. Let's kill him!

The poor doll, the hairy one. He tempts his thing, but it is wrinkly. He touches it with his finger; he wants it to budge. The poor doll wants to die.

The doll is sick. What should we give him? Snail water, he'll get well.

Perhaps the experience is quite fun and cathartic for young women to beat up on a symbolic effigy of erectile dysfunction? For the men, on the other hand, equating impotency with suicidal and homicidal thoughts probably doesn't add any pressure in the bedroom whatsoever! Although perhaps it's just an elaborate way to remember that snail water cures impotency?

I leave you with my daughter's take on the whole custom, which she repeated nonstop as we searched for some old pink clothes her brother won't possibly need:

"Quemar old clothes? I don't know what could be the explicación!"