Lance Armstrong and the Psychology of Cheating

As I've mentioned before, I'm rather fascinated with the psychology behind decision-making. Both Dan Ariely and Jonah Lehrer are leading experts in the field, at least experts in writing best-selling popular psychology books about it. Ariely has recently moved into the study of lying cheating, and Lehrer moved into the practice of lying and cheating, getting caught for plagiarizing, if you can call it that, his own previous work and falsifying quotes from Bob Dylan to help support his conclusions. The biggest cheating scandal in the news at the moment is that of Lance Armstrong, winner of seven consecutive Tour de France titles, who recently admitted, after many years of denial, that he did, in fact use prohibited performance enhancing drugs to win those titles.

According to this leading psychological expert in decision making and cheating, Lance Armstrong faced a bit of a perfect storm for cheating. Every step along the path was very easy to make and seemed quite reasonable at the time, given his good intent. 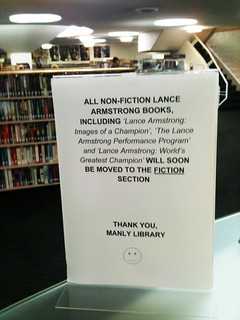 It's really very easy, as a politician, to accept a little bad money because it enables you to accomplish your virtuous goals. And study after study show that adding additional layers, such as repackaging subprime mortgages or piloting a drone from the other side of the planet makes stealing and killing potential innocents, acts that 99.99999% of us would find morally abhorrent if we had to perform them to someone's face, much easier to do with a clear conscience.

Personally, I believe that the psychology research on cheating, like that done by Dan Ariely, is our best shot at reducing immoral practices, not only in sports and academia, but also in politics and the banking system, where it can really cause serious harm. While it can't be proven, I suspect that many – perhaps most – of us would've made the same decisions Armstrong did at almost every step (pedal?) of the way, including the efforts to lie about it for years, down the dark path that has led to his international disgrace. I admit it; my gut reaction upon hearing his confession was to spit in his face and colorful

ly dress him down with words best spoken by Joe Pesci or Samuel L. Jackson… However, we must remind ourselves that it's very easy to condemn someone who cheated in a high pressure situation when you've never been in that situation.

Ariely is exactly right that ganging up to condemn the the person is the wrong move; we need to fix the system that provides such temptation and acceptance of cheating. He discusses possible strategies in his book.