The other day I went out to a restaurant owned by a friend of mine. They'd recently renovated the place and all the colors and designs were changed. About halfway through my meal, I received a call from Nature and got up to answer it. Once through the door marked "Aseos" (Restrooms), there is a sink, and two more doors. One with a photo of a sunflower and the other with a daisy. Which door should I use? Having been a patron for years, I chose the left door that had always been marked as the men's room before, but when I got back to the table, I posed the conundrum to my fellow diners. The best argument came from my wife, who argued that the Spanish noun for sunflower is masculine, el girasol, and the noun for daisy is feminine, la margarita. As far as I can remember, this is the first instance I've seen of noun gender being used to dichotomize the sexes. 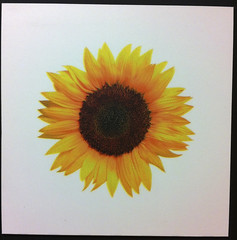 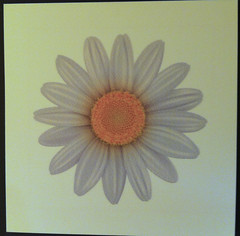 I suppose if it makes sense for any flower to be masculine, the tall heliotropic sunflower is a good candidate. It's masculine in French, Italian and Portuguese too, but feminine in German.

Of course I suspect this is all just intellectual wankery, as the owner of this restaurant owns another establishment called Bar 69, in which the restrooms are labeled with a 6 and a 9. Deciphering those digits into sexes is a bit like a Rorschach test about one's heterosexual sex life. I think we can safely assume that the owner just likes making his patrons suffer from ambiguity. It definitely stimulates conversation!