On December 29, we went to a show at the Teatro Arriaga in Bilbao called Mayumana: Racconto. It's a dance troupe from Tel Aviv, Israel that involves a lot of rhythmic percussion in their act. I was looking forward to it, because I've seen and very much enjoyed both Blue Man Group and Stomp. I must say that Mayumana left me a bit disappointed. The wonderful thing about rhythm-only shows like the Blue Man Group and Stomp is that the language of rhythm is universal. But Mayumana tried too hard to overcome the language barrier of performing in Spain by having a recorded narrator tell us "the story" (it wasn't really a story) of the formation of the group. 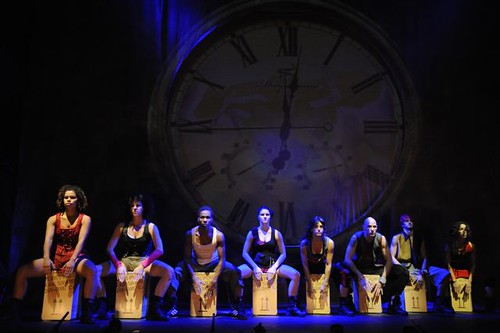 And a lot of the so called dance numbers were really just people running and jumping. They were as fit as professional dancers are, and they were good jumpers, but it wasn't very entertaining. All the humor was sort of clown-like childish slapstick, which, for one reason or another, we weren't really in the mood for that day.

Now that I'm done with the negative, let me tell you about the part that was amazingly awesome. You know how some musicians can use pedals to lay down several tracks (like this) andthen accompany themselves? That impresses the hell out of me. But Mayumana takes that to the next level…with video! They did quite a bit of things with someone running around the stage with a video camera and the live video being projected up on the screen behind the stage. 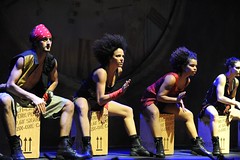 The act that most floored me involved a woman coming out to the middle of the dark stage and sitting on a stool with a guitar. Another woman had the video camera. The lady with the guitar played a nice riff, with the video of her playing shown in one corner of the screen. Then she got up and the guitar riff continued to loop. She went off the stage and quickly came back with a bass guitar, and they did the same thing, with the video of her playing the base 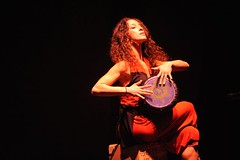 appearing on the screen in another corner. She repeated this process with an electric guitar, percussion, and backup vocals. Then she stood in the middle of the stage and sang a lovely haunting verse, in English, with her past looping selves forming the band behind her on the screen. Just when I was sure she was finished, she performed a dramatic dance to the rhythm to finish the act. It was very cool.

They did more with the video looping, including having the audience sing various sequences of notes and incorporating that, with the video of us doing it, into a later song.

Over all, it was mildly entertaining, and we're glad we went, but we won't be going to see them again. Blue Man Group and Stomp are considerably better.