On her last day of school for the calendar year on December 21, as foretold by the Mayan prophecies, Nora was instructed to come to school wearing a white turtle neck and white tights only, because the little hybrid cafeteria-auditorium gets very hot during performances. Her class had little costumes which were made during the week of workshops, which consisted of a little paper crown and a cloth sack with head and arm holes. We were informed that the Tortugas (the nickname for Nora's 3-year-old class) performance was going to be at 11:00 AM, and we were to get there by 10:50 in order to find a place in the cafeteria-auditorium to watch from. 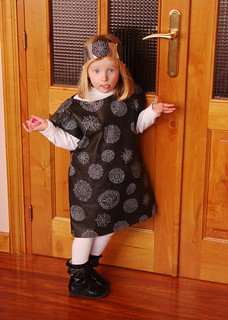 As soon as I dropped her off at school that morning, I began hearing horror stories from more seasoned parents about how crowded and hot it gets in the auditorium, and how, although each parent is supposed to come in only for their child's performance, there are always some grandmothers or aunts who go really early and stay through the whole show to avoid (or cause) the pushing and shoving that happens later. Yikes!

I had some errands to run before the pushing and shoving with other parents began, so I walked to the only toy store in town to buy one small item which I'd decided to buy the day before. What did I find, but a swarm of pushing and shoving parents. It took me a whole hour standing in a very disorderly line watching as the store owner and employee (both parents of kids in Nora's class) wrapped presents with the same finger blurring efficiency that had probably made all those plastic toys in a Chinese factory.

With my present purchased, I raced home to grab my tripod, video camera and DSLR camera and walked the now familiar path to my daughter's school.

The reports of chaos had not been exaggerated. When the previous kids finished their song, the auditorium exhaled a breath of parents before inhaling another. Apparently most of the room was full of all the other kids sitting on the floor or on little chairs. I was pressed tight against the back wall. I set up my tripod, but it quickly became apparent that, even extended to full two-meter height, it wasn't going to get above the other tall parents holding their smart phones in the air. I felt sorry for the little mothers around me who could only see the concert digitally reflected through the mobile phones of those around them.

By the end of the performance, my arms were about ready to fall off. If you want to know what that's like, press play and then hold both arms as high above you as possible for the duration of the video.

The kids had clearly been divided into "Those willing to dance" and "Those not willing to dance". Of course I'm delighted that Nora was in the former. She has a lot of fun watching this video. They were instructed to not tell their parents what song they were singing, and she kept that promise.

At the end of the video, the other children chant "¡Tíº sí­ que vales!", which means roughly "You are great!"