When we went to the United States for Thanksgiving, Nora's teacher gave her a present and told her not to open it until she was flying on the airplane. Nora was delighted. Three year olds love surprises. We managed to not get asked the famous "Did anyone give you any items to carry onto this flight?" question on our first flight to Germany, although we did on the later one to the US, the land of police state security theater. 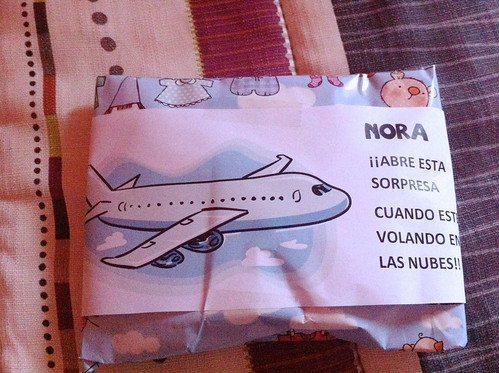 Her present. The outside says, "Open this surprise when you're flying in the clouds!!" How exciting! 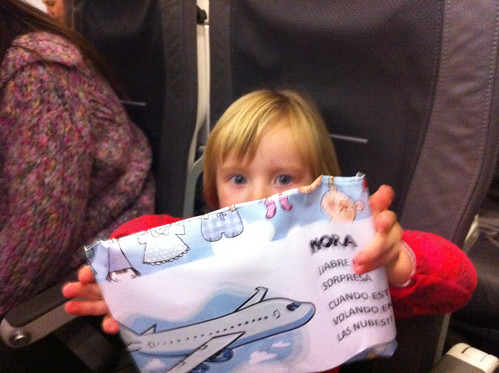 Proof that she made it all the way onto the plane before opening it.

I don't know if her teacher knew this about Nora or not, but Nora's favorite story in the entire world is that of Little Red Riding Hood. She never ever gets tired of hearing it, and as soon as you finish telling it to her, she says, "Again!" So the present was really right on target. 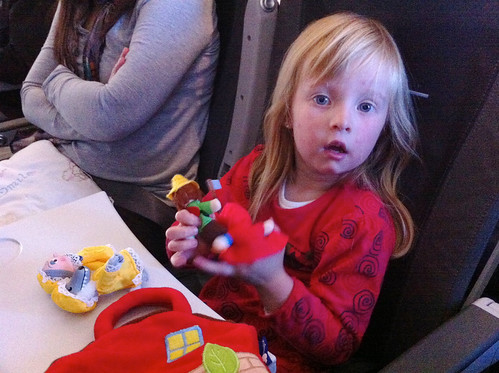 Little Red Riding Hood finger puppets! The bag they fit in doubles as Grandma's house. There's the protagonist herself, Grandma, and the wolf, wearing Grandma's clothes, of course, and the story's deus ex machina, the hunter or lumberjack or whatever profession happens to be ascribed to the manly man who saves the helpless female characters.

Nora had a good time playing with the puppets, but never so good as one night playing with her grandmother. The performance before I began recording was really the best, but I captured a lovely taste of the magic that happened that night. Pardon the jiggling; I couldn't keep from laughing.