Back in October, for my birthday, I enjoyed the treat of dining with my favorite gastronomy blogger at a Michelin 2-star restaurant in Brussels. It was an exciting and memorable experience. The worst part of it was not getting to share the experience with my lovely wife. Our neighboring Basque Country has a firmament of Michelin stars, but most of them are an hour or two away, which is not too far to drive to a restaurant, but it's too far to drive back in a stupor of digestive bliss. So imagine my delight to discover last week that Restaurante Solana, a restaurant in our neighboring town of Ampuero, was awarded a Michelin star last year! 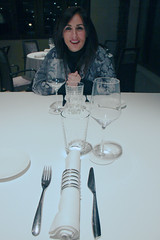 My wife and I already had a date night planned for last Friday while our daughter was spending the long "bridge" weekend with her grandparents, and it seemed too ideal a coincidence to pass up.

I consider myself to be a fairly frugal tight-fisted penny pincher, but when my wife lets go of a penny, you can actually see her fingerprint left in the molten copper. Needless to say, she was highly skeptical of spending twice as much as the next best local restaurant we've been to. Surely such restaurants are for rich snobs who don't know what else to do with all their money. "Let's just try it once," I said, "And try not to think about the money." She agreed, and we drove the fifteen minutes up the windy mountain roads to the restaurant, which sits adjacent to a church, shrine and convent to commemorate a seventeenth century vision of the Virgin Mary.

The church, convent and the yellow restaurant. The picturesque mountain views, church, and fine restaurant make this a popular place to hold weddings.

On a rainy Friday night, there were only three tables of customers, another couple about our age, and a couple a little older celebrating their tenth wedding anniversary with their two daughters, the youngest of which was named Nora.

The decor was superb, a very nice balance between rustic and clean modernity. The first thing we noticed was the wide spacing between the tables. We could hear neighboring conversations, but weren't forced to speak over them, as can sometimes happen in Spanish restaurants. 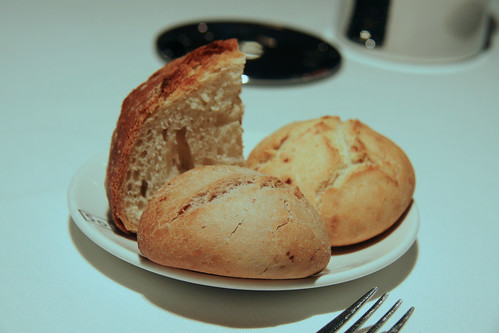 The Spanish never, ever, ever eat a meal without bread. We were given three, a rustic hard-crusted bread, one with walnuts and raisins, and another one made with onions. They were all very good, but I love a good onion bread, so that was definitely my favorite. 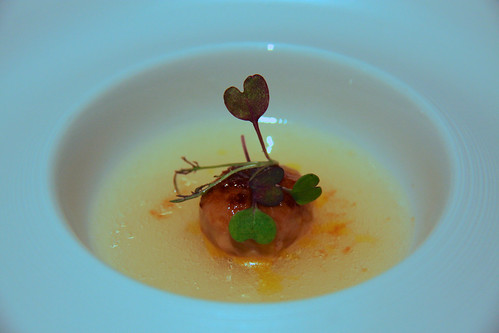 A caramelized foie gras ball on a fluffy (foamy?) sweet hazelnut cream. This little mouthful was amazing. It was our first dish, but we both agreed that it was probably our favorite of the night. I think we both said "Oh my god!" in our native languages upon consuming this bite. With her very first spoonful of the evening, my wife immediately understood the point of going to a place like this. No more convincing was needed. 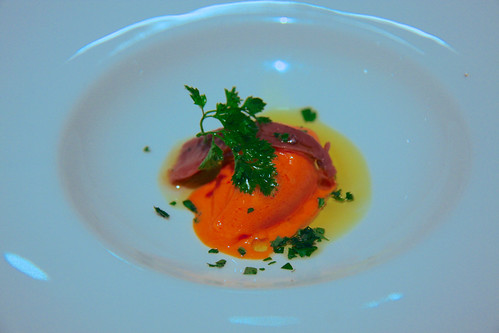 Piquillo pepper ice cream with a Cantabrian sea anchovy and Picual olive oil. One of the tricks master chefs like to do is to take flavors you know and put them in a substance or texture that is completely foreign to the original flavor. I like to think of it as playing new neuronal brain chords, lighting up two neurons, such as the ones for ice cream and piquillo pepper, that have never before been lit at the same time.

Since I was dining with an anchovy expert, I inquired about the quality of our little fishy fillet. She said, "It's small, but impeccably cleaned." 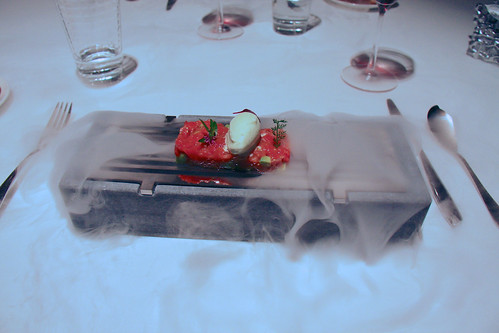 Alaskan salmon tartar with fennel and cucumber ice cream. It was served with liquid nitrogen underneath upon which warm aromatized water was poured, producing a cloud. It was supposed to represent the climate of Alaska where the salmon are caught which never gets above 7Â°C. That all sounds very exotic, but in the part of Alaska where most of the people live, and where I believe most of the salmon is caught, it gets up to 20Â°C in the summers. Even in the very northern coast of Alaska, at the Ugnu-Kaparuk airport, the average temperature in the summer is between 11 and 13Â°C. 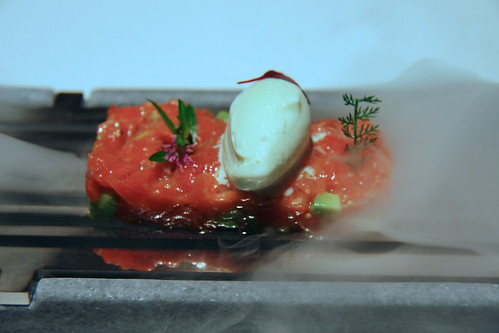 I won't lie, the water vapor billowing around the table was really damn cool. It's a gimmick, but it was awesome. And the salmon was amazing as well. 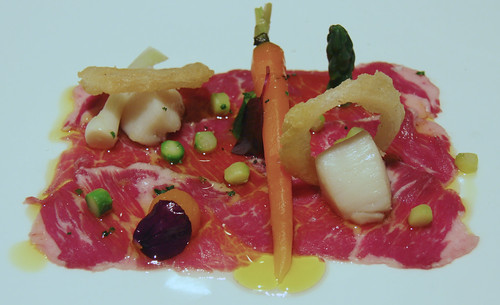 Carpaccio of Iberian prey with sweet scallops and veggies. Just like in Brussels, I was amazed to find a fried onion ring on my plate. The Spanish ham was exquisite drizzled with extra virgin olive oil. The vegetables were cooked perfectly, which is hardly at all. 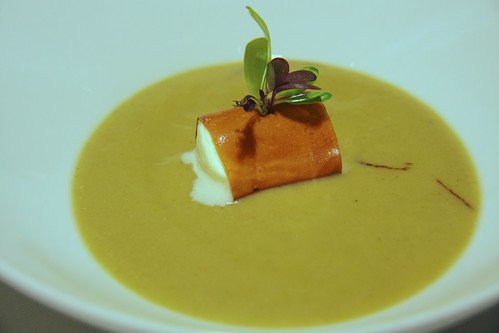 A base of foie gras with a Modena cannelloni, inside a Cantabrian cheese foam, and outside a cabbage cream from La Bien Aparecida, the neighboring convent. This was served to us with the foie gras base dotted beautifully with Modena vinegar, but before I could take the photo, the waiter poured the cabbage cream all over it. The cannelloni was quite good, and the cheese inside was fabulous, but the foie gras base was a bit too rich and filling. The cabbage purée was about the only thing we had that I thought was pretty similar to something we can make at home. 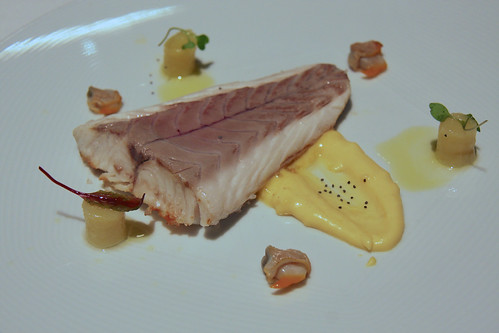 Bass fillet with aromatized butter and cockles. I'm generally not a big fish fan, but this may have been the best fish fillet I've ever eaten. Wow! The texture and flavor was exactly how fish should be. I didn't care all that much for the butter, which had a very strong buttery flavor. The cockles were pretty typical mollusk morsels. The little cylinders were potatoes.

My wife, who had entered the restaurant with the preconception that we'd eat a few small servings and leave hungry, was too full to finish her bass. And we still had the fifth main course and two desserts left! 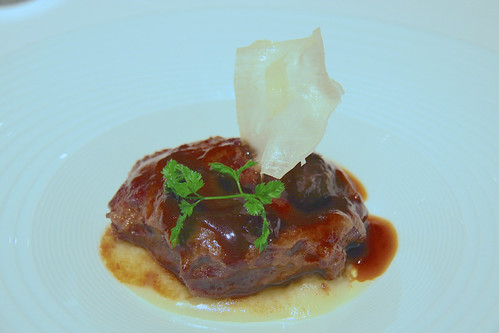 Cheek of a milk calf stewed in red wine with puréed potatoes and fried cassava. One of the most prized parts of the cow in Spain are the cheeks. I don't think Americans eat that, and I know for a fact that the slaughterhouses in England discard them. It's a shame, because it's such a tender, succulent bovine part. If my mother-in-law hadn't made a whole pot full of these the week before, I'd've been more impressed with this dish. But it was delicious and I can't imagine any way it could be improved upon. 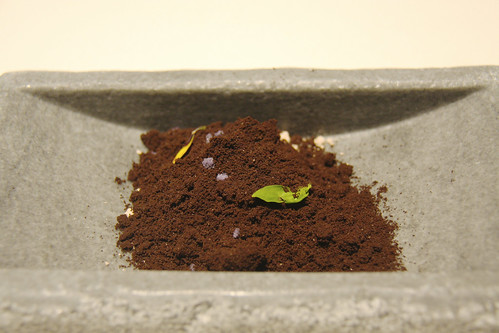 A big helping of dirt for dessert. 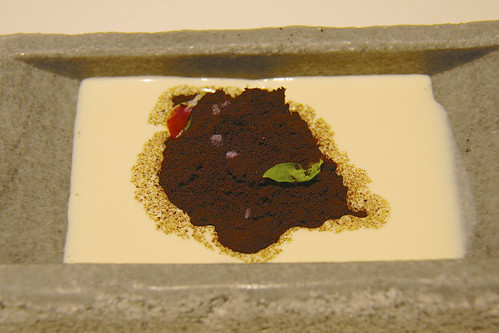 Searching for violets. Cocoa and Oreoâ„¢ powder with a szechuan pepper yogurt cream. We were told that szechuan pepper is Japanese, but the internet seems to think szechuan only refers to Chinese cuisine. The pile of chocolate dirt was pretty good, especially when mixed with the yogurt cream. I loved the cold stone serving plate, which was quite heavy. The "searching for violets" bit became clear when we discovered a purple dob of ice cream (violet flavored?) hiding under the dirt pile. 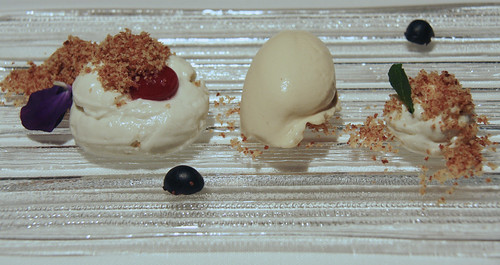 Cheesecake with Cantabrian Picón Bejes-Tresviso cheeses. It was an interesting combination of the typical sweet dessert course and the strong cheese course. For my wife, and almost for me, it was just too rich after such a gastronomical marathon. I love me some strong cheese in smooth cream form, but we were at our limits. 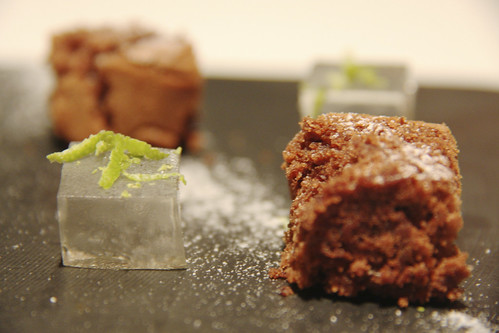 Gummy gin & tonic candy with a chocolate brownie. The gummy cube was good, but I'm not sure I tasted any gin or tonic. The brownie was, well, a brownie, not too exotic to my American tongue, but on par with the best I've ever had.

If you are interested in more light field shots, they can be found on my Lytro page.

Going to a Michelin starred restaurant is not only about what hits your tongue. It's about the ambience of the place, the professionalism of the staff, the presentation of each and every plate, never having to pour your own wine, having fresh silverware with each course, having each plate served over your right shoulder (apparently that's a thing?), and having gastronomic experiences that you cannot come close to replicating in your own kitchen. The entire experience is amazing. The worst thing a non-yacht-owner could do is to become accustomed to such niceties. The tasting menu that we had was a little too big with two starters, five courses, and two desserts. We'd have left happy with only three main courses.

Much to my surprise and delight, my wife totally ignored the bill and continues to speak of just how much pleasure and enjoyment she experienced at Restaurante Solana. I'm not sure this will become A Thing with us, but talking her into the next gastronomy adventure will be a lot easier. She "gets it" now.