State of the Offspring Address - November 2012

Our most exciting event this month was traveling to the United States for two weeks to visit my parents and grandmother for Thanksgiving. Nora was very excited about the trip and behaved admirably. We got up at 4:00 AM on a Saturday, flew to Frankfurt, and then all the way to Charlotte. The second flight was 9.5 hours long, and Nora slept for only one hour. She quickly learned how to operate her in-flight touch screen entertainment system and watched the same episode of Baby Looney Tunes about a hundred times. After another hour-long drive from the Charlotte airport, we reached my parents' house. Nora has been video conferencing over FaceTime with my parents for at least a half hour every day, and she took no time at all to acclimatize to them. At 8:00 PM North Carolina time, twenty-two hours after she had woken up that morning, I had to insist that she stop playing with her Grandma and go to bed. It took her less than thirty seconds to fall asleep. 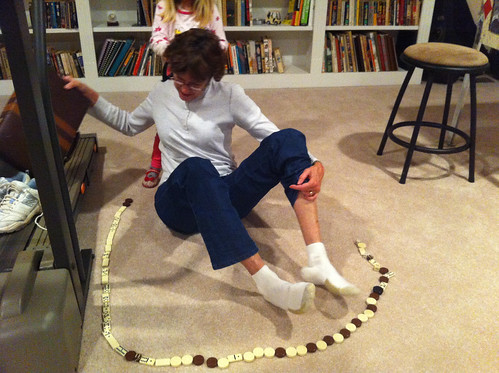 Playing a dominoes-backgammon hybrid with her grandma after being up for 22 hours.

The biggest change in my daughter I've noticed lately is an incredible knack for negotiation.

In my entire life leading up to 2012, I never negotiated as much as I do every single day with Nora. In an effort to not be a totalitarian parent, I let her suggest plans of activities and, when they inevitably clash with what I feel is best for our family, I explain why. Sometimes I win, and sometimes I lose. To illustrate her powers, I'll tell a story of how she rhetorically trounced her grandfather during our recent visit. 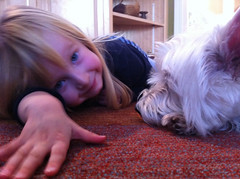 It was our first morning visiting, and her grandfather asked her what she wanted for breakfast, some toast, perhaps? She agreed to the toast. He then asked her what she'd like to have on the toast, butter or marmalade, or both. She said she wanted chocolate on the toast. Her grandfather knew that was totally out of the question. Certain he could not be budged, he said, "No, you can't have chocolate. You must choose something else." Nora put her finger to her chin, as she does when loading her rhetorical arsenal, and said something very close 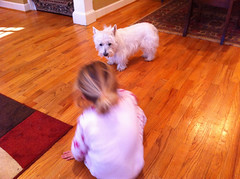 to, "Here's what I think. When I'm in [Spain], I have chocolate milk (cola-cao) for breakfast every day. In America, I don't have that, so I think every day I'm in America, I should have chocolate on my toast." Floored and speechless, her grandfather conceded that that did, in fact, make a lot of sense, and he got some chocolate syrup to spread on her toast. It was only later that he realized that not only had he lost the battle over that one piece of toast, but had agreed to a contract to give her chocolate toast on every visit in perpetuity. 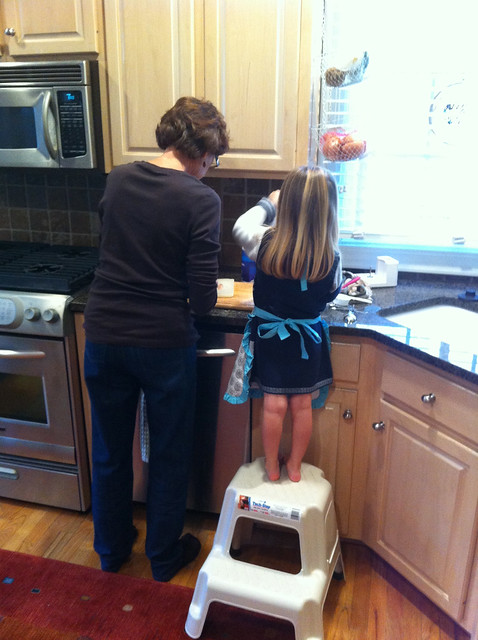 She enjoyed cooking with her grandma, especially because she could wear her new apron.

While I was writing this, I just offered her a piece of apple, and she said, "I want two pieces. First one, and then another one. Okay? Okay." She does this thing where she asks for validation, "Okay?" and then gives it, "Okay," on your behalf. If you're not on top of your critical thinking game when she does it to you, it's easy to think that an agreement between you has been reached. 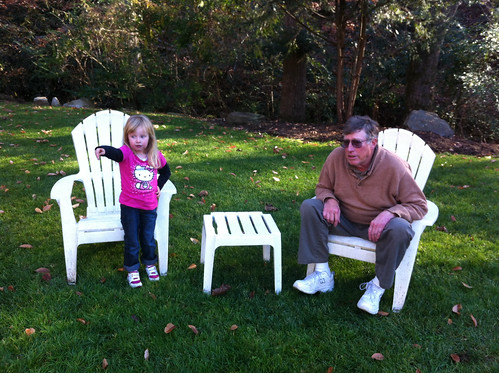 She enjoyed full reign over her grandparents, who, before they collapsed of exhaustion, were up for anything, such as races from these chairs up the yard to the driveway.

Sometimes when she asks me for a piece of candy, and I say no, she says, "Okay, well if I can't have that, then I want this and this." It's like haggling with a Moroccan rug merchant! Lately she's realized that she needs to start with high demands to have room for compromise, often walking into my office and beginning, "Okay, Daddy, I want five things…" as she pulls out her fist and peels open one finger at at time as bullet points for her demands. It's awfully tempting sometimes to put my foot down and stop the discussion, but I know how invaluable negotiating, asking for more and compromising will be in progressing in her adult life, which is my ultimate goal as a parent. 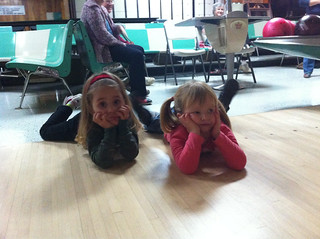 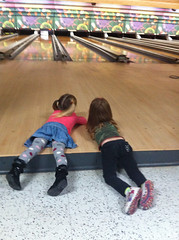 When in the States, we met up with an old classmate of mine who grew up in Bolivia and is bilingual. She has a daughter about five months younger than Nora, and it was just as fun as I had hoped to get them together to play. We went bowling, which was Nora's first time. She enjoyed it quite a bit, pushing the ball down the lane very, very slowly. 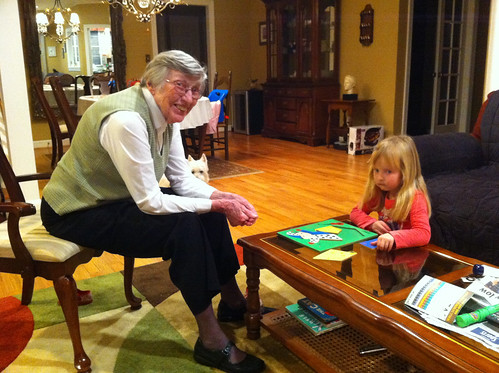 I'm so very pleased that Nora got to re-meet and interact with her only living great-grandparent, my grandmother. They did some puzzles together.

Nora learning pickleball from her grandmother. I'd never heard of pickleball until this visit, but it's a real thing, and it's really fun!

Her return back to Spain was relatively easy. She only said a handful of English words to her Spanish grandparents by mistake. However, one of her best friends at school, Claudia, is holding a grudge against Nora for abandoning her for two weeks. Claudia won't let Nora sit near her and has been acting up at home. 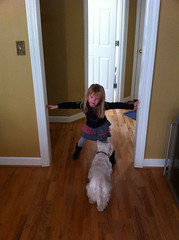 One day, soon after we returned, Nora woke up in the middle of the night, crying and saying, â€œI make me an owie!â€ That\'s her phrase for when she\'s hurt herself. I rushed to her bedside, expecting to find her fallen off the bed onto the floor, but she was nice and snug in her bed. I asked what was wrong, and she said, â€œI made me an owie, and Grandma was saying â€˜Sorry, sorry!\', but I was telling her that she didn\'t make me the owie. I made me the owie all by myself.â€ I suggested she lie back down, and she agreed and was sleeping before I had time to stand up to leave.

It turns out that her grandmother remembers the exact incident, involving a rug that slipped out from under Nora, and Nora getting upset about her grandmother's instinctive use of the word "sorry" despite the accident not being her fault. My theory is that it was this incongruity that saved the incident in her brain to be replayed at night. The truth is that "sorry" has more meanings than just "forgive me". 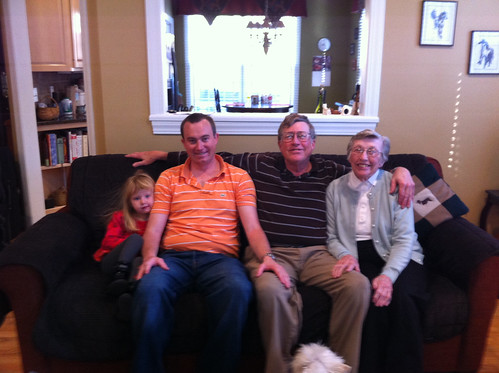 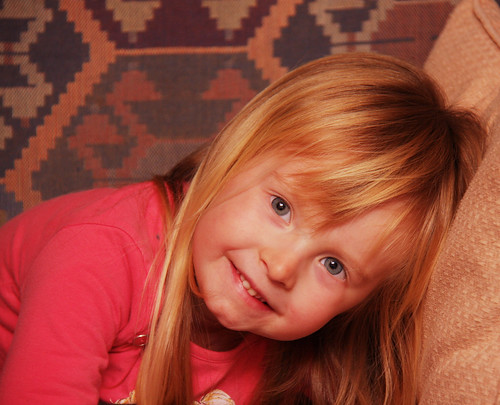