I had never heard of a "light field" camera until I began hearing marketing buzz about the Lytro camera last year. To be perfectly honest, I still don't really understand how the technology works. I have a pretty good layman's grasp of how normal lens optics work to focus an image onto film or a CCD sensor, and how and why focusing at a certain depth works, but the "light field" camera concept still seems a bit like magic. They say that it captures not only the intensity and color of the light hitting each sensor pixel, but the direction of said photon as well. Huh? And somehow this magically allows the focal length (what depth in the image is in focus) to be modified after the moment has been captured, just like they do in Hollywood movies and television where a detective tells a lab geek to "enhance this area of the photograph here" and they can now magically read the perp's license plate. Like I said, it still seems a bit like magic, but it really, really works. I may have a bit of an early adopter fetish, and I'm an avid photographer hobbyist, so I couldn't really resist buying the first consumer light field camera, the Lytro. 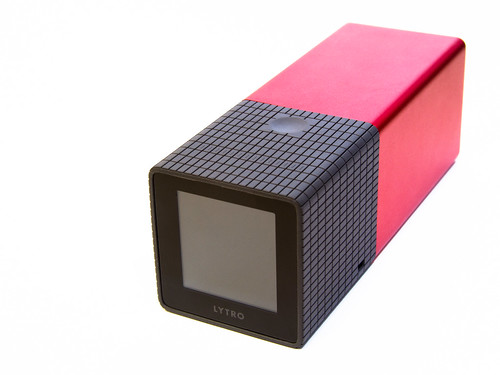 When I discussed this technology with a fellow photographer hobbyist, Simon, he had the interesting insight that the camera must have all the focal information available to it, and then the software must be using the depth coordinate of each pixel not to focus on a point, but to blur all the other pixels out of focus. If his theory is correct, then the camera must be able to produce an image with an functionally infinite depth of field. This made a lot of sense to me at the time, but since playing with the device, I'm not so convinced.

You know how when you look through a screen, or a dirty window, you can focus on objects outside the window such that you no longer see the glass you're looking through? The foreground becomes so blurred as to become invisible. I could be wrong, but I think there's something more going on than just software blurring. I think that if it could, the Lytro software would offer an infinite depth of field version of each photograph.

There are tradeoffs, of course. The images are relatively small, with few megapixels. You can export to jpeg, but the quality is so Meh! that there's really no point. The entire value of the photographs are in the interactivity of the viewing. The creator of the Lytro camera, Ren Ng, says that he's not too worried about these drawbacks because the vast majority of photography sharing and viewing these days takes place on a screen with a pointing device available, and most photos that are viewed are already optimized to strip away all that megapixel detail that big cameras provide. I have to say that he's got a damn good point.

So you wanna see some of my living pictures? Be sure to click around inside them all! (double-click to zoom)

I'm quite proud of this one. This is shot looking through a 3D crystal model of my wife and me towards a photograph of my maternal grandfather, with a reflection of a photo of my daughter.

This is a good example of the type of photo the Lytro excels at.

Textured surfaces from the camera to the subject also work well.

So far I'm very intrigued with my new toy, and my readers should expect to see many more "living pictures" in the future. It's definitely not the best camera ever, but there are certain situations where it can take more interesting photographs than any camera previously manufactured.