For Halloween this year, I offered to give a pumpkin carving demonstration to my daughter's three-year-old preschool class. The teacher was enthusiastic and coordinated with the English teacher, who was already doing some Halloween-themed vocabulary, for a date and time for the presentation. All I could get were some small pumpkins from my local grocer friend who frequents farmers markets. The only way to get a real lantern-worthy gourd is to know a farmer directly, which I do not. My daughter's teacher, however, told me that she was going to her hometown for the weekend before Halloween, and she knew some farmers that grew big pumpkins, and she'd see what she could find. It was a success! She found two gorgeous beach-ball-sized gourds for me to carve. As a pajamaed telecommuter, I don't do a lot of public speaking, so I was a bit nervous to be giving a presentation to fifty little Spanish kids (they invited the four-year-old class, too). When I arrived, I was introduced. The teacher asked if anyone knew whose father I was, and Nora was too shy to claim me publicly. I explained a little bit about where I was from and what I was going to do, and I pulled out the knives I'd brought and started lobotomizing the first pumpkin. 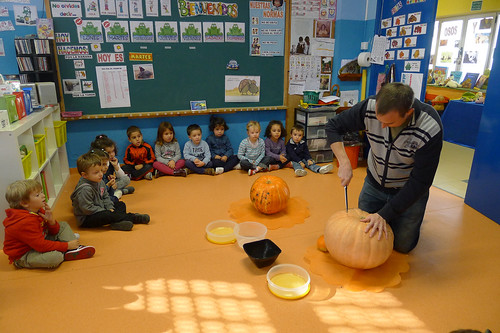 The kids sat at quiet attention. 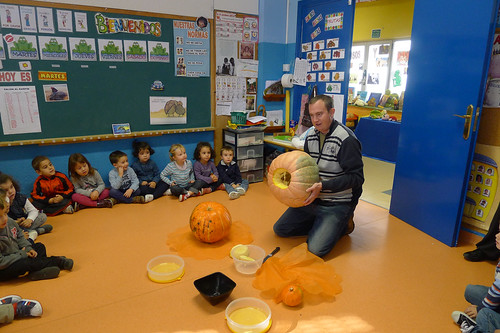 They were very curious to see what was inside. 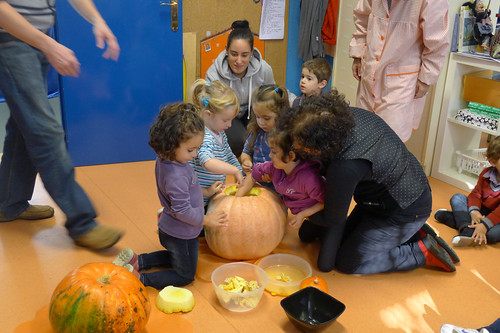 And then came the fun hands-on part, where everyone took turns pulling out a clump of pumpkin goop. 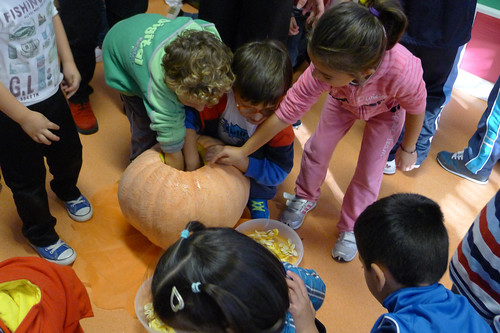 They seemed to really enjoy it. I was given a box of tissues to hand out to them after they finished. 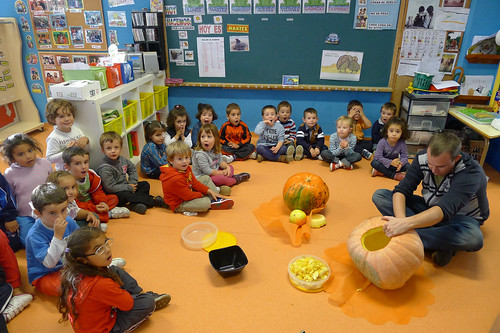 While I was carving, the teacher deftly took their attention to have them make possible faces I could carve, ranging from scary to surprised to happy to "what Daddy looks like when he's angry". 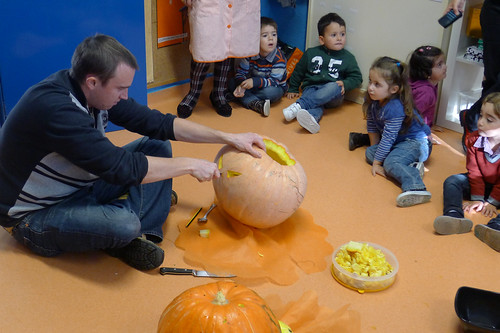 The most fascinated members of my audience were the other teachers, who had never seen this done in their lives. They seemed amazed that I could cut out a face using "just a knife".

While I was carving, the teacher played some spooky sounds from some sort of sound machine she had. Once she said, "Let's see if we can summon a witch! I'll push the button to make the noise, and you guys watch out for a witch!" That seemed a little scary for three-year-olds, but I kept carving. She pressed play, and something moved behind me in my peripheral vision. She did it again, and again a dark shape moved behind me. The kids began shouting "Witch! Witch!". It was somewhat unsettling to say the least. Two kids began crying. Then the witch came into the classroom and revealed that it was really one of the other teachers. She went to hug the kids that were crying. 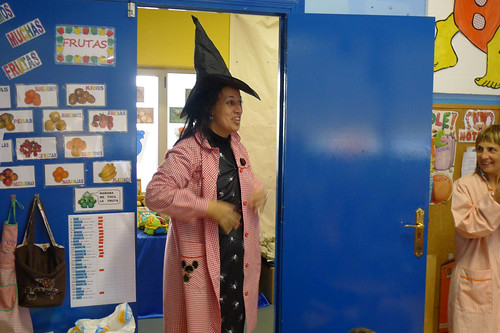 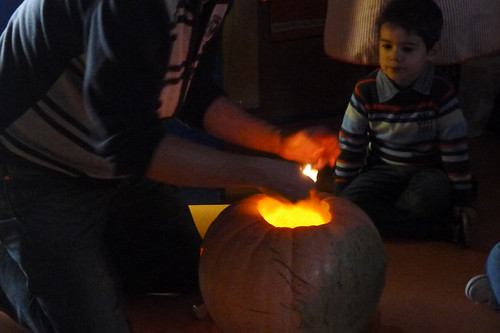 When I finished the nose and mouth, it was time to light the candles I'd brought.

All the kids assured us that they would not be scared by the glowing face, and we turned off the lights… 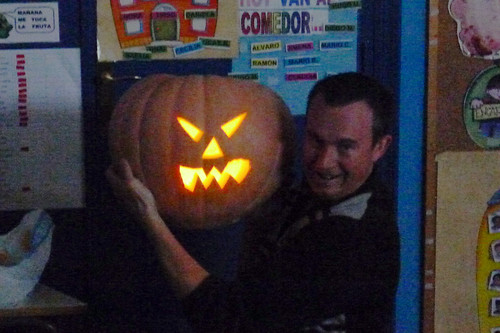 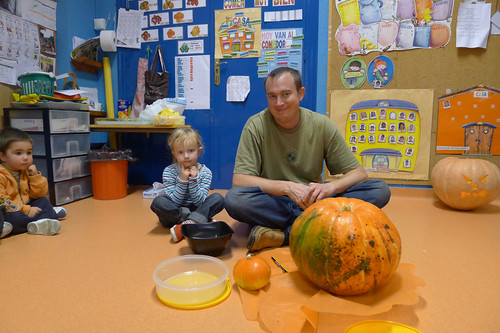 For the second pumpkin, this blond girl nudged herself closer to me. 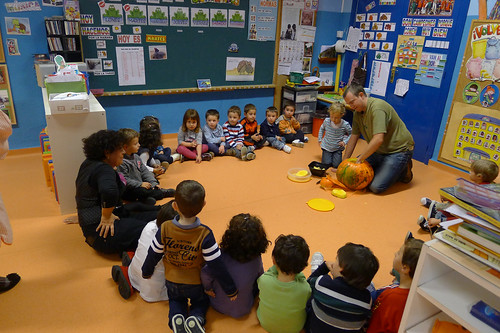 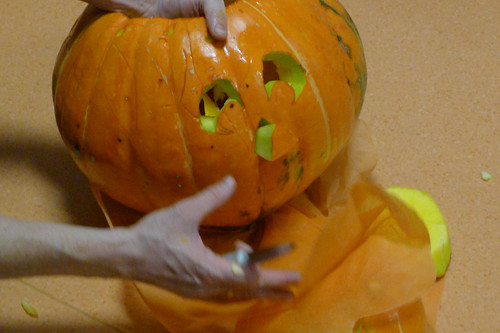 My showmanship improved and I let everyone watch as I pushed out the pieces of pumpkin to form each orifice. 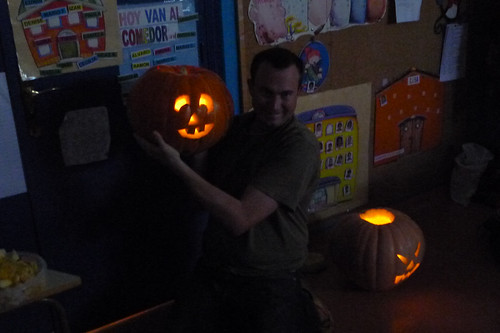 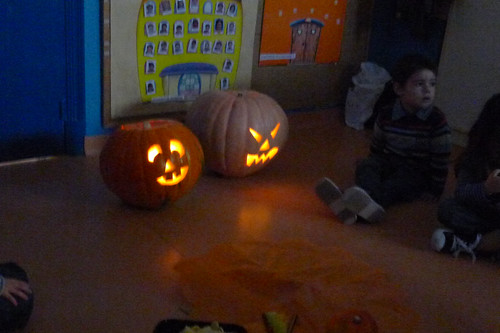 Goofy and scary, the gourd brothers.

It was a lot of fun. The kids all seemed to enjoy it, and I have since had several parents come up to me to tell me how much their kid liked my presentation. After school that day, rather than lead the kids outside into the schoolyard for parental collection, the teacher had the parents come inside to see my handiwork. I'm already looking forward to doing it again next year.