Parenting Tip: How to talk to a three year old about the future: Make a calendar!

We have this trip coming up in a few weeks to the United States to visit my folks, and my three year old daughter, Nora, is very excited about seeing Grandma and Grandpa. Lately, her video conferencing hours have skyrocketed. She speaks to and sees her Grandma and Grandpa nearly every day lately to fill the second hour of her two hour lunch break from school, and often until phone battery death on the weekends. Ironically, despite the ocean between them, I don't think they've ever been closer. When they told her that "Soon you're going to go in an airplane and come see us!" she got very excited. She doesn't really have a grasp on what Time is yet, but she's slowly getting better at not referring to last year and one minute ago as "yesterday". Suddenly it became very important to her to know exactly when she was getting on this airplane to go see Grandma and Grandpa.

After about two days, and fifty inquiries of, "But when is 'in three weeks'???" an idea dawned on me. What this child needs is a calendar!!

Deep down in my parental insecurity neurons, I feel that I don't do nearly enough drawing and crafts with my daughter, so I was delighted to have an idea of something to do. I declared, "After you eat all your lunch, we're going to make… [horn fanfare] …a calendar!!" Clearly my emphasis was successful, because she immediately began begging to do it before lunch rather than after. I held firm.

After lunch, I was feeling like a great army general (parenting is such a power trip!) commanding that what we needed here was a big sheet of paper and a pen! Immediately, Private Nora ran off to gather materials for our mission.

I explained that first we needed a big rectangle, which she subsequently referred to as a triangle. Oh well, geometry lessons are for another day; today we're learning about [reverb] The Fourth Dimension [/reverb]. She then helped me count out each line as I drew six lines to divide the triangle rectangle into seven vertical triangles rectangles. She didn't catch the trickiness about how we needed six lines to divide it into seven boxes. Then we did the horizontal lines to create four weeks.

Permanent marker capped and stored, I labeled each column with the name of the day of the week. She's familiar with them from her "What day is today?" sunrise interrogations, but can't name them in order. Then, using my calendar app on my phone as a starting guide, I added the dates, not that it mattered to her at all, but it's helpful for parental validation that the calendar is up to date.

Each morning since, we have crossed off one day. Sometimes it's the first thing she tells me in the morning, "We need to go cross off a day on the calendar!"

Since making the calendar, we've learned that she's going on a field trip next week, so immediately she demanded that it be added to the calendar. My wife drew a lovely bus on the field trip day. 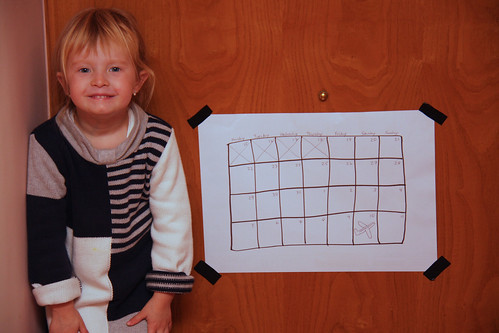 I'm not certain that she really, truly understands what more than one or two days really means, but at least she's stopped asking us about it every two minutes. Problem solved!