I was weak once. On my first ever trip abroad to Scotland as an early teen, when given a day to myself to wander about and choose my schedule, I ate lunch at a Burger King. And later, as a 20-year-old, having moved abroad for the first time, it didn't take me long to visit the McDonalds in the center of Copenhagen. When in Budapest, someone talked me into entering what was described to me beforehand as "the most beautiful McDonalds in the world", and, while I can't speak for the entire world, I must agree that it is quite pretty. Each time, my justification was curiosity about how my American culture had been translated to another culture, but I'd be lying if part of it wasn't the comfort of familiar food that makes these chains so successful. When I moved to England with my future wife, the McDonalds brand was exotic for her (it still is), so we went several times in England, and she even formed a habit of getting a cheap quick McChicken sandwich on nights when she went to her English classes in the center of Birmingham.

Here in Spain, we live about a thirty minute drive from the nearest McDonalds. Let that sink in for a second, my fellow Americans.

The fast food giants have struggled to gain a foothold in Spain. The Spanish like to say that it's because they like real food, not that processed crap! That's part of it. Another part is that the Spanish are quite vehemently against foreign food or trying new gastronomic experiences. But my favorite theory can be summed up in five letters: tapas. There are already so many ways to grab a quick bite, with little sandwiches, made fresh that morning, cocooned in cling film, available from any local bar in even the smallest villages. McDonalds's and Burger King's over-salted, over-sweetened, frozen-since-the-factory meals, which are not all that cheap compared to tapas, offer no real competition.

What I'm really trying to say is that I'm trying to work through my McGuilt over letting my wife talk me into eating at the "local" McDonalds this week. 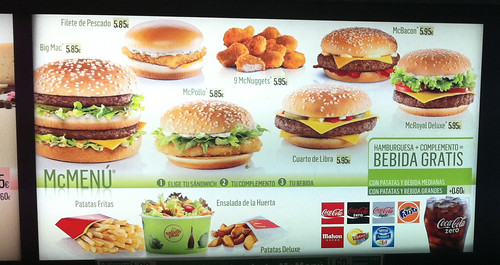 I found the menu somewhat interesting. Contrary to what we all learned from Vincent Vega, the quarter pounder is translated verbatim into Spanish as Cuarto de Libra, not a "Royale With Cheese". However, there was an item called a McRoyal Deluxe, which I ordered. The other interesting item of note is that the combo with sandwich, fries and a beverage can include beer!

5.95€ – that's $7.74, at today's rate – struck me as very expensive for the combo meal – which are called "menus" in Europe – as I remember a quarter pounder being about $1.60 and the combo being around $3.00. I've discovered, just now, that it's really quite difficult to find McDonalds prices online, but I did find this photo that suggests a quarter pounder combo in the US costs $6.29 in 2012. So I guess it's only 23% more expensive in Spain. Bloody inflation! Back in my day…!!

Here you've got your McFlurry ice creams, your Happy Meals, which apparently come with real fruit, grapes or cherries, and the breakfast menu. What most caught my eye about this side of the menu was the nice McNí­fica wordplay, which sounds like magní­fica (magnificent). Also, they have a McIbérica sandwich, which the McDonalds website explains consists of "rustic bread, pork, semi cured Spanish cheese, crunchy peppers and a sauce of olives and tomatoes". In retrospect, I really should've chosen that sandwich. 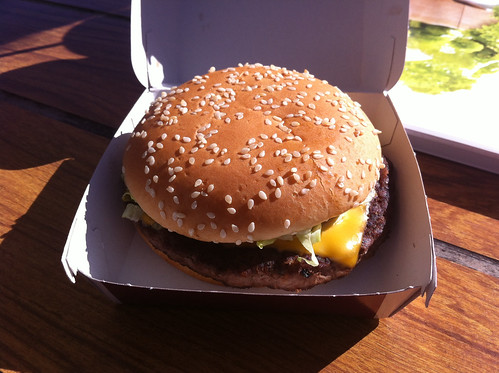 Meh… The burgers really are the same everywhere. Don't get me wrong, it's salty and sweet and plays a beautiful dopamine chord on the cerebral harpsichord, but… BLECH! 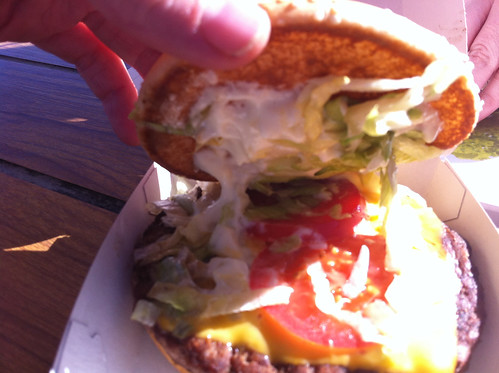 Whipped together as fast as possible by an underpaid assembly line employee. The McDonalds formula!

I'm left with the same rationalized good feeling I get after getting a haircut or mowing the lawn or painting a room: Whew! So glad I won't have to do that again for a while!