The town in which I live is situated at the mouth of the river Asón, which begins way high up in the mountains and flows down into the tidal basin estuary you see in the current header image of this blog. Occasionally I have noticed a fog hanging over the river in the mornings. The fog yesterday, however, seemed more dynamic. I could see it churning with my naked eye. I've always been a big fan of churning and flowing clouds in timelapse videos, and the visibility above the clouds was fantastic, so I raced to set up my tripod, camera and intervalometer before leaving to walk my daughter to school. 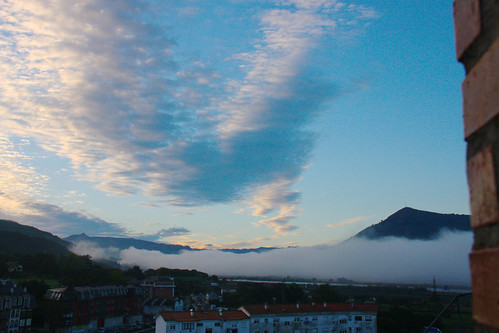 You can't really see the river, but you can follow where the fog goes and know where it flows.

Several hours later, I noticed that the shutter clicks upstairs had ceased due to battery failure, I dismounted the tripod and began copying the 62 GiB of photos to my computer. When I finally got around to animating them at 30 frames per second today, the result was just as I'd hoped. Behold!

Not bad for a timelapse taken from a bedroom window, if you ask me.