The second "must see" tourist attraction in Brussels after the Grand Place has got to be the Atomium, a bizarre and unearthly structure built for the 1958 Brussels World's Fair, which is, in theory, modeled after an iron crystal. I saw it once when I was flying into or out of a layover at the Brussels airport, which makes sense given its proximity to the airport. If nothing else, it's very big and very bizarre. My lack of interest and the fact that it's on the outskirts of town, best reached by car, placed the Atomium at the end of my Brussels itinerary. On Sunday, October 14, Simon drove me and his three year old son, Matteo, out to see it sparkle in the crisp morning light. 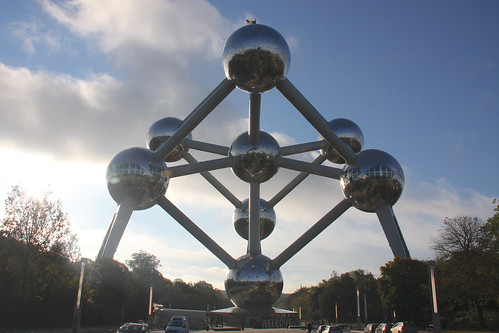 Simon says he lived in Brussels for years before realizing, when someone told him, that the Atomium, which looks like a pretty exotic geometric shape, is just a cube on its corner with an extra vertex in the middle. In his defense, there aren't many angles from which that is obvious. 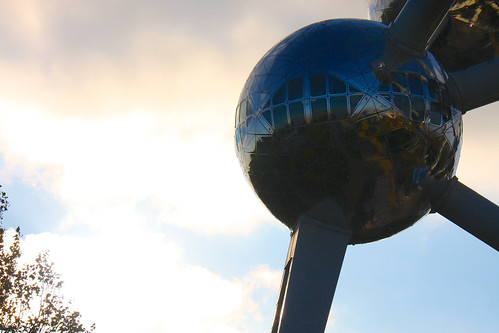 Enormous shiny spheres sure are photogenic. I can imagine some cool sunrise or sunset or timelapse photography opportunities could be had here. 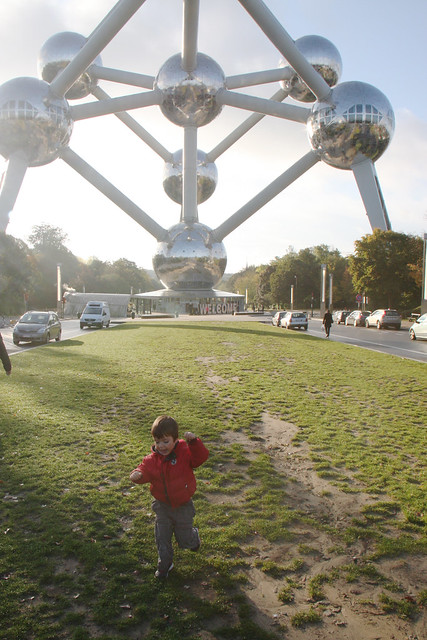 It was funny that right when my lens had a wide enough angle to photograph the entire thing was right where all the grass was worn away from footsteps. 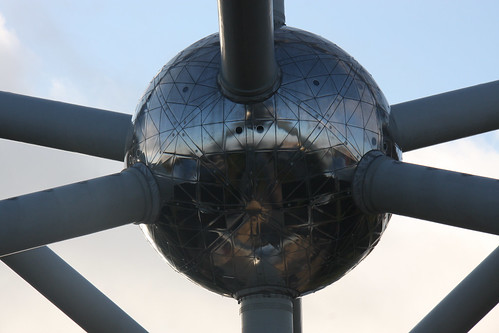 We were there just before it opened, and when a line began to form to enter, we got in it. But then I saw that it cost 11€ per adult, and I decided I wasn't that interested in going inside the structure. 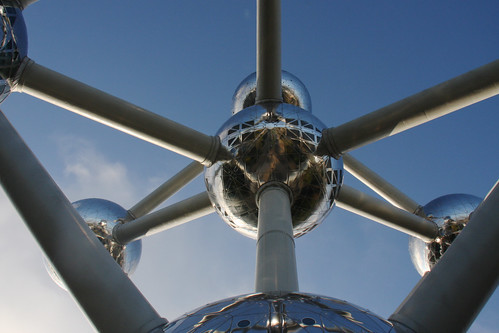 It was fun enough to photograph from the outside. 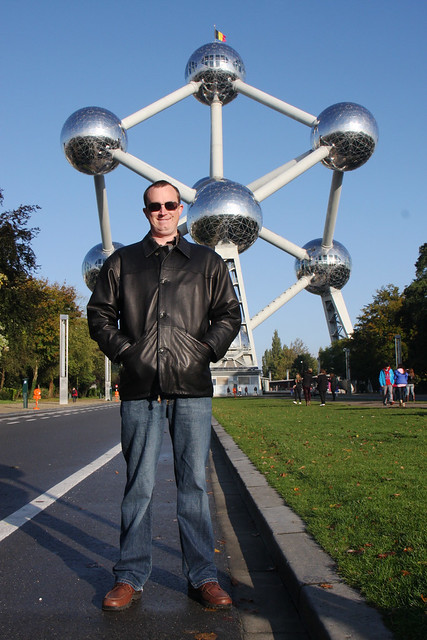 During our leisurely stroll around the grounds, a tour bus drove up and excreted dozens of hispanic tourists. Many of them were doing silly Pisa poses.

When Simon was taking the above photograph of me, Matteo came over and wanted to use the camera, too, so Simon let him push the shutter button once. 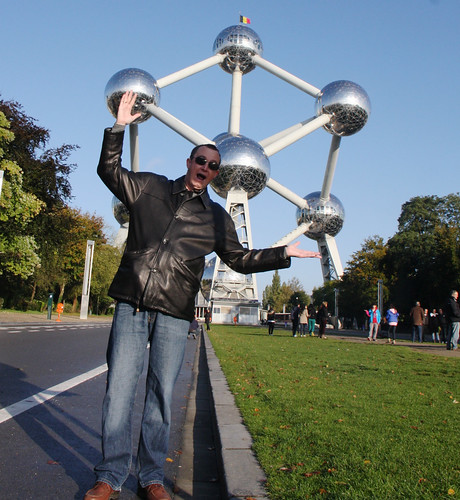 I was just doing silly jazz hands gestures while Matteo snapped what I thought would be a blurry throw-away photograph, but darned if he didn't catch me juggling the Atomium.

After I got tired of taking photos of enormous shiny balls, we headed back to Simon's house and then walked to a local bakery coffee shop for a breakfast with Paola. Brian and Cloe soon showed up with their two sons. 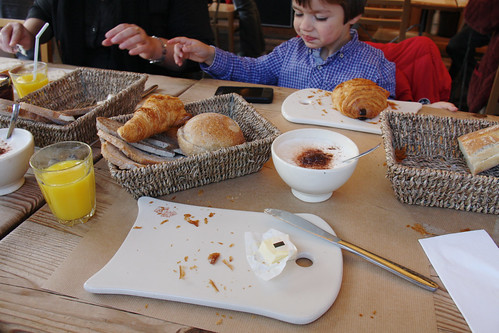 It was a very strange breakfast, to me. We were served orange juice, coffee (in a handle-less bowl), and a basket full of various types of bread. Then it was up to us to spread butter, jam, and chocolate over our bread and eat it. You can do a lot worse than freshly baked bread with white Belgian chocolate spread over it. 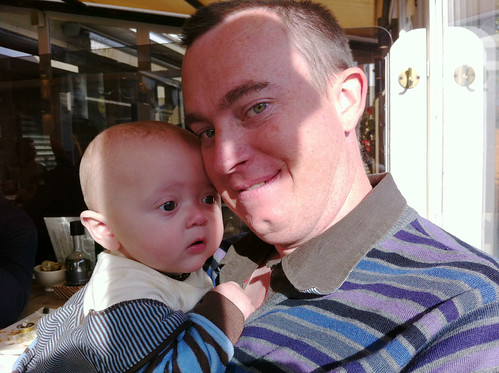 I grew quite fond of little six-month-old Milo during my visit. He was such a sweetie with his big spherical peach-fuzz-covered head, which casts funny shadows. 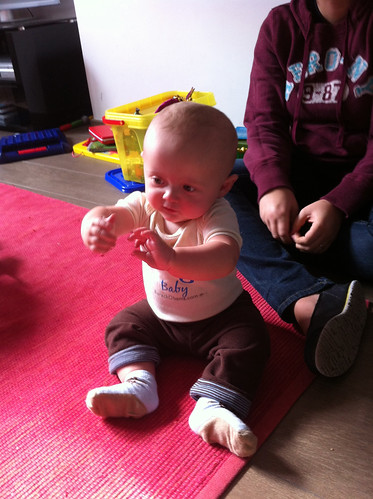 Milo's "Obama Baby" t-shirt that used to belong to his older brother. Brian and Cloe only have babies when Obama is running for president. 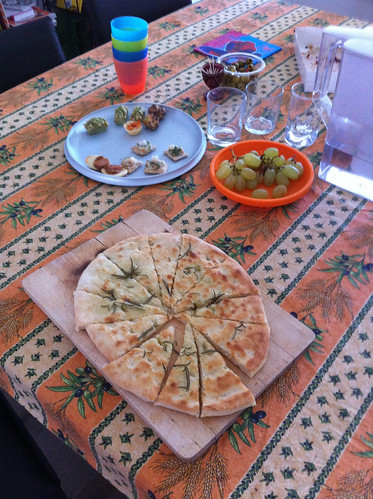 Before it was time for Simon to drive me to the airport, Paola brought out some piping hot focaccia to round out our all bread Sunday. 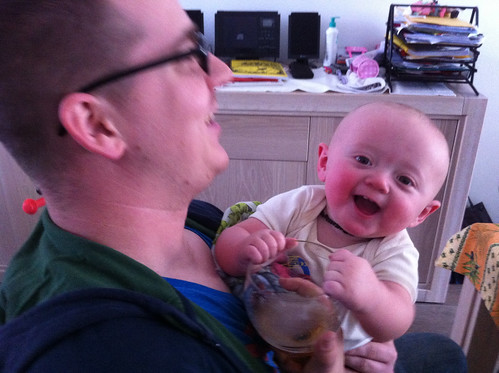 Milo had a great time holding onto and sucking at his father's beer glass. Didn't I tell you he was a cutie?

Before long it was time to say our goodbyes. Brian and Cloe and their sons Aiden and Milo are about to move to the Pacific Northwest, which is sadly very, very far from Spain. I expect to see Simon and Paola and their kids in a year or two in either Spain or again in Brussels. But saying goodbye to our physical selves wasn't really all that sad, since we were daily online friends before meeting and will continue to be after spatially parting.

When I mentioned that I had bought some beer in Bruges that I was hoping to smuggle back home on my carry-on bag, both Simon and Paola were quite convinced that I'd never make it past security. I decided, however, it might be worth a try, as I regularly fly with a pocket knife. Simon agreed to wait outside the security checkpoint in case I had to come back out and unload my beer on him. When I made it to the security checkpoint, I got my tray and put my belt and wallet and stuff in it and set my bag on the conveyor belt. A security officer asked me, in several languages until she got a response, if I had any liquids in my bag. "Nah," I shrugged. I went through the scanner without beeping and awaited my bag.

From where I was waiting, I had a clear view of the x-ray monitor. When my bag went through, I could see the outline of the bag, no clothes, but all six beer bottles stood out in stark contrast. They pulled me aside and made me wait while they searched through their staff for someone who could speak English. Once they found someone, the guy shouted something containing the word "liquid" back to the lady who had questioned me pre-x-ray, and got nod in response. He said, "Did you say you didn't have any liquids?" To which I said, "Yeah, other than the beer, of course…" Astounded by my stupidity, he informed me that I would have to leave the beer at security. I asked if I could take it to a friend outside and he sighed and reluctantly lead me back out of security to see Simon's knowing smirk.

We went back to the RyanAir checkin desk to inquire how much it would cost to check my bag. The checkin attendant was a trainee – I swear I always get the trainees! – and misunderstood me. Once I got her to understand my question, she told me it would be 60€ to check the bag. Fat chance, RyanAir.

While I removed all the beer, which I had paid 16€ for in Bruges, Simon went to a nearby shop to ask for a plastic bag. Unwilling to accept the beer as a vastly insufficient payment for his B&B services, Simon insisted on giving me 20€ for the beer. He'd make a rubbish capitalist. We shook hands goodbye again, and he walked out of the airport with all my bottles of Belgian beer.

There is one Trappist Belgian brewery that is famous for thumbing its nose at the capitalist beer industry and has, over the decades, gained an exclusive aura in doing so. The Westvleteren Brewery only sells their beer on site at the monastery. You can only buy one 24-bottle case at a time, and if you buy a case, they take down your name, phone number, and license plate, and you have to wait 60 days to buy another case. They make only 60,000 cases every year. When Brian offered to give me one from his last remaining six pack, I graciously accepted.

There I sat, in the open lobby of the South Brussels Charleroi airport, with plenty of time before my flight, and a bottle of this rare Westvleteren beer. I got out my keychain bottle opener, the only purchase from the beer shop in Bruges that would make it home with me, and cracked open the label-less (since 1945!) bottle. Committing a sin for which any Belgian would buy me a one way ticket out of the country if I didn't already have one, I drank the beer directly from the bottle.

Once through security again (I chose a different queue), I came across an enormous Duty Free shop selling – you guessed it! – Belgian beer! For 24€, I got seven bottles and two glasses, a detail I had been missing in my previous smuggling attempt. Crisis averted!

After a boring flight which may have involved the woman next to me elbowing me in the gut to make me stop snoring a few times, we were on our approach to Santander airport. 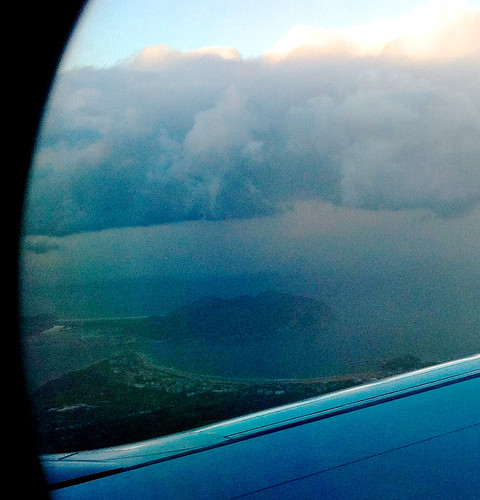 We flew right over Colindres and Laredo where I live. I could even make out my apartment building. Apparently I live close enough to the airport – about a thirty minute drive – that the pilot already had lowered the landing gear when we flew over my town.

RyanAir likes to talk about how they have a great record of arriving on time, but the flip side of that is that they have a reputation for arriving way too early. When we landed, I called home and they hadn't even left to come get me yet. After a 45 minute wait outside in some stormy Spanish weather, my father-in-law drove up to pick me up.

When we arrived home, I opened the door to hear a "Poppy's home!!!" from the living room and my little darling Nora ran into my arms repeating "Poppy, I missed you! Poppy, I missed you!" over and over. One couldn't ask for a better reception. 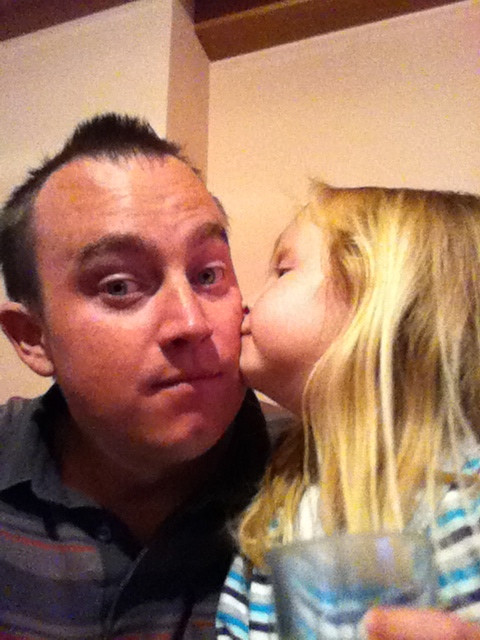 One of many welcome home kisses.

From walking to drinking to tourism to fine dining to partying, I had a pretty fantastic trip to Belgium. A big thanks and raised bottle glass of beer to those who helped make it possible!