I have long been a fan of my blog buddy, Simon's, penchant for blogging about his hobby of going to really expensive Michelin Star restaurants. He really is quite prolific. I knew it was an expensive hobby, but I always wondered just how much it costs, what the ambience of the places feels like, and, of course, what such exotic food must feel like in one's mouth. When he asked what kind of restaurants I would like to try during my visit, I immediately got excited about maybe going to one of these fancy places. He sent me a list of possible options, with links to menus and his blog posts about each one, and I very quickly settled on the most expensive one, Comme chez Soi. 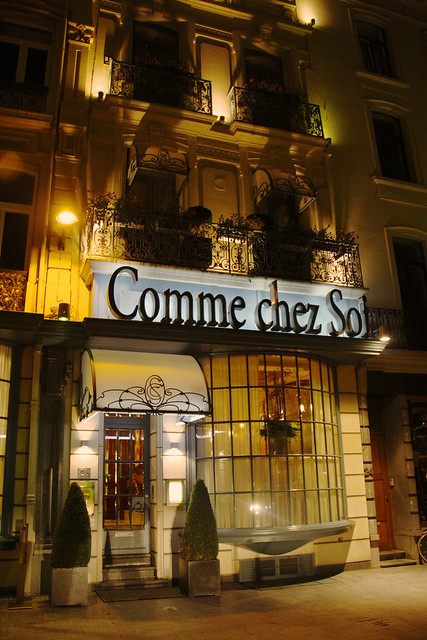 As Michelin Star dining veterans, Simon and Paola know that the only reasonable way to order at a place like this is to choose the Tasting Menu. If you order a single meal a la carte, you're still paying a lot of money and only getting one thing to experience, which you might not even enjoy that much. The tasting menu is a variety of small bites designed to show off the chef's mastery, which is really what you're paying to experience in the first place. 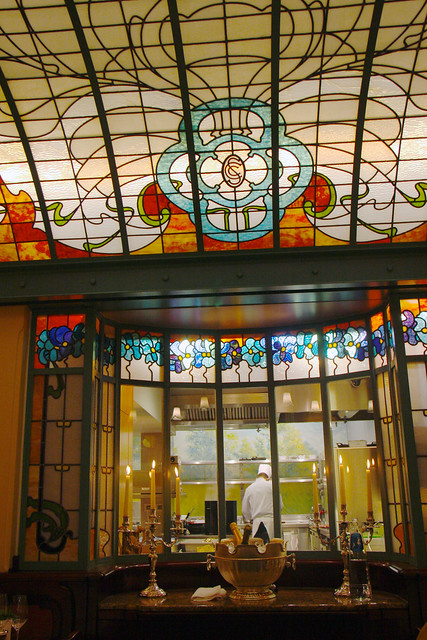 Apart from this elaborate glass decoration and view into the kitchen, Comme chez Soi was just like a lot of restaurants I've been in. Part of me was expecting either incredibly ornate palatial decorations or extreme austere minimalism, with tuxedoed waiters hovering around every table. The name of the restaurant translates to "Like At Home", so perhaps they made a special effort to be more cozy.

There were two tasting menus, with five and six dishes, costing 133€ and 151€ respectively. We opted for the former. Some of the other restaurants Simon gave me to choose from also had a "wine pairing" package that could be added on, which usually added about 50% to the price. Comme chez Soi did not, but my dining companions did some negotiating in French and got the sommelier to suggest wines with each dish. I don't know how much that ended up costing because they wouldn't let me see the bill, insisting the wine pairings were their birthday gift to me. For that I am very grateful. At least we didn't do it the Spanish way! 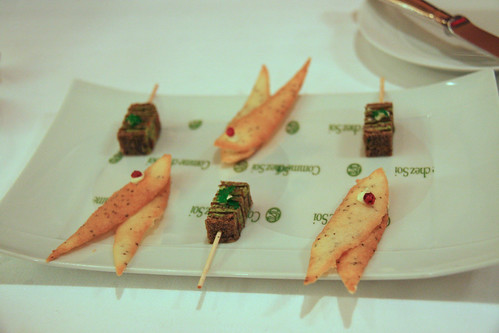 First was had this little anchovy-shaped crunchy crackers, with some square centimeter sandwiches. They were pretty tasty. I waited longer than my companions to eat my little sandwich, and when I did, a ninja waiter, who had been hovering invisibly and non-intrusively came and swooped the plate away before I could swallow my bite. Impressive. 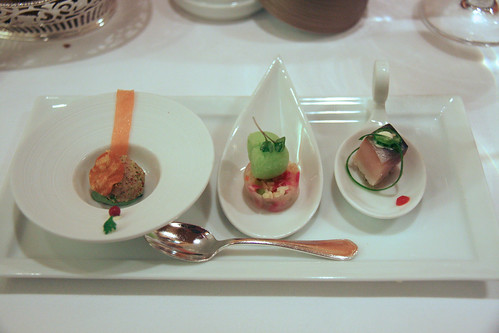 Other various bites. If my dinner companions are anything to go by – and I believe they are – the two dishes on the right are meant to be picked up and the food dropped in the mouth like an oyster. Licking subsequent plates is frowned upon, however.

Duet of smoked eel, horse radish cream, granny smith. Apparently it's very common in high class Michelin Star restaurants to mix various flavors and then package them in a sphere using a process known as spherification. 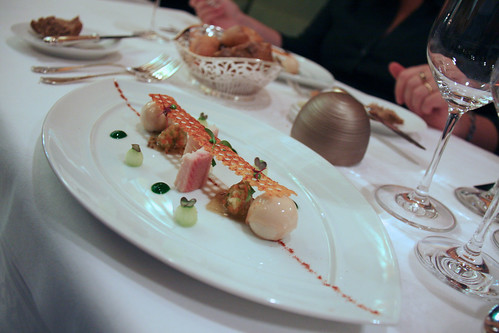 The tiny light green balls were the granny smith apple flavor spheres. When Simon and Paola ate them, they each said, "Oooh! What a nice surprise at the end!" When I inquired, they told me that the green apple balls also contained some truffle, which is a taste sensation my little plebeian nasal cavity has never experienced, so I didn't really notice anything special. 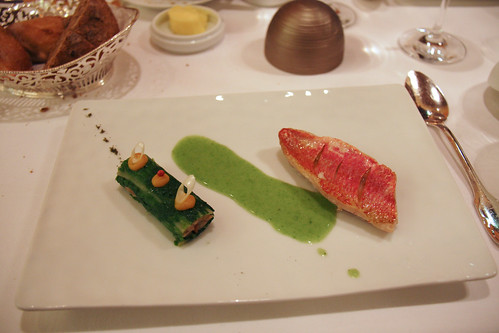 Roasted brill, crustacean béarnaise sauce, vegetables cannelloni. It takes longer to say than to eat! I was surprised by the waiter coming by after serving us our plates with a light dotting of green sauce down the middle and ladling a big puddle of green sauce. The sauce was delicious, but it seemed a bit anti-fancy. "Like at home", I guess. 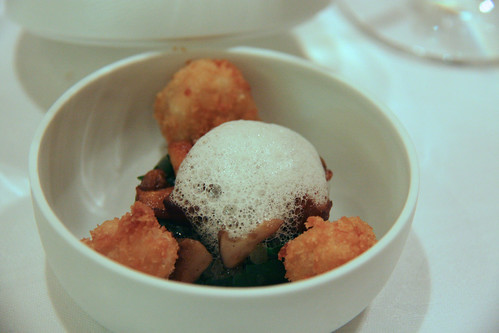 Red mullet, crispy veal sweetbreads, spinach shoots, wild mushrooms. Don't you hate it when you're washing dishes, your hand slips, and a big blob of dish soap flies across the kitchen and lands on a plate you're about to serve to your guests? I've always been amused by the term "sweetbread", which is neither sweet nor bread. This plate was good, but nothing mindblowing. 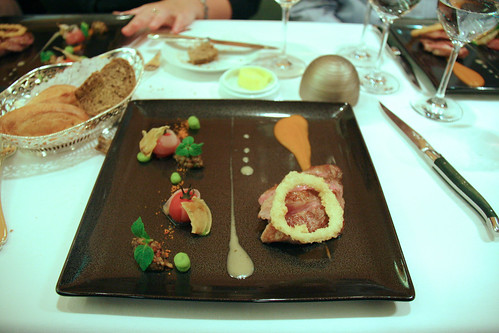 Pan fried pluma with thyme, lardo di Colonnato, small truss tomatoes and unpeeled garlic. You'd think at these prices they could peel the garlic! This was the main course. The "pluma", which is Spanish for "feather", is apparently from the shoulder/neck area of a Spanish bellota acorn-fed pig. The fried onion ring was an odd addition to this dish, strangely juxtaposing cheap fried food with the high-class spherified green blobs. 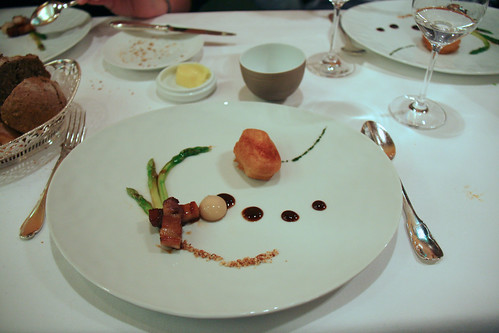 This dish doesn't appear on the menu, so I can't recall exactly what it was, but those are clearly some baby asparagus stalks. I do remember the caramelized bacon because we had talking a few days before with Cloe about how Europeans dislike, or dislike the imagined taste of, combining something sweet with bacon as so often happens to breakfast eating Americans when one's maple syrup spills off one's pancake and onto the bacon. And I do remember the little brown ball exploding with mushroomy goodness in my mouth. 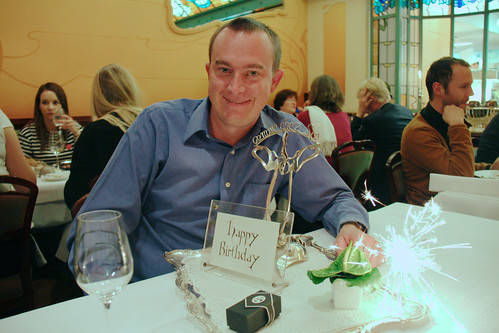 The birthday boy. We had seen a similar sparkler go to another table, and Simon and Paola must have informed the waitstaff of my birthday when I slipped up the steep narrow stairs to the water closet. I like this shot because it gives a good idea of the clothes people were wearing. Nice, but not incredibly elegant. 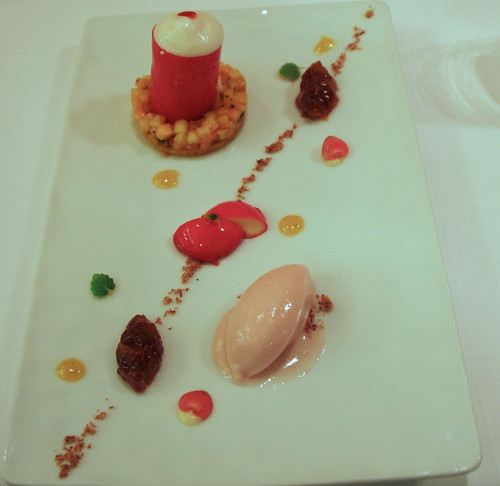 Minced exotic fruit, fresh almonds, peaches and nectarines sorbet. Both sorbets were very nice, and each blob was exciting in its own way. The red tower walls were pure sugar which must have been rolled into a cylinder somehow. 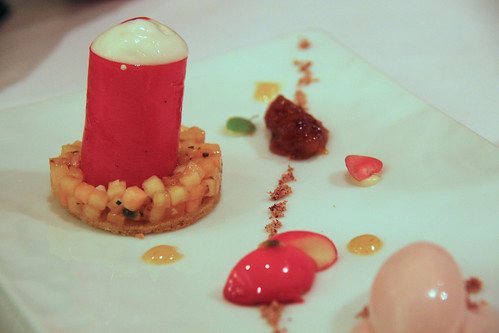 The presentation is a big part of what was happening in the kitchen. Restaurants like this are a tri-sensual experience. 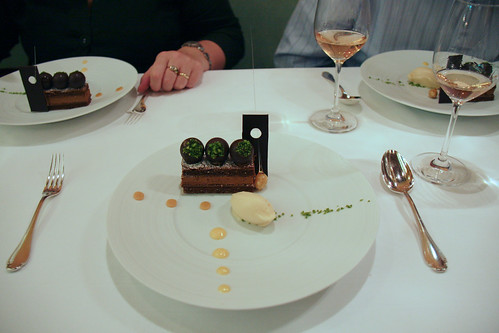 Crispy bitter chocolate, praline, pistachios, advocaat. This dish was served with a very sweet dessert wine. Normally I'm not a fan of sweet wines, but this one was fantastic.

Our dealings with the sommelier were interesting because he wanted to speak English so that I could understand as well, but his English wasn't that good, and Simon and Paola understood him better in French. He was, however, Spanish, so a couple times I asked him to switch to Spanish, but, despite it being his native tongue, he found this very difficult and often had to think about which words to use because he only had experience in the subject matter in French or English. Any bilingual person who has worked or done an activity only in the foreign language will understand how awkward it can be to translate back to your mother tongue. 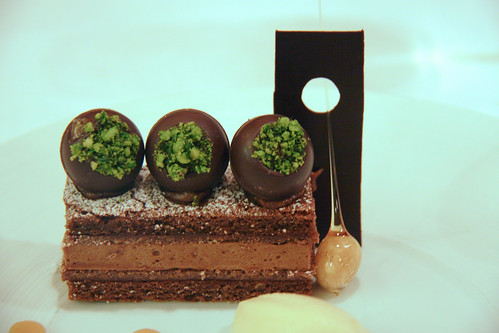 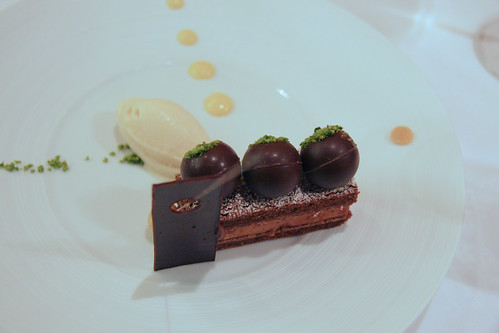 Simon says he's a little bored of the stringy sugar fad, but that the encased nut (hazelnut?) was a nice touch. I was impressed by the architectural design aspect of this dish. Someone had to come up with the idea of a slab of chocolate sticking vertically to the cake, and then punching a hole in it to thread – very carefully – the sugar stick through. Very creative. 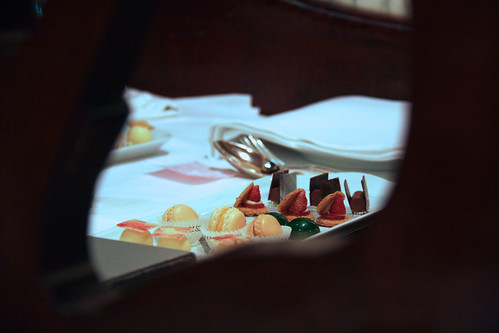 I had a nice view through a wooden spacer of our final plate. 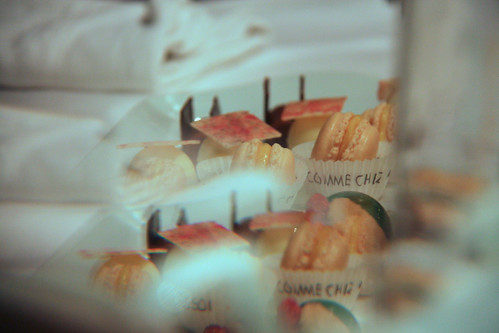 Simon said his view, through a glass window of the spacer, was nice, too, so I gave him my camera to take these two shots. 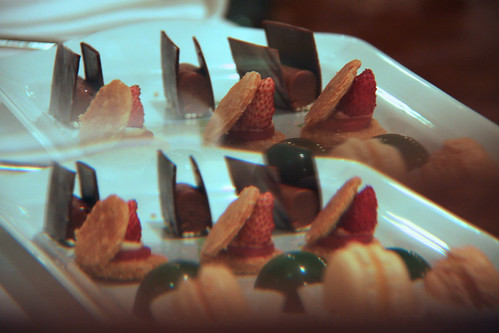 There's only one row of chocolate things and strawberries, but the difference in glass thickness refracts the light so you see two.

About this time, we saw the waiters moving a table nearby to make room for a man to kneel down before his date and offer her a ring. She was clearly caught off guard, because it took her several excruciating minutes, with waiters standing at attention and the entire restaurant staring, to respond. They ended up holding hands and caressing faces, so it seems all went well. 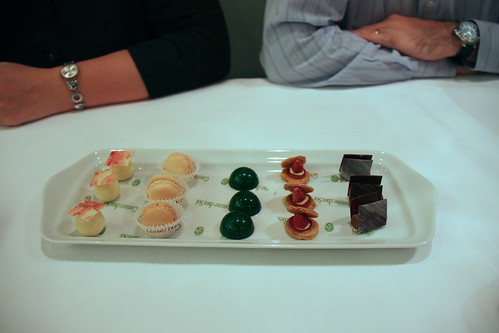 Our foreshadowed dessert platter. Nothing too special, but we were pretty full.

It was pretty, though.

Towards the end of our meal, the sommelier came over to offer us a "44 port", by which he must've meant a port wine from 1944. According to Google, "44 port" is either a brewery in Newark, New Jersey, or a TCP/IP port used by trojan viruses. He said that he opened the bottle for an American – exotic! – journalist several days earlier, and she had been blown away. I must give him credit, however, for also disclosing that it was 29€ per glass. My companions let/made me decide. I declined. Perhaps on another day when I wasn't blowing so much money on exotic tastes, I might splurge on something so special, but I was satisfied with my level of splurging that night. 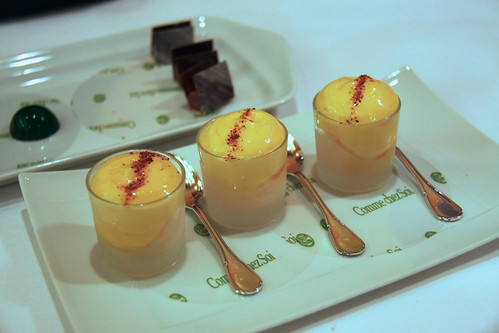 And finally, we got some little servings of custard on top of sorbet, I think it was. The bottom layer was cold. 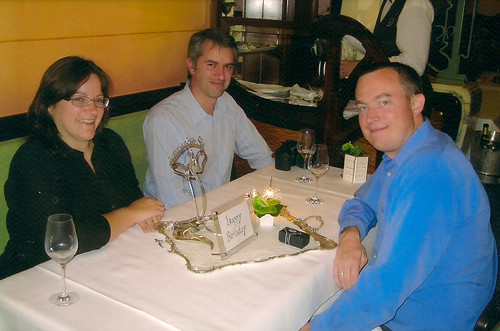 I have neither the interest nor the budget to frequent such restaurants, but I think I could do it once a year or so. The experience was as interesting as I'd hoped, quenching both my hunger and my curiosity. In the mean time, I'll keep enjoying Simon's food blogging as I have for years.

Thank you dearly to Simon and Paola for showing me one unforgettable birthday dinner.