Tired and hungry from my multi-kilometer tourism trekking, it was time to taste some typical Belgian food and, more importantly, some Belgian beers. My hosts, Simon and Paola, chose La Villette, a small, warm restaurant boasting Belgian Cuisine. Simon and I took the metro into the city and stopped off for a pre-dinner beer at a dark, cozy pub. It was down a small alley that had actually caught my eye earlier in the day. It was a narrow, dank, stone alley off of a main pedestrian street that led, after six meters, to two doorways: one led, jarringly, into a bright florescent lit shopping mall, and the other to a dark pub. Before we found the pub we were looking for, however, Simon took us down another alleyway to another pub. We entered, with Simon saying a French hello to some gentlemen at the entrance. After a brief look around the dingy, uninteresting place, we decided to head back out. The gentlemen said a cheery goodbye to us only 45 seconds after welcoming us. 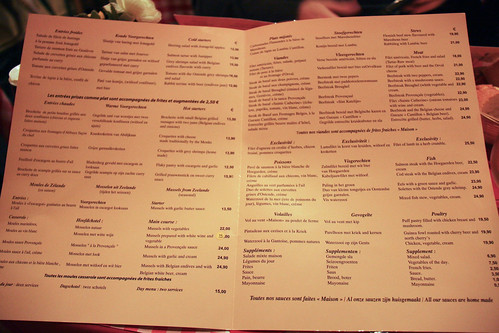 In typical Belgian style, the menu was in three languages, French, Dutch, and English. Simon showed great restraint in not photographing the word "prauwnsstick", a bad translation of brochette de scampis, a French phrase even I understand. 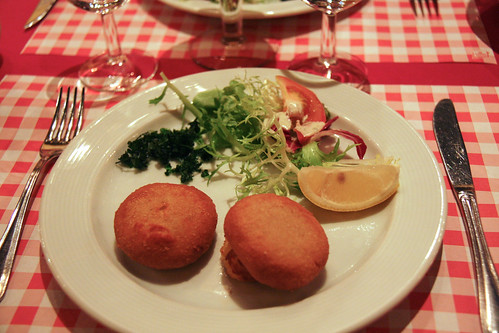 "Croquettes with cheese made traditionally by the monks". They were delicious, and cost 7€ each, but not incredibly distinct from croquetas I am given as a free snack with a 1€ wine back in Spain.

One of the items on my "to eat" list in Spain is real gulas, baby eels. Fake gulas are a very common food in Spain, and look like this. They are made with that mystery seafood that they make fake crab sticks out of. The real gulas, which look like this when raw, are extremely expensive and only served at the very finest restaurants. So I was intrigued to see anguilles on the menu. I had to try them. 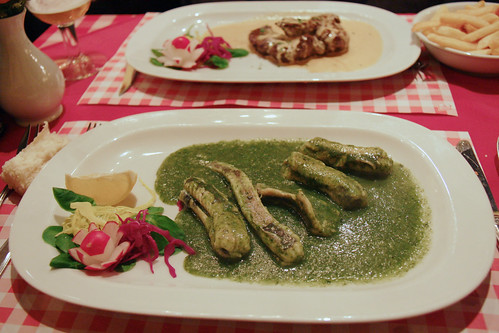 I was definitely eating eels, but they were adult eels with spines, not the baby eels I'd been hoping they might be. As you might imagine, eels are mostly spine, but the little meat they did have was delicious, and the "green garlic" sauce was lovely.

After dinner, we said goodbye to Paola, who had joined Simon and myself for dinner, and said hello to Brian, who came out to down some beer with us. We headed to what must be the Beer Mecca of the world, the Délirium Café, the Guinness Book (and they should know beer!) record holder for the establishment with the most beers available. They have well over two thousand beers to choose from, and each year they advertise that they have [whatever the year is] number of beers (e.g. this year they have 2012), but the real number is probably comfortably higher. I immediately recognized their logo because it's one of the most memorable beer label logos I've ever seen: a pink elephant. When Simon handed me the menu to choose one, I nearly dropped it because it was like a freaking phonebook! 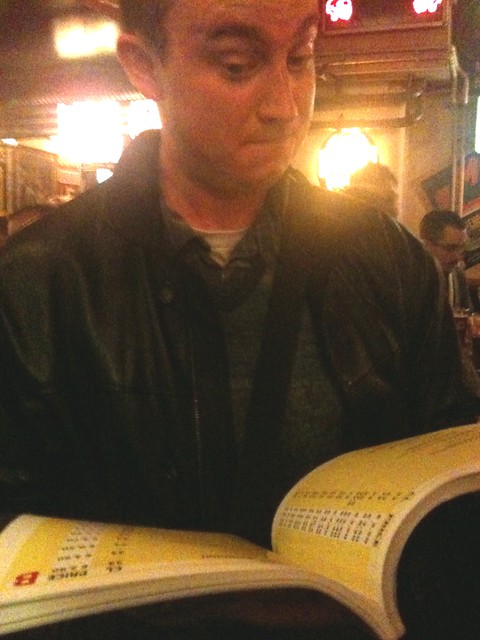 I was impressed. At a leisurely pace, we managed four rounds that night. If we did that every night, we could get through the menu in under two years. Sounds like a worthy Kickstarter project! 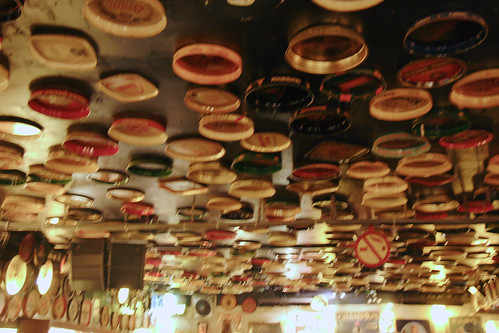 The ceiling was decorated with beer trays from various brands, all unique. 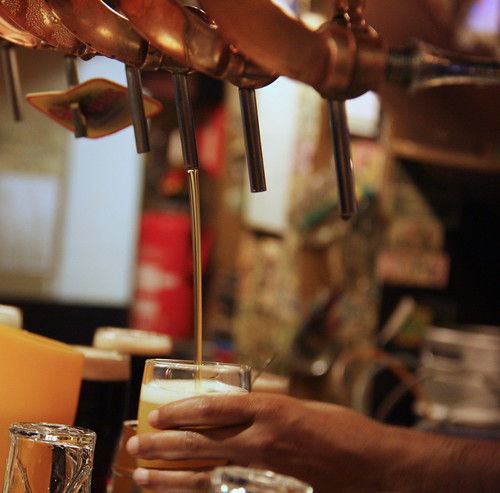 I noticed that having beer on tap is not given much importance in Belgium. There are many, many bars in the US with more beers on tap than the Délirium Café. Another thing about Belgian beer culture is that every single beer comes with it's own specially shaped branded glass. No one drinks beer directly from the bottle. 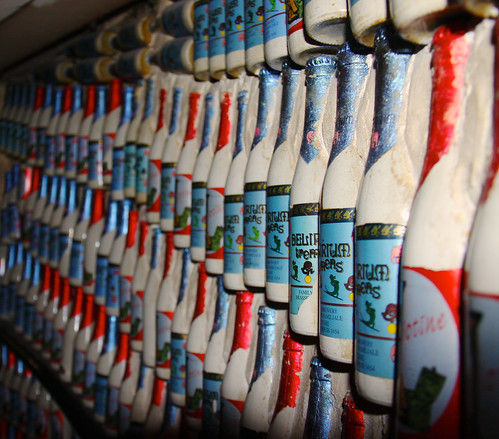 I wonder if my wife would let me do this in my home office? 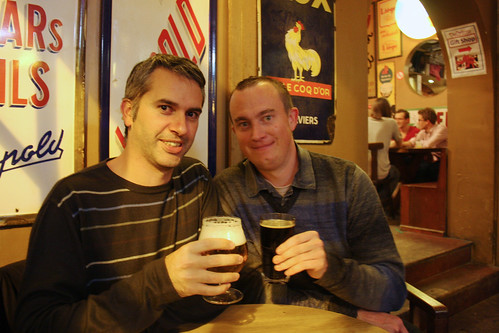 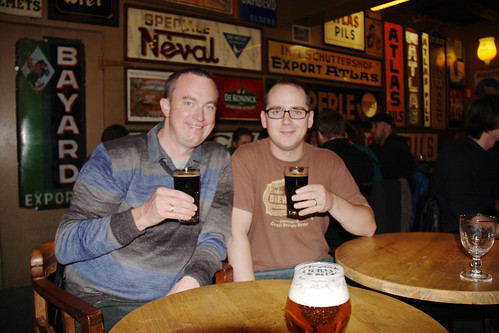 Erik and Brian raise their glasses. 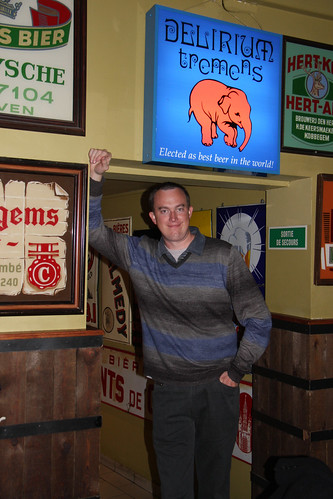 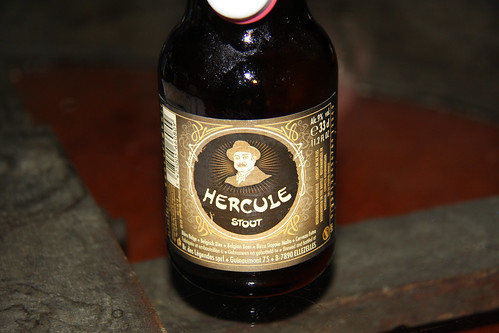 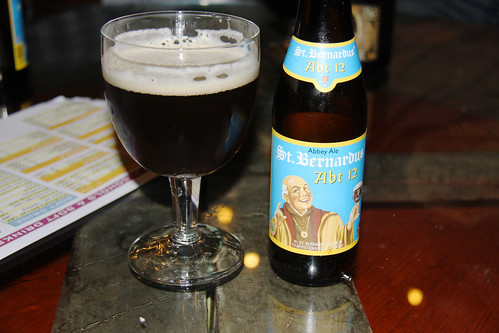 Most of the Belgian beer tradition comes from Trappist monks, it seems. 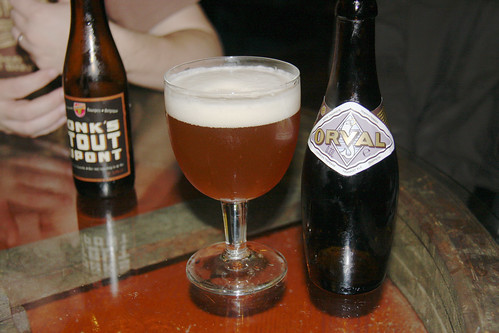 This Orval was tasty. 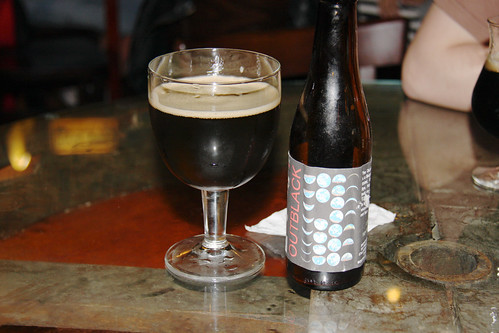 I liked Simon's Outblack bottle with its Earth phases design. 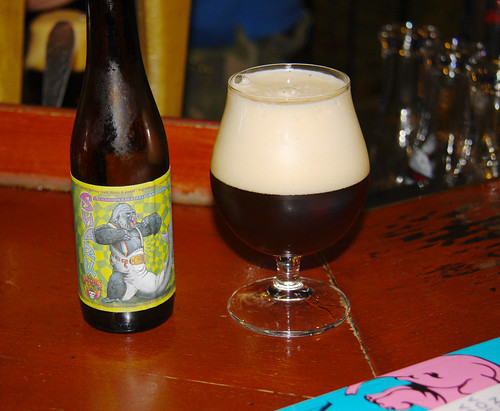 Shark Pants takes the prize for most bizarre label design, though, with a gorilla wearing a shark for a trouser leg. 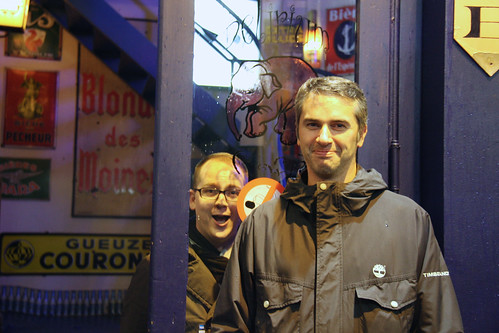 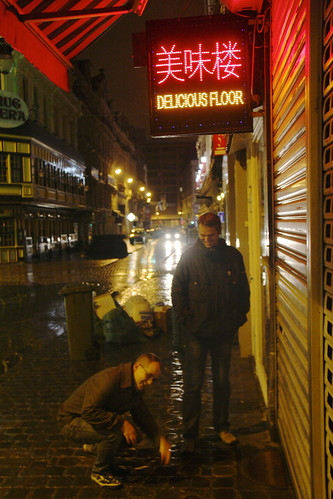 On the way to get a taxi at 3:00 AM, we discovered this Chinese restaurant that translated its name to Delicious Floor, which is somewhat funny when you're sober, but downright hilarious when you're not. 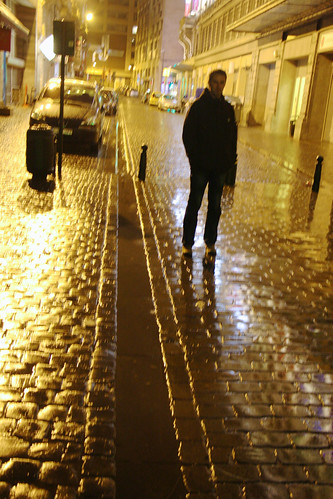 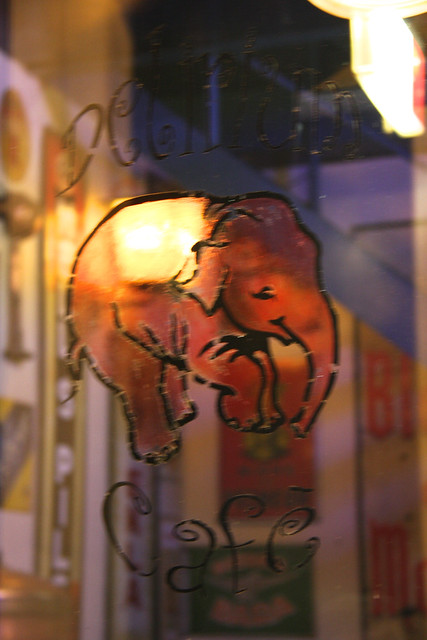 Good friends and delicious beer. If that's not worth traveling to Brussels for, I don't know what is.