This week, I am traveling to Brussels to meet some very good friends of mine, with whom I communicate on a daily basis, but whom I have never actually met in person. This is a very, very strange phenomenon which has only been possible since the rise of the internet. Maybe before the internet, you could have a pen pal that you get to know intimately before meeting, but that's not the same as feeling part of a social group dynamic like I do. Some people have a policy of not friending anyone on Facebook whom they have never met in person. I can somewhat understand the motivation behind such decisions. However, some of my best friendships are with people I've never met. Sometimes I am surprised by how much I care about them. Two of my online-only friends separated from their wives recently, and it really affected me; I was unhappy and found myself thinking about them a lot. Another fell in love, and I was absolutely thrilled. I've watched my friends' children grow up and I care deeply for them. This idea of feeling a sense of love and community with people whom I have never touched and, in many cases, never even heard their voices, is extremely weird. But I assure you, it is very, very real.

In fact, I bet some of you reading this right now follow this blog, but have never commented (and thus I don't even know you exist), feel like I am your friend, and you care for my daughter. Bizarre, huh?

This week, I will be meeting six friends I have never met. Eight, if you don't count a 15 minute chat in an airport lobby, plus five kids I've watched grow up via the internet. It got me thinking about the relationships I have on Facebook… How many have I met? How many do I expect to never see again? How many have I not seen in over a decade?

So I decided to whip up a spreadsheet. Of my 229 Facebook friends that are actual humans (not businesses or duplicate accounts), I see 17 on a weekly basis, and 38 on a more-or-less yearly basis. Those are friends for whom an effort is made for us to meet on my annual trips to the US or to southern Spain. The vast majority, 97 of them, are old friends, coworkers, or classmates whom I have not seen in over a decade. Facebook has brought me closer to some of them, but others are just kept for gossipy nosing into their lives and for comparing how their lives are going compared to mine (you know you do that, too!). There are 84 people whom I would not be at all surprised if I never see them again. That sounds mean, but we just don't mean enough to each other to make an effort to travel to meet up. Oh well.

And finally, 7 of my Facebook friends are people I have only ever met once. Most of those were internet friends, like Erin and Theresa, where an effort was made to get together. Every time it has been a pleasant experience, so I have high hopes and not many worries about whether or not my Belgium friends will enjoy my company. I'd be lying, however, if I said I wasn't a little nervous. For many of them, we've never seen each other's mannerisms or heard each other's voices except for brief clips from videos of our children. Even though we all have the technology available, we've never spoken on the phone or done a video chat. It seems to be an unspoken rule. I wonder why?

Naturally, I made a pie chart. 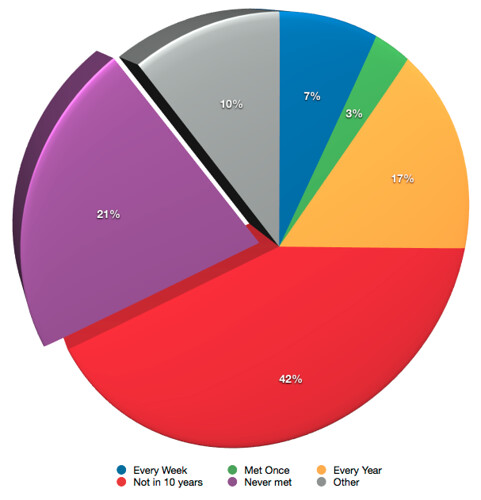 By this coming weekend, the purple slice will be down to 18% as six people move to the "Met Once" green slice. Of course they are all disappointed that my wife and daughter cannot go with me, but on the bright side, that provides motivation for them to come visit us.