State of the Offspring Address - September 2012

The big news this month has been Nora starting school. Her Period of Adaptation will end at the end of September, and in October she will be going the full five hour school day. She has taken to it wonderfully! Before she used to ask me two questions every morning, "What day is today?" and "Do I have to go to daycare today?" On weekdays when the answer was affirmative, she would be sad. But now when she asks if she has school today, she gets excited. She loves it! She goes in without any complaining and comes out with a big grin on her face. We all couldn't be more pleased about the situation. 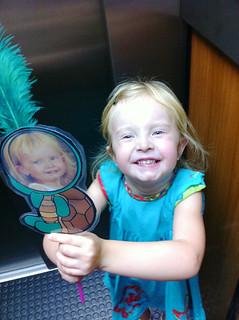 One day, as we were walking to school, we came across another boy from Nora's class walking with his mother. Nora's initial class the first week was with one other girl and six boys. To engage them in conversation the boy's mother and I were asking our kids if they were excited to see various members of their class, listing their names. The boy's mother said, "And Nora's going to be in class, too!", to which the boy responded, "Yes, but [the other girl in the class] is prettier!" His mother was mortified and speechless for a few seconds before scolding him for saying such a thing in front of Nora. Whatever, he's crossed off the potential son-in-law list.

I've been having fun asking Nora about what she did in school each day, although it's only been for an hour most days. Sometimes she'll tell me that they read a story or painted or sang a song, but sometimes she'll refuse to give any details. I also ask her to tell me about anyone who misbehaved in class. One day she told me that a certain boy was playing with a pirate hat and another boy came to take it from him. A struggle ensued in which the hat in question was destroyed, "And now there's no more pirate hat." 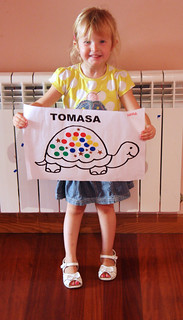 Their class mascot is a turtle named Tomasa. It's not a real turtle, but a big stuffed one. The kids will eventually take turns taking Tomasa home over the weekends. Apparently they used to use real turtles, but it turns out three-year-olds aren't that well suited as reptile caretakers. Tomasa, the children are told, has very sensitive ears and doesn't like it when there's a lot of yelling in the classroom. Every morning they sing a song about her. So far we only know two lines.

Tomasa the turtle travels with her house,

and although she falls behind, she always will arrive

One day, Nora came home from school and was beside herself with the hilariousness of chanting, "¡Caca, culo, pedo, pis!" repeatedly. For those of you without infantile Spanish potty vocabulary, that translates to "Poo-poo, butt, fart, pee-pee!" We did our best not to encourage repetition, but her enjoyment was often so infectious that we couldn't help cracking a smile. When she told us that her teacher had taught it to her, we were a little shocked. Surely not, we thought! A subsequent meeting with the teacher and all the parents, however, revealed that they are doing a "scatological themed" project which features bodily functions usually performed behind closed bathroom doors. My intellectual side is very pleased by this, but is constantly battling with my visceral social taboo reaction to the subject. Of course the very fact that she thinks that string of words are funny is because she's internalized some of society's discomfort about the subject matter. 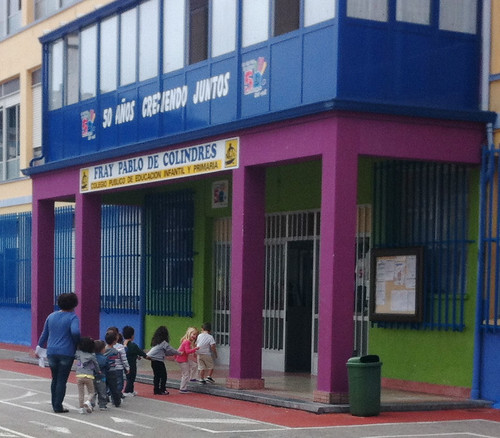 They form a "train" to go into the school, with each kid grabbing the shirt of the one in front. Nora and her classmates think this hilariously fun.

Nora is often so excited to get to school that, when her teacher comes out of the school to collect her class, Nora will run at full speed and slam into the legs of her teacher. Once she even ricocheted off and fell flat on her bottom. Again, we couldn't be happier. 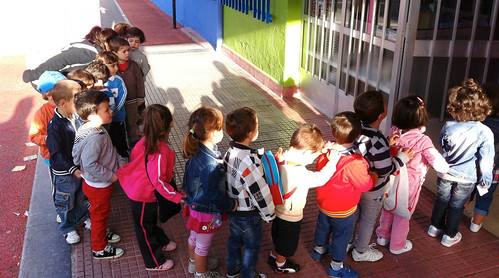 The longer train with all the kids. Nora was the caboose.

These last two days of September, she is going to school for 3.5 hours in the morning. This requires getting up about an hour earlier than usual and going with all 24 kids. When she came home after her first 3.5 hour school day, she was mentally exhausted. She wouldn't tell me anything about her day and had sort of a blank stare. Eventually her brain had processed all the stimuli and she could tell me about things she'd done. 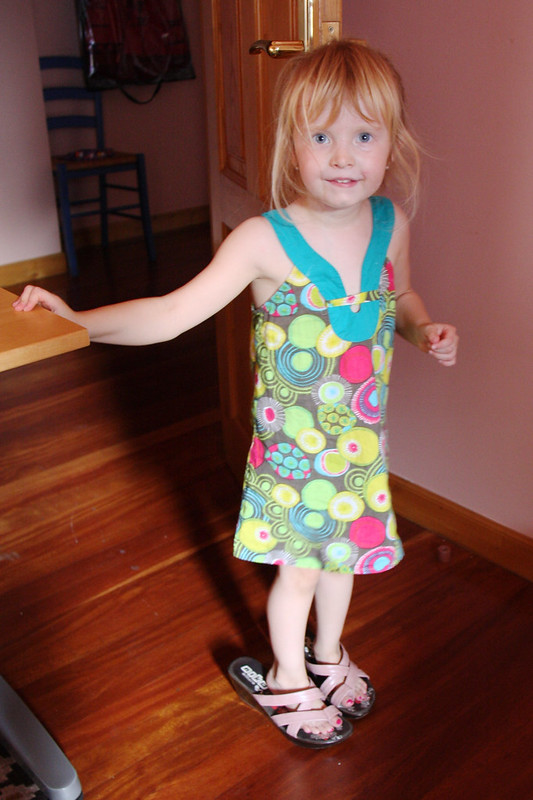 She'll fill her Mommy's shoes soon enough. The state of the offspring is strong!