State of the Offspring Address - August 2012

Nora spent most of August vacationing (from what?) in Extremadura, southern Spain, with her abuelos, drinking grape juice, splashing around in water to stay cool and bossing her abuelos around. She came back the most tan she's ever been, slightly taller and happy to be home. When she was away from us, we would talk on the phone each day. We could usually get a few responses out of her about what she had done or eaten that day, but then she would say, "I'm sad because I go away." Once we hit that wall, every response from her was the same sentence, verbatim, as she slowly slid into emotional tears. It was her way of saying that she missed us. Once the phone was back on the hook, however, she went back to playing happily. 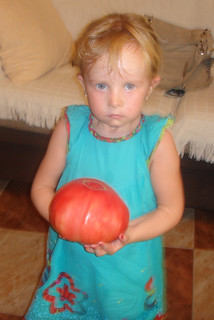 Since I've only been with her for a week this month, I don't have that many anecdotes to share. Incidentally, when I tell anecdotes about things she's said or done to people, she gets embarrassed and hides her face in her hands and tries to hide.

When she went to a wedding with her mother, she said (in Spanish), "Mommy, someone needs to tell the girl in the white dress that her dress is too long and is dragging on the ground!" She's all the time coming up with complete, logical thoughts like that.

Nora couldn't take part in many of the summer festivities on account of her aversion to loud noises and loud music. While some three year olds were hopping and spinning on the dance floors at some parties, Nora had to be holding someone's hand a hundred meters away from the speakers. And the Spanish penchant for setting off firecrackers and fireworks at festivals does not sit well with Nora either. On the one hand, I completely understand her dislike of loud music and noises, but another part of me is saddened that she's missing out on some fun that could be had. The I'm-strict-because-I-love-you father in me is hopeful that maybe this will curb her desire to go out dancing in the discotheques until sunrise as is the Spanish teenage custom, but I suspect that's naive wishful thinking. 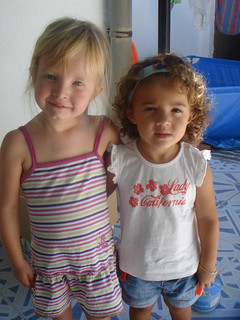 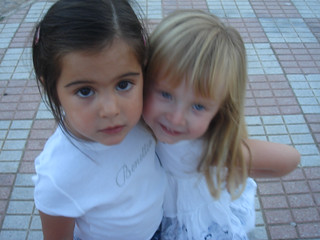 The other day, her mother was teaching Nora a song in Basque, translating each line into English as she went. One of the lyrics contains the word "nora", which is Basque for "where". When her mother sang that line, Nora said, "The song knows my name!!" I may have burst out laughing. 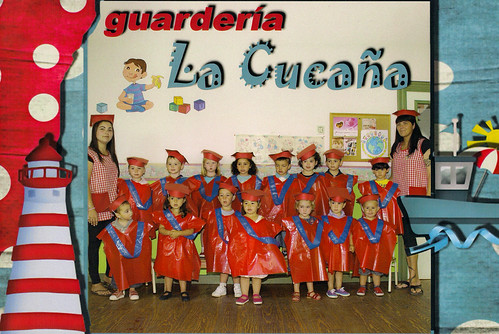 This is the graduating class of Nora's daycare/preschool. Since she only goes in the afternoons, there are several kids here that she doesn't even know. I had fun pointing to each one and asking her to name the kid. I think that only two of them will be in her kindergarten class.

We received a pamphlet in the mail today informing us of our pre-school parent-teacher orientation meeting next week. When I was reading the pamphlet, Nora said, "That's from my school, isn't it?" Astonished, I asked how she knew that, and she pointed to a little emblem in the top corner, which later this morning I confirmed is painted on the side of the school. Amazing!

I'm pretty sure that I'm more nervous about her starting school than Nora is. I'm very much looking forward to the meeting because I have no clue about how the school schedule works, since I have zero experience with the Spanish school system. I do know that the same class stays with the same teacher for the first three years. As such, it is very important that we make a good first impression on the teacher. It's a great system if you get along well with your teacher. Let's get this scholastic rocket to the launchpad! Wish us luck! 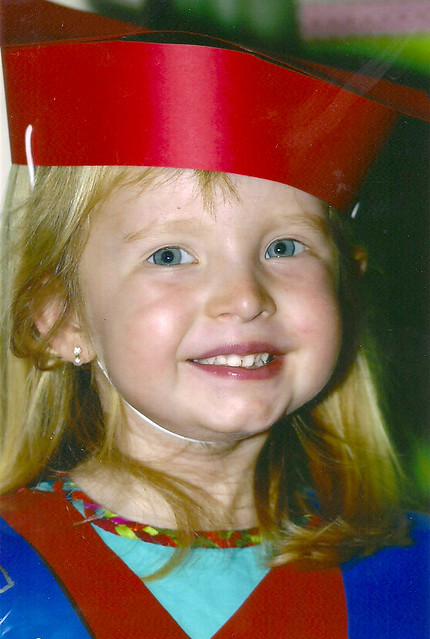