Last weekend, I attended the 18th annual Sauga Folk festival, held each year in my town of Colindres. The festival focuses on local, Cantabrian music and dance, as well as celtic music in general. Each year we get some pretty famous (as the celtic music scene goes) acts from Ireland and sometimes Scotland traveling here to perform. Due to collisions with August summer vacations, this is only the second year that I have been able to attend. 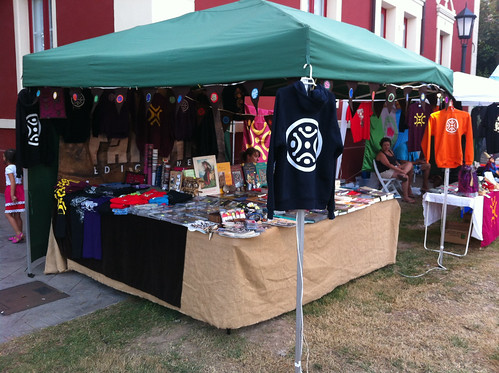 Every year, they sell t-shirts with the lábaru, an ancient symbol not to be confused with the Basque lauburu, that is related with Cantabria and has its origins in early Christian symbolism. 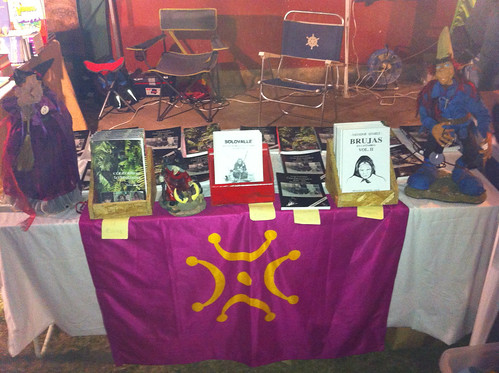 Like any anciently pagan mountainous region, we have plenty of folklore about witches…and people to sell books about it. 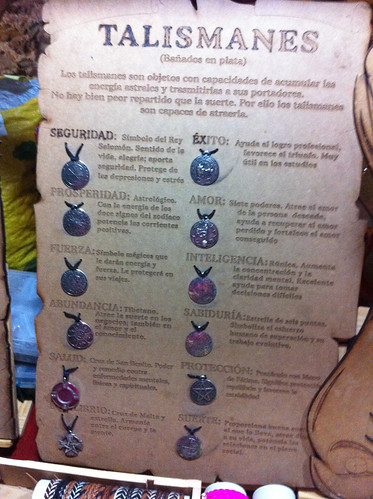 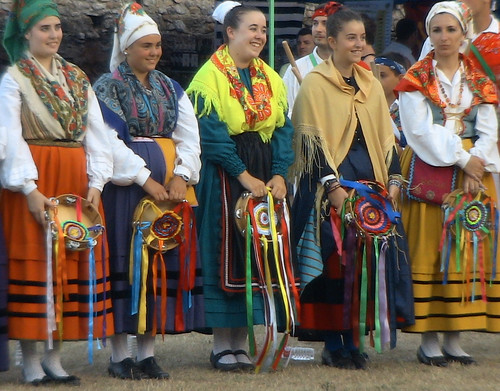 The first act I saw was the dance troupe, Virgen de Palacios, from the nearby village (collection of villages, really) of Voto. Their narrator, one of the dancers who took the microphone to introduce each dance, explained the traditional nature of each dance and when, during the year, they typically dance each one. At one point, the dancers shouted, "¡Viva Colindres!", and, in a poignant unscripted gesture, the crowd responded, "¡Viva Voto!".

Some comments… All the music was a single clarinet and a snare drum. The littlest kids were pretty adorable. Just when I thought, "Of course the boys like signing up for the stick bashing dances!" they came out with the floral arcs and did dances with those. The way the dresses move are very visually pleasing. The narrator spoke of how the pole-and-ribbon dance is very similar to other European maypole dancing, but with slight differences. The way they weave the ribbons together and unweave them was lovely. How cute is their microphone stand? My favorite lyric from the song the women sing was, "I love my mother-in-law because she's the mother of my love."

About this time, I went to the bar for my first beer of the night. In a common and understandable practice for bars in which amateurs are operating the bar, you had to buy tickets (colored slips of paper) for drinks at one 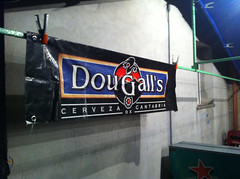 place with the cash box, and then the bartenders would make your drinks and rip up your tickets. I went to order a beer, and the bartender said, "Hey, would you like to try this Cantabrian beer, DouGall's, we're offering today?" Ever up for new beverage experiences, I agreed. It was quite good. It was stronger than your typical Spanish lager, with a lot more flavor. When I ordered my second, I inquired about it, and was told that, although it's brewed in Lliérganes, Cantabria, it's made by an English bloke, who markets it as a "real ale", which means something to English beer connoisseurs. The fourth one (the plastic cups were tiny and overpriced) I ordered from that same bartender was given to me on the house. 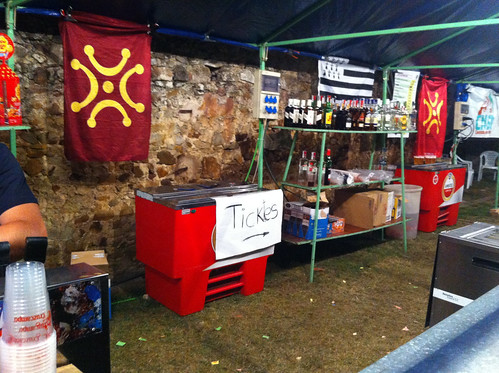 The Spanish word for "tickets", in the voucher sense, is just "tickets", except your typical Spaniard has trouble or doesn't bother pronouncing the second T. So when someone tried to solve the problem of people trying to pay with money without buying their tickets from the ticket counter, they wrote "Tickes" on a poster. Clearly someone else told them, "You forgot the T at the end", and they added it in the wrong place to make "Ticktes".

When the sun went down, it was time for the real concert to begin, a lineup that included some local Cantabrian music, an Irish folk band named Máirtí­n O'Connor Band and some other Spanish rock/folk music. By the time the Irish folks finished, it was 3:00 AM and I went home, opting not to OD on craic. The Irish band did a lot of talking between songs, in English, explaining the nature of each of the songs and adding some pretty weak jokes. Of the hundred or so people around me, only one or two seemed to laugh in the right places to denote some understanding of what was being said. An inebriated group of lads near me kept shouting an English phrase they knew, "I love you!" at the band.

I enjoyed the music a lot, and I hope you do, too. I can't be certain that I would've picked it up, but once the Irish band told us that one of the songs was copied from George Frideric Handel, I immediately picked it up. See if you don't notice a bit of Queen Sheba around the 5:45 mark.

I'm already looking forward to next year. You can't beat a concert you can walk to in five minutes that's just out of earshot of your bedroom window!