On the evening of August 6, we arrived in Higuera de la Serena, my wife's family's summer town in Extremadura, the original hometown of her maternal grandmother, and town where her mother grew up. Despite only having known my wife for fewer than twelve years, this was the third time I have watched the Summer Olympics from Extremadura, having visited every August since 2003. 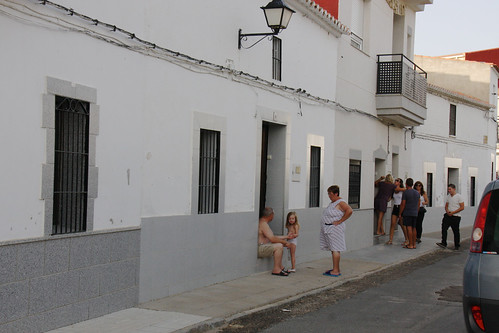 This is our house, the door and two windows in the middle. This was the first summer without the owner of the house, our beloved Abuelo, who passed away last December.

One of the first days of my week there, we went to a nearby reservoir, the Embalse del Zíºjar, to a beach and picnic area to spend the day with some friends keeping cool in the water. We had a bit of trouble finding it, because every single town we passed advertised "playa" (beach), because they had a little body of water with some picnic tables like the one we were looking for. For being a landlocked region of Spain, Extremadura sure has a lot of beaches! 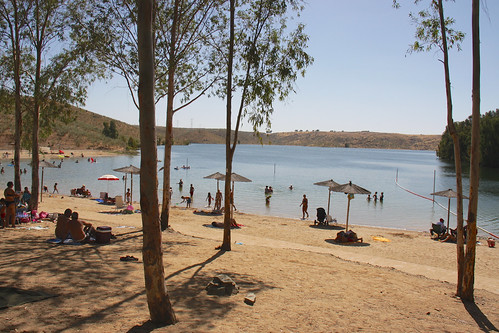 The place we eventually settled on was called Isla Zíºjar, but don't bother looking for it on Google Maps, because it doesn't exist. It's a spot only locals know about. The sand, while nothing like the powder we have up north in Laredo, is just fine enough so that you can walk easily barefoot. The initial entrance to the water was downright frigid, but once accustomed, was quite lovely. 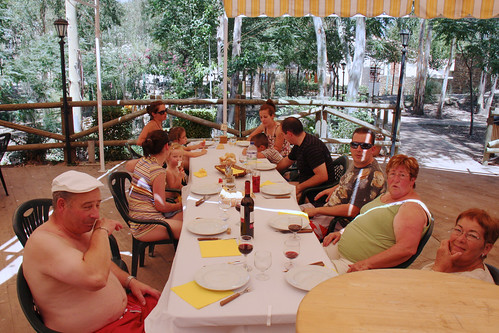 We ate a big paella for lunch. 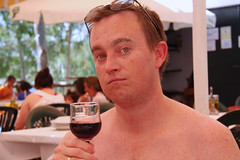 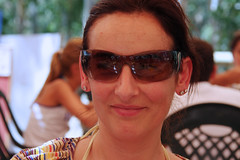 There were some very attractive people there. 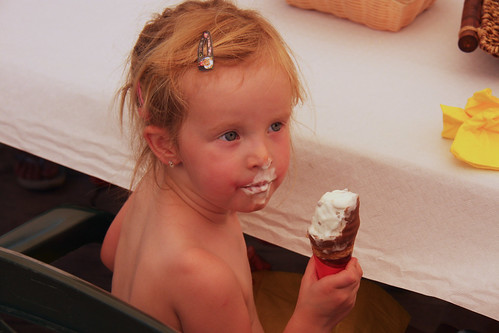 Ice cream is great when you have no clothes to stain. 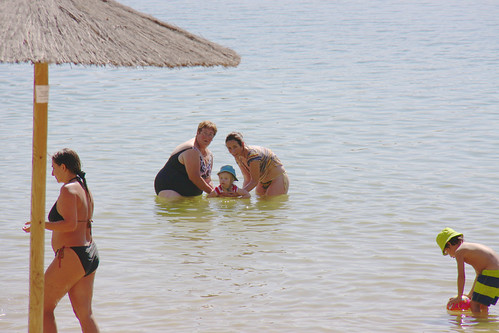 Nora adjusted quite well to the water. Eventually she was able, with an inflatable ring, to swim several meters back and forth between her parents, using a canine "just pretend you're running" sort of stroke.

I was pleased that we spent several days on the standard summer vacation schedule: wake up, eat fresh churros, run zero or one errands, go out to the bars for los cortos (small beers and snacks in a half dozen bars), optional lunch (I declined every day), nap, sit around for a bit, go for a walk, dinner, and bed. 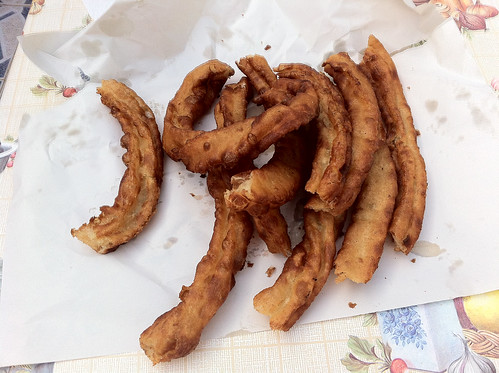 The guy that makes churros in Higuera de la Serena is the best churro maker in the world. 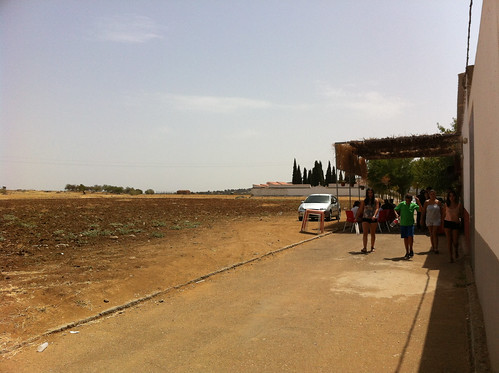 Walking between the bars is a matter of bearing 40Â°C (104Â°F), or more, direct sunlight. Move slowly and stay in the shade where you can. 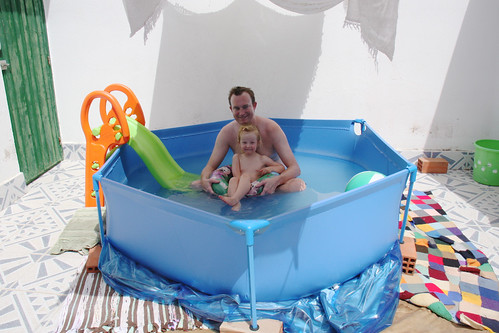 Since Nora, inexplicably, is rarely capable of napping, I didn't get much napping done either, spending the very hottest part of the day in the pool with her.

We got a brand new swimming pool this year. The previous one, which was at least thirty years old, purchased when Marga was Nora's age, finally succumbed last year to rips caused by a freak hailstorm. The new one is the exact same design, such that I imagine the old joists, legs and pins would probably work in the new pool's frame. The new one is slightly smaller, but is compensated by coming with a slide! 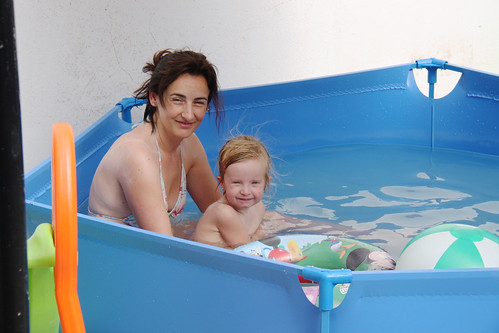 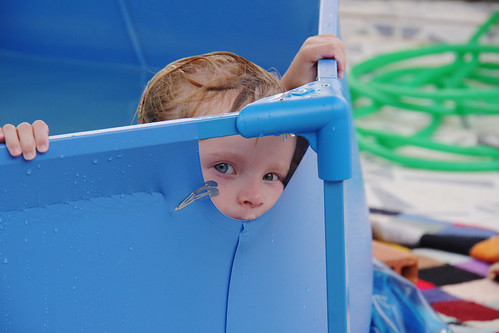 The best part of this pool's design are the secret spy holes. 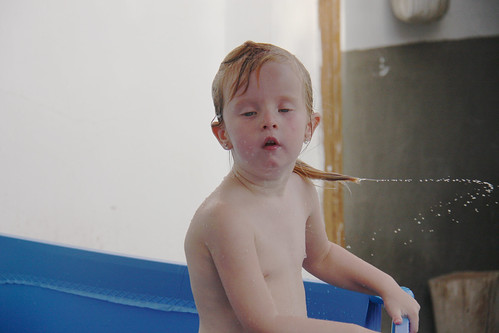 With some practice, I taught Nora how to hold her breath and put her face underwater. I recall as a child putting my face underwater and thinking I was doing the same as the kids who were diving all the way under. 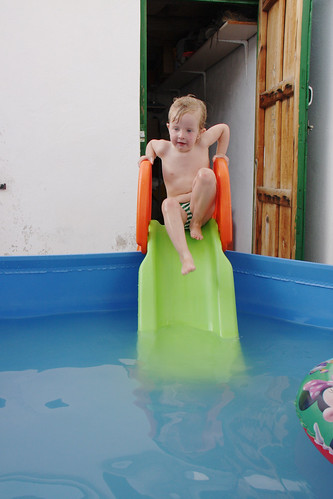 The slide was a big hit. 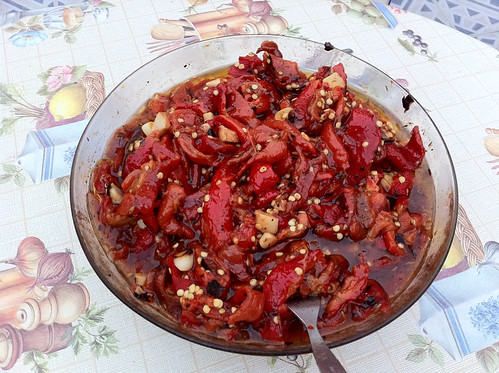 One night, after a barbecue dinner, my in-laws pulled out a bunch of red peppers and began roasting them on the barbecue, turning them jet black. Then they would take them off, let them cool a little, and peel off the black skin and rip them, with bare hands, into strips. They did the same with cloves of garlic. Add a little olive oil, salt and vinegar, and you get this amazing roast pepper salad. It was wonderful and combines perfectly with grilled meat. 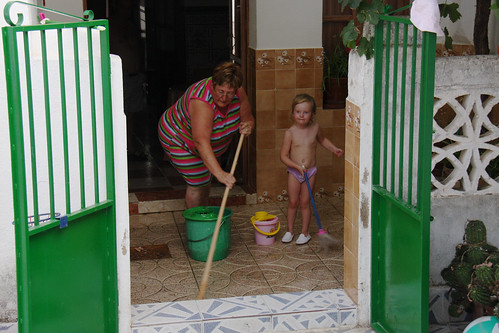 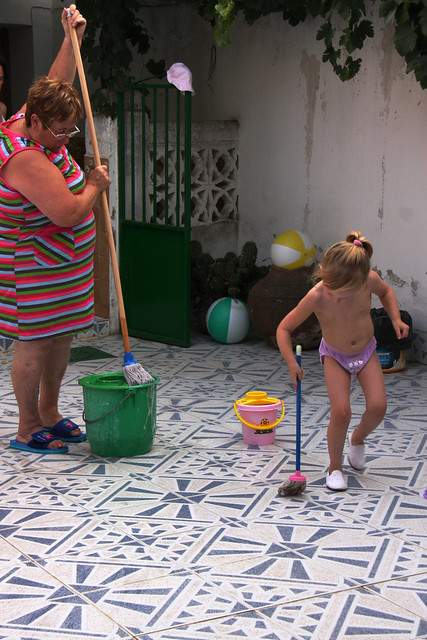 It's hard to learn proper technique when your little kiddy mop is only half your height, when regular adult mops are the full height of an adult. 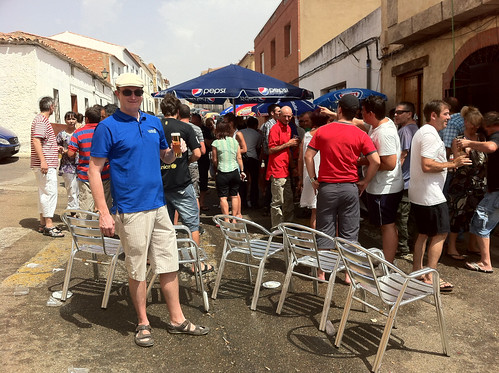 On the very hottest day, after we had done our regular round of the seven bars, my wife and I decided to attend a party at another bar. It was 44Â°C (111Â°F) in the shade and these people were dancing and partying outside in the sun like it was nothing. Just when we were about to head home because we couldn't bear it any longer, the bartender turned on a hose and hosed everybody down. Call me normal, but I'm not a big fan of being sprayed with water by surprise, but in this instance it felt absolutely divine. So we danced and partied a little longer… 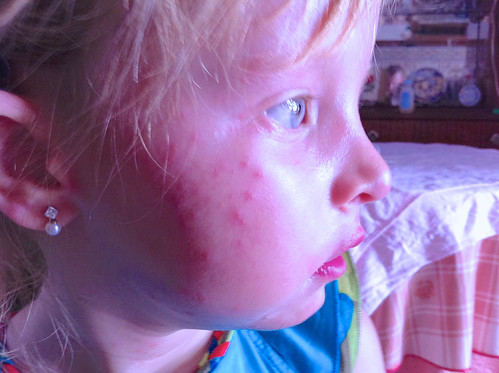 Nora ended up with this red rash that I've named "heat zits". They're definitely related to sweat, and I get them too on the inside of my elbow and knee joints where the sweat accumulates without evaporating. A day after returning to the humid, but cooler, north, mine were dried up and almost gone. 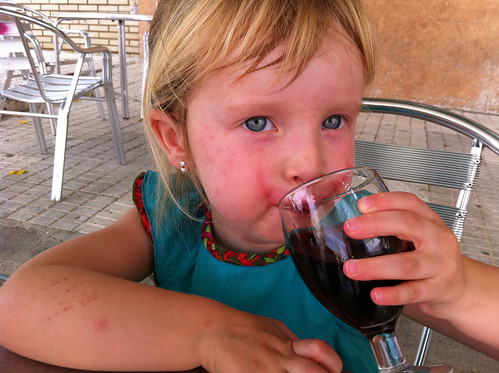 When we went out to bars, Nora usually ordered a salobreña, a dark grape juice made to resemble red wine, even down to the bottles they pour it out of. In most of the bars, I took a sip of her drink before giving it to her, both to reduce the likelihood of spillage and to verify that it wasn't actual wine. It is, however, delicious! 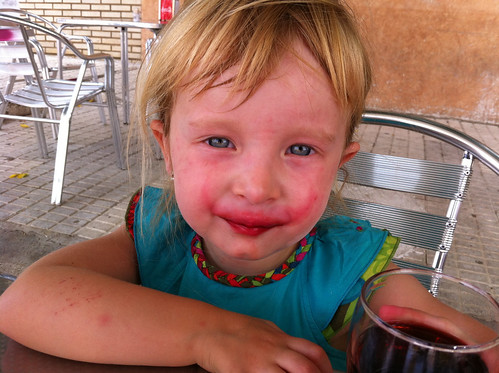 The result of her salobreña drinking was a red arc, made longer by her constellation of zits, that made her look like someone had painted a smiling clown face on her.

On my last night there, we went out to a big party thrown because our neighbors, who I have come to know over the years. They had a wedding coming up the following week. It was sort of like a combination of bachelor party and bachelorette party, since both bride and groom were there. Food, music and barra libre.

Between my second and third gin & tonic, I gazed up into the sky, as I often do in Extremadura at night, to check out the stars. One star was particularly bright, and I assumed it must be a planet, probably Jupiter. As I was looking right at it, it slowly faded away and vanished. I rubbed my eyes and double checked, but it was gone. It was definitely the most bizarre phenomenon I've ever witnessed in the skies above. Given that I saw it on the night between August 11 and August 12, at the absolute peak of the 2012 Perseids meteor shower, I can only conclude that I witnessed a meteor head-on, which burned for a good five seconds. The vast majority of meteors never reach the ground to become meteorites, but, should I ever witness a meteor coming right at me again, I think I might seek cover.

On Sunday, August 12, I drove the seven hours back home just in time to watch a spectacular gold medal basketball match between my two countries, Spain and the US. Marga was going to come back with me, but she got a call from her boss offering her a second week of vacation, so she stayed.

As always, I had a wonderful time, especially because I could see how happy my daughter was on her summer vacation. We're going to let her stay a fourth week before beginning her scholastic career in September. 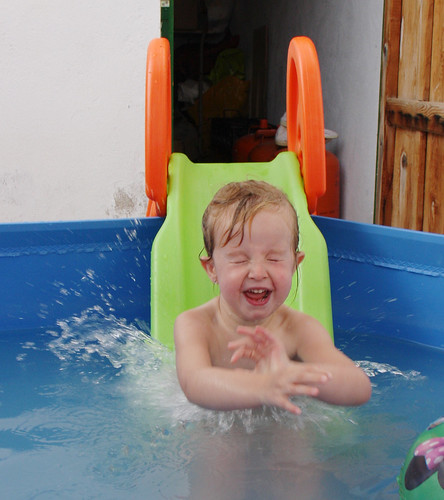